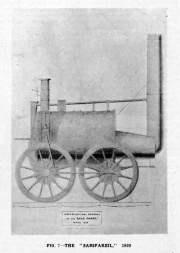 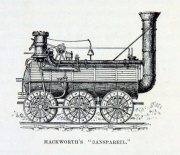 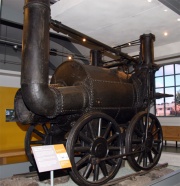 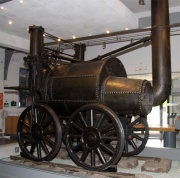 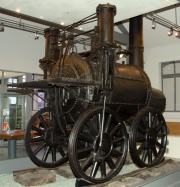 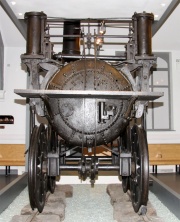 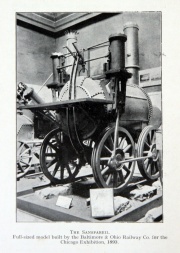 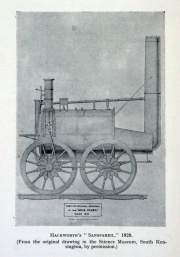 Sans Pareil was a steam locomotive built by Timothy Hackworth which took part in the 1829 Rainhill Trials on the Liverpool and Manchester Railway, held to select a builder of locomotives. The name means, roughly, 'Without equal' in French.

While a capable locomotive for the day, its technology was somewhat antiquated compared to George and Robert Stephenson's Rocket, the winner of the Rainhill Trials and the £500 prize money. Instead of the fire tube boiler of Rocket, Sans Pareil had a single flue tube. To increase the heating surface area, the flue passed in a U shape within the boiler; the firebox and chimney were both positioned at the same end, one on either side.

Sans Pareil had two cylinders, mounted vertically at the opposite end to the chimney, and driving one pair of driving wheels directly - the other pair were driven via connecting rods, in the typical steam locomotive fashion.

At the Rainhill Trials, Sans Pareil performed very well but had a strange rolling gait due to its vertical cylinders. The 'blast' from the blast pipe was, in Hackworth's trademark style, very strong, so most of the coke was expelled out of the chimney unburnt; and it was this more than its antiquated design that caused its abysmal fuel economy. It was pulled out of the competition because of a broken feed pump. After the trials, the Liverpool and Manchester Railway bought Sans Pareil as well as Rocket, and it exceeded Rocket's service life by serving on a branch line for many years.

It then worked on the Bolton and Leigh Railway until 1844, when it was sold to the Coppull Colliery, Chorley and used as a stationary engine until 1863 when it was presented to the Science Museum.

A replica locomotive built in 1980 is now preserved by the National Railway Museum at its new Shildon Locomotion Museum annex.