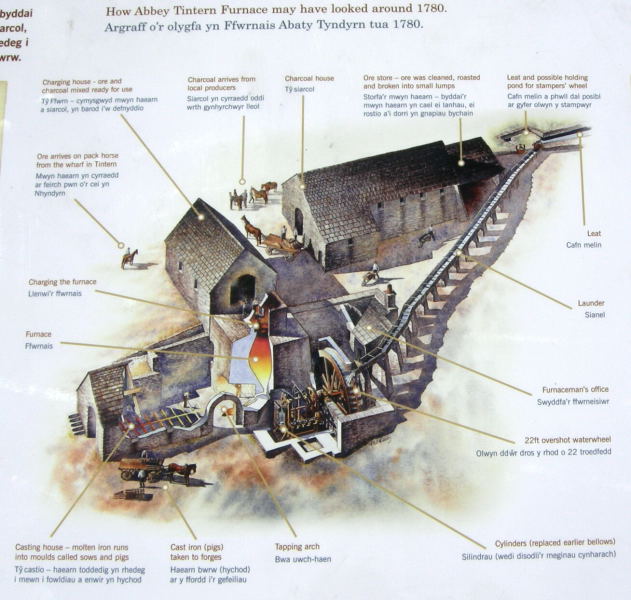 Display board at Abbey Tintern Furnace

Abbey Tintern Furnace, 2012. The pit for the water wheel can be seen to the right of centre

The Abbey Tintern Furnace is situated in the Angidy valley approx 1 mile west of Tintern Abbey.

Th site played a role in the advance of the Industrial Revolution. It is said that it was the first blast furnace to use cylinders (pistons) to provide the blast rather than bellows [1]

1556 a metal working centre was established at Tintern to produce a fine quality iron wire, primarily for use as carding combs in the rapidly expanding woollen industry.

"Near this place in the year 1568 brass was first made by alloying copper with zinc" - plaque on the site today[2].

Wire-making soon followed, with mills situated on all of the tributaries of the Lower Wye - the Angiddy, Whitebrook, Redbrook, Lydbrook and Bishopswood[3].

The blast furnace was operated by the Mineral and Battery Company which received its iron from Monkswood and Pontypool but disagreement with the supplier, John Hanbury, over the quality of the material led the company to erect its own furnace and forge at Tintern and thereby centralise production into an integrated unit.

1669 The first definite record of a furnace being operated in the valley was by the Foley Partnership, a family group (led by Paul Foley (c.1645-1699) and Philip Foley (1648-1716)) with interests in ironworking in the Forest of Dean and South Midlands.

The majority of the pig iron was converted at local forges for use in the wireworks in the valley, but some small-scale casting of domestic objects may have taken place,

In the context of the charcoal iron industry (in the 17th century?), 'the works at Tintern Abbey produced peculiarly malleable and ductile material, suitable for rolling into sheet-plate and drawing into wire' [4]

c.1720 - 1730 Tintern had one of the ten blast furnaces in the iron-making district of the Forest of Dean. Perhaps surprisingly, we find that later in the 18th century Tintern was getting most of its iron ore (seven-eighths) by sea from Lancashire, the balance being a lean calcareous sparry iron ore from the Forest of Dean, called flux [5]

1798 Advert: 'MONMOUTHSHIRE. IRON WORKS. - TO be LET, and entered upon immediately, ALL those Capital IRON and WIRE WORKS, called TINTERN ABBEY WORKS, situate upon the Banks of the navigable River Wye, four miles from Chepstow.
The Iron Works consist of a Charcoal Furnace, a Foundery, two Pair of Stampers, two Forges, one of which has been worked as an Osborn Forge, with two Fineries, the other as a Merchant Iron Forge, with one Finery and a Chafery.
The Wire Works are composed of three Tilts, ten Pair of Tongs, ten Blocks, ten Scowring Barrels, with Wheels and Gearing complete, have made 7000 Bundles of Wire per annum, and are capable of great improvement.
The whole of the Works are well supplied with water, are within the distance of one mile and a half of each other, and in the thousand Acres Coppice Woods, belonging to the same Proprietor, which will go with the Works at a reasonable price per cord.
Pit Coal of the best quality is brought up the River duty free.
N. B. As the Machinery is intended to be considered as a Fixture, and is now in a working state, the Works may be set going as soon as a stock of Charcoal can be got, and there are Woods now ready for cutting, which will furnish a regular supply, and keep the Furnace constantly in blast. None of the Woods exceed the distance of ten miles.
The whole will let to a good Tenant upon reasonable terms, together with four Farms which have been occupied with the Works for many years, and are in a high state of cultivation. The Stock at the Works and on the Farms to be taken at a fair valuation.
For further particulars apply to Edmund Estcourt, Esq; No 2, Stone-buildings, Lincoln's Inn, London ; Mr. Turton, Attorney, at Chepstow; or Mr. Richards, Troy-House, Monmouth.— Either of the latter will shew the Premises.
N. B. A considerable Quantity of Cordwood is now ready to be coal'd within half a mile the Furnace, and may be purchased at a fair price.'
Gloucester Journal - Monday 16 April 1798

By 1815 Robert Thompson was the proprietor

1828 The furnace went out of blast but was subsequently used by David Mushet, the Coleford metallurgist, for a series of experiments on the smelting of Indian wootz ore which had been instrumental in establishing an advanced charcoal iron industry in India [6]

Other Examples of Early Industry in the Area

The Wye Valley Area of Outstanding Natural Beauty have produced an excellent range of free leaflets, including one called The Angidy Trail, made freely available in many shops and cafes in the area. The Angidy Trail takes walkers to various site of industrial archaeological interest, including the locations of three wireworks which used the iron produced at Abbey Tintern Furnace.