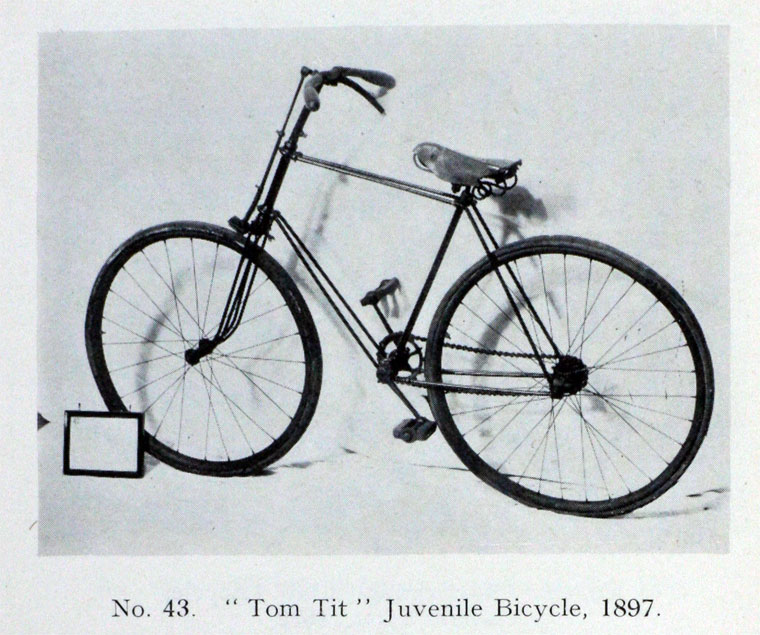 The company was registered on 4th January, 1897, with a capital of £10,000, the manager being Arthur Goodwin, a very well-known trade personality, who had previously been associated with the Coventry Machinists Co.

Goodwin was originally a partner in the firm of Stanley and Goodwin of Southampton, who made a bicycle called the 'Southern'; in later years he was connected with C. A. Vandervell and Co, and was in their service at the time of his death, in September, 1927, at the age of 57.

The Tom Tit Co. confined itself to the manufacture of juvenile cycles, making a 'mixed' tandem and a girl's bicycle on the same lines as this boy's machine. The special feature was the frame. No illustration can do justice to the peculiar construction of this unique machine: no description can convey to the reader a full understanding of its peculiarities. The entire frame (with the exception of the front fork, steering post, and diagonal tube) is made from a single piece of solid steel rod about 0.5 inch thick. No join can be found in this piece of metal: it runs round the top and bottom of the steering head, completely round the bracket shell, forms a slot for the rear wheel spindle, and returns to its starting point, wherever that may be.