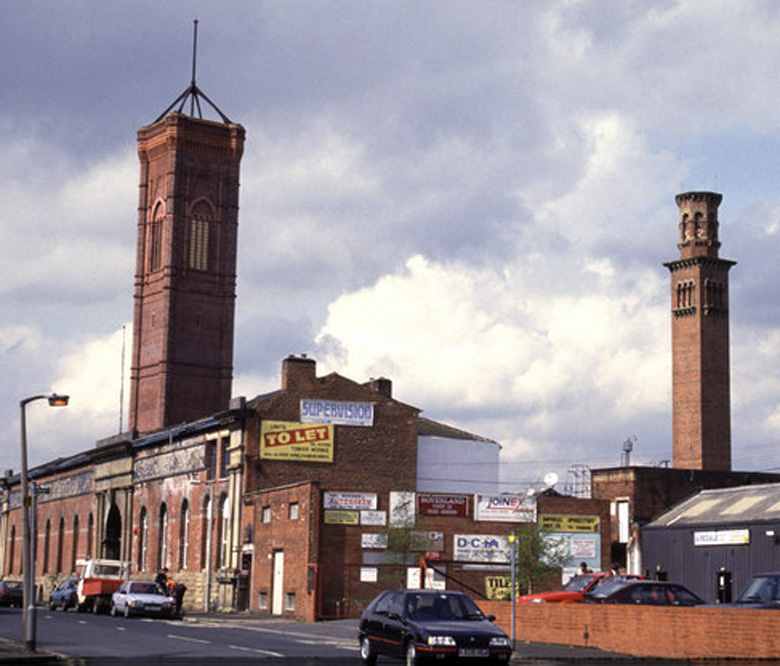 Tower Works is a former factory notable for its three listed towers. It is located on Globe Road in Holbeck, Leeds, West Yorkshire, next to the Leeds and Liverpool Canal. The Italianate towers of the factory are a distinctive landmark on the Leeds skyline.

The factory was founded by T. R. Harding to make steel pins for carding and combing in the textile industry, and the original buildings, by Thomas Shaw, were erected in 1864-6.

Harding's son, Colonel Thomas Harding, employed William Bakewell to extend the works in 1899. The design of the extension was heavily influenced by Harding's love of Italian architecture and art.

The most notable features of Tower Works are the three towers that give it its name and served for dust extraction from the factory. The largest and most ornate tower (1899, by Bakewell) is based on Giotto's Campanile in Florence. The smaller ornate tower (1866, by Shaw) is styled after the Torre dei Lamberti in Verona. A third plain tower, built as part of Harding's final phase of expansion in 1919, is thought to represent a Tuscan tower house such as can be seen in San Gimignano. All three towers are listed structures, the two ornate towers being Grade II* and the plain tower Grade II.

The design for the Giotto Tower included ventilation systems that were way ahead of their time in terms of minimising pollution from the steel works. The chimney incorporated a filter to remove the excess steel dust.