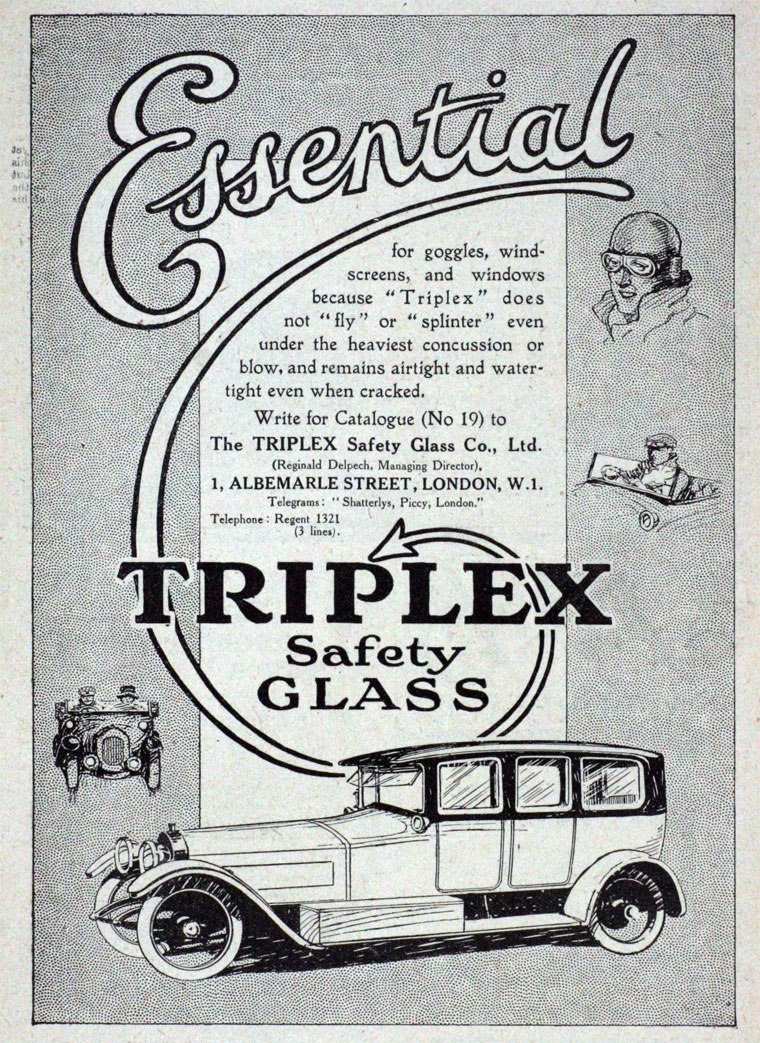 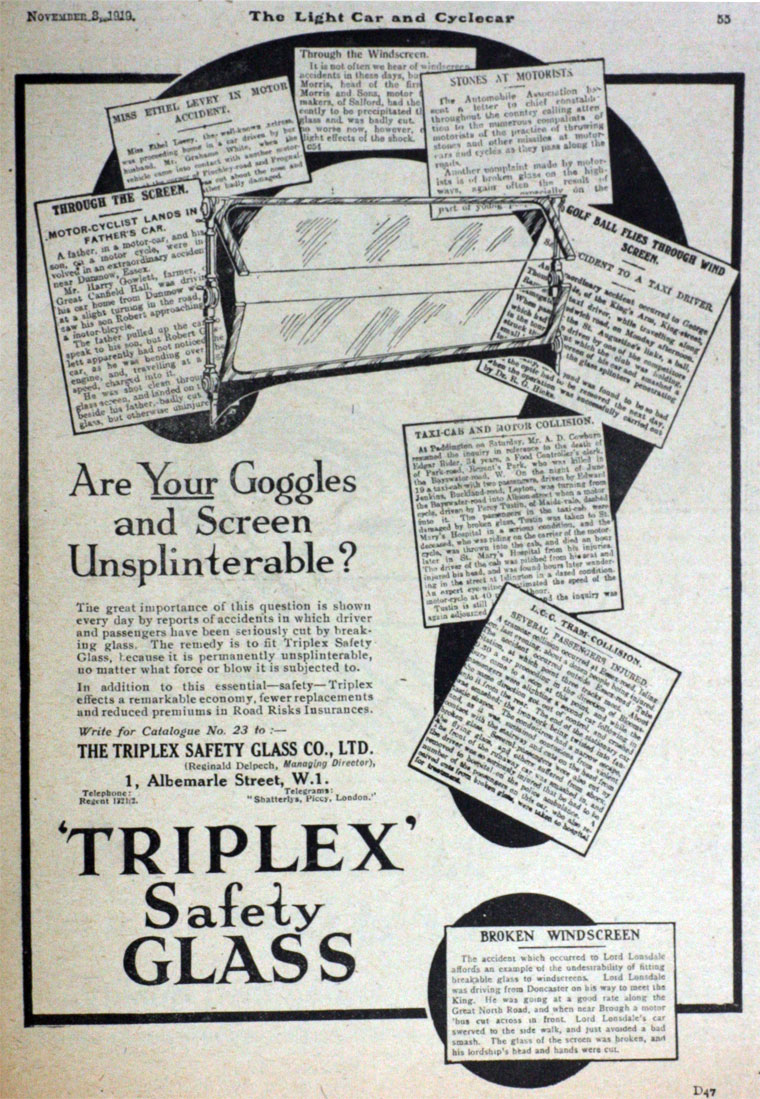 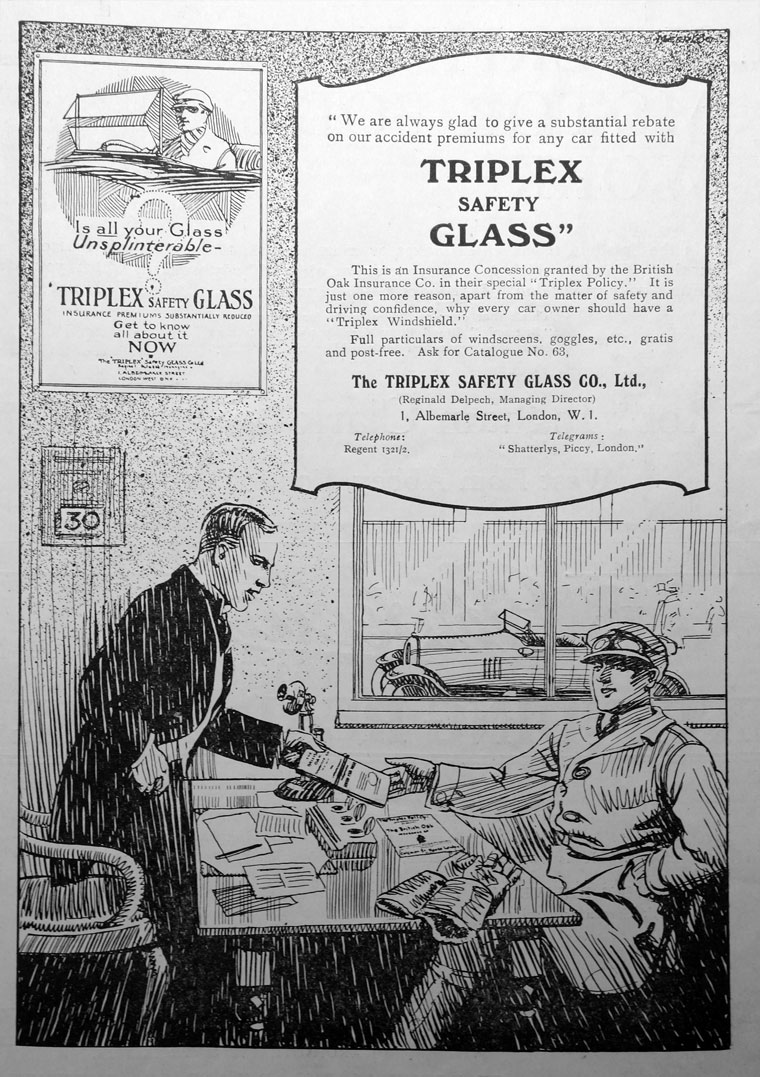 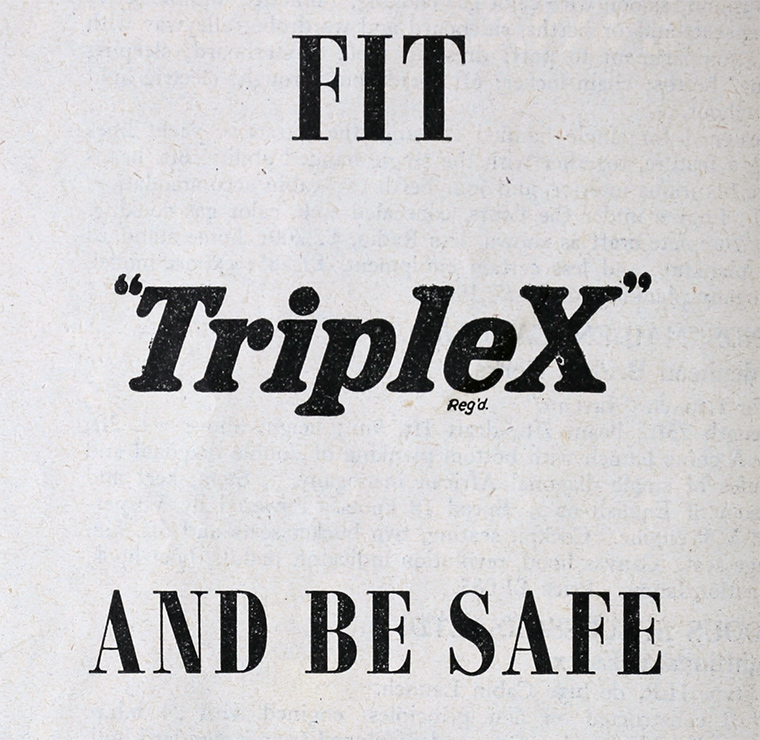 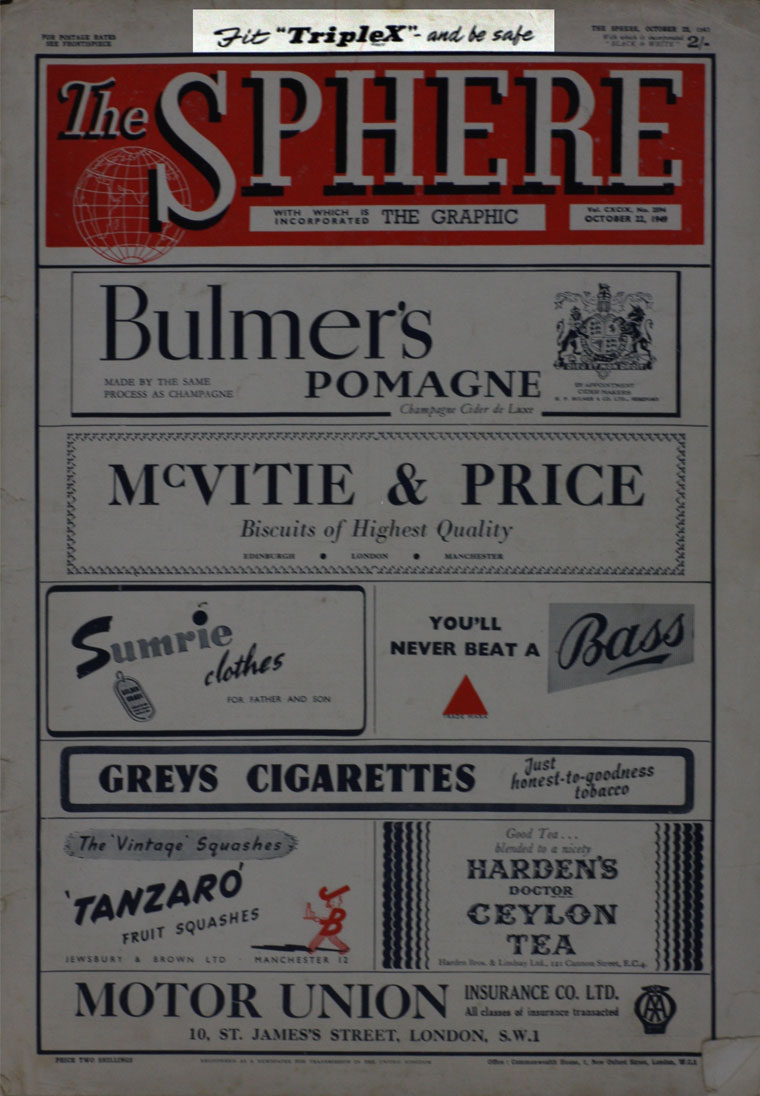 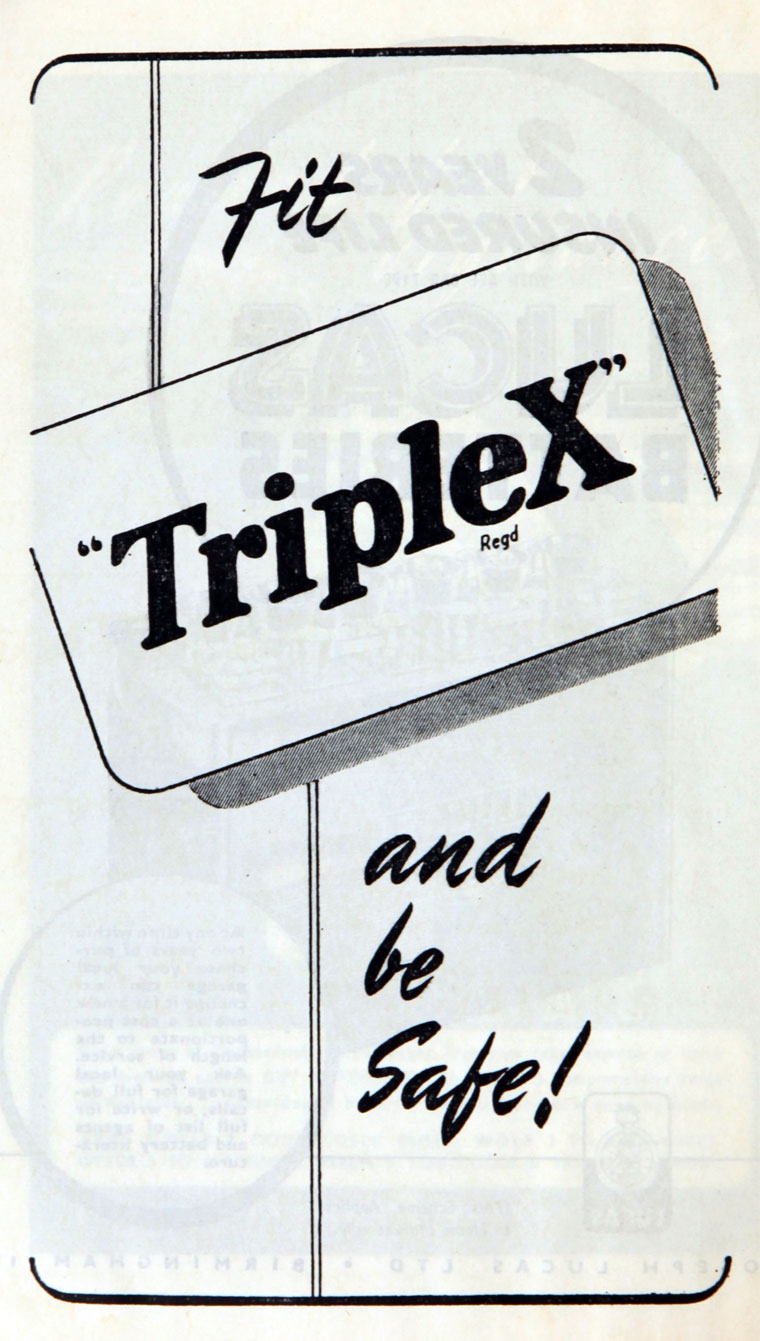 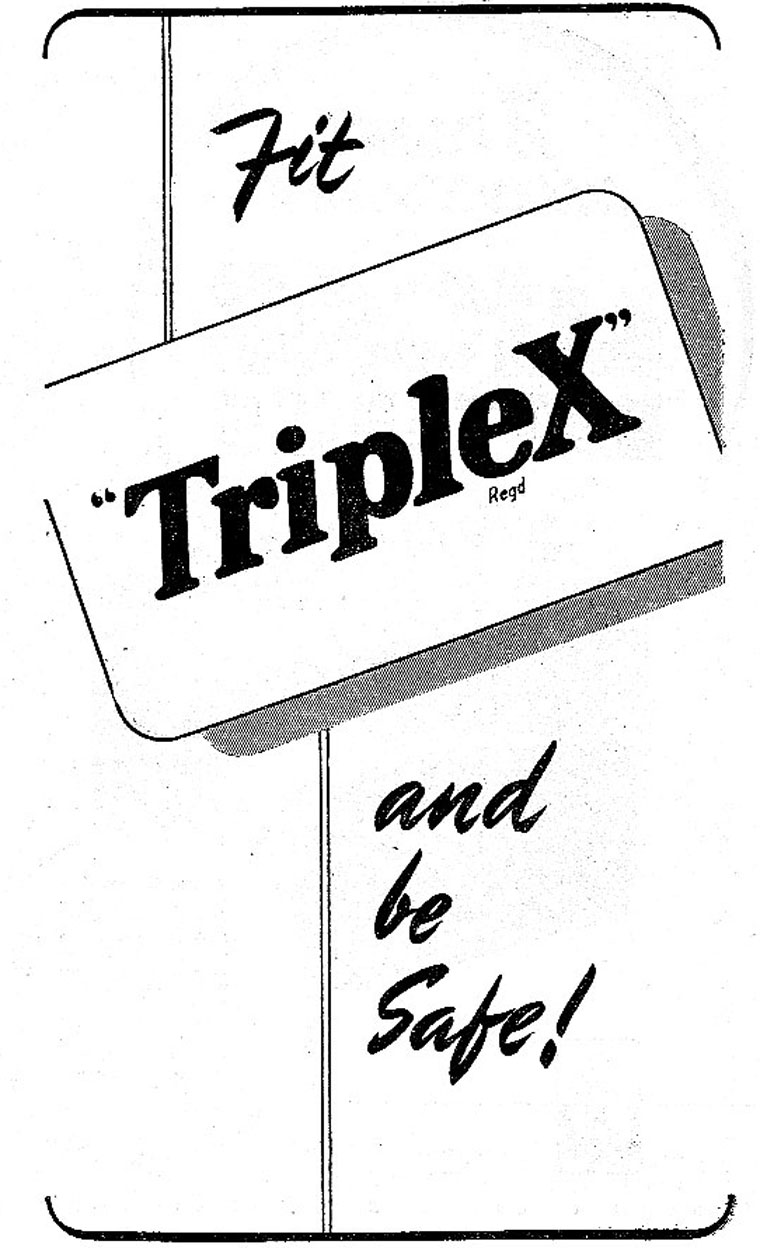 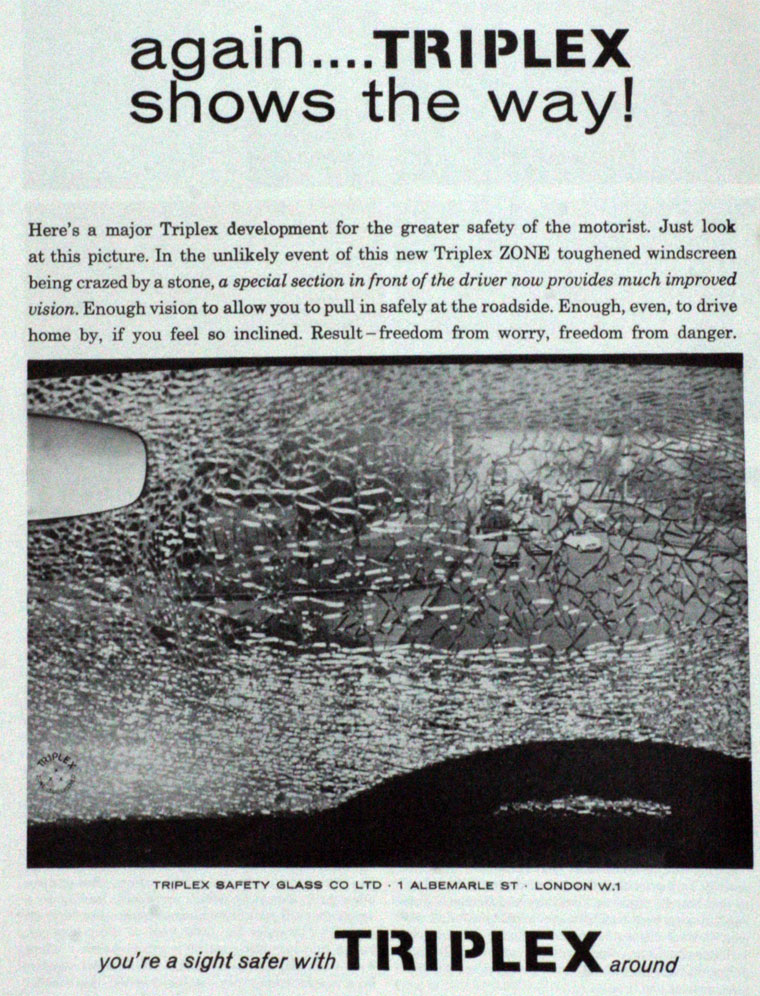 1912 Public company incorporated. The need for the specialist production of safety glass led to the formation of the Triplex Safety Glass Company to operate in Britain certain French patents for laminated glass. The manufacturing process involved fixing Xylonite or some other transparent material between 2 sheets of glass, thus triplex glass[1]

1920 British Glass Industries had large interest in the company[4]

1924 Third AGM of the company. Freehold factory at Willesden[5]

1927 Purchased a new factory at King's Norton, Birmingham with the support of a loan from Guest, Keen and Nettlefolds[6]

c.1927 Pilkington developed a process for making thin plate glass suitable for Triplex and became an important supplier to Triplex[7]

1929 Pilkington and the Triplex Safety Glass Co formed a joint company, called Triplex Imperial, to build a works at Eccleston, St. Helens, to produce laminated glass; the factory had Pilkington management with support from Triplex.

1929 The company had holdings in Triplex (Northern) Ltd, the Triplex Safety Glass Co, of North America, and Triplex (Continental) Ltd[8]

1930 Triplex glass was fitted as standard on Austin cars[9]

Early 1930s A process for large-scale toughening of glass was developed by St. Gobain in France; Pilkington obtained an exclusive licence for Britain. Pilkington and Triplex then entered into agreements for Triplex to manufacture toughened glass for sale only to the motor and aircraft industries. The Triplex companies paid a royalty of 10 per cent on sales until April 1936. Pilkington reserved the right to exploit toughened glass for other uses[10]

1933 Acquired the goodwill of Protectoglass of Slough[12]

1934 Acquired the rights to make a new type of glazing glass called Thermolux and the shares and goodwill of the Thermolux Glass Co[13]. Diversified by forming Quickfit and Quartz to make laboratory glassware[14].

1936 Triplex (Northern) acquired H. E. Ashdown, maker of moulded products[16] to offer safety glass in plastic frames. Reduced prices of safety glass to encourage car manufacturers to continue to fit their products in windows in the face of competition from others who fitted ordinary glass[17]. 18 Manufacturers agreed to fit TripleX in 100 percent of uses. Thermolux and Quickfit and Quartz were subsidiaries. Had reached agreement with ICI allowing the Triplex company rights to sell Perspex[18]

By the end of the 1930s the Triplex companies were producing about five times as much toughened glass as laminated glass[20].

1939 Acquired control of Lancegaye Safety Glass (1934) Ltd. and its subsidiary Gilt Edge Safety Glass Syndicate by purchasing more than 90 per cent of Lancegaye's share capital. After the failure of the experiment with plastic framing, H. E. Ashdown was sold to Pilkington.

WWII Manufactured parts for the De Havilland Mosquito and other aircraft, eyepieces for gas masks, etc. Made plastic components at Kings Norton and in one of the 2 factories at Willesden. The Eccleston factory was used for munitions.

1951 Purchased 2 engineering companies as a move to diversify the business - Stern and Bell Ltd of Birmingham, specialists in welded fabrication, forging, flame cutting and general engineering; and Weldall and Assembly Ltd of Stourbridge, makers of welded fabrications[22].

Curved glass was introduced as a result of inventions by St. Gobain and by Libbey Owens Ford. Triplex developed "zoned" windscreens, giving a zone of relatively clear vision in case of breakage, following similar developments on the Continent. Also developed heated rear windows for cars.

1958 James A. Jobling and Co acquired Quickfit and Quartz Ltd, makers of laboratory and industrial glassware, from Triplex[23]; Jobling had related interests in laboratory glassware and had been the sole supplier of raw materials to Quickfit [24]

1970 Aircraft activities were organised in a separate division; orders had been received for the Airbus and from the Japanese aircraft industry and production orders were expected for Concorde; the engineering companies had achieved highest ever turnover, including a major order for a conveyor for British Leyland; this helped to offset the poor results of the Safety Glass company[28]

1972 Pilkington acquired the remaining shares in the company[29]