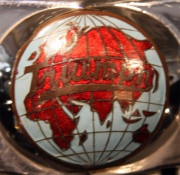 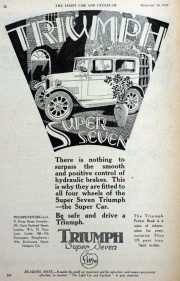 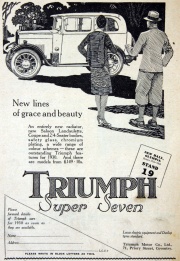 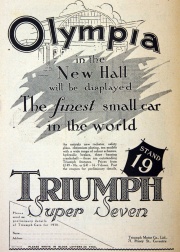 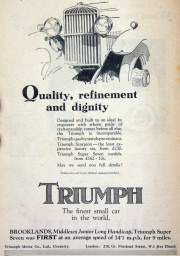 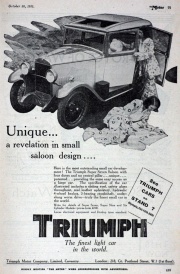 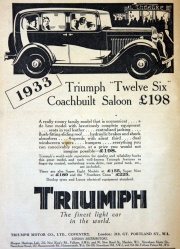 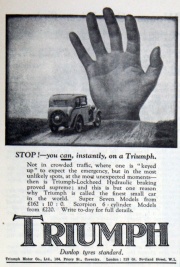 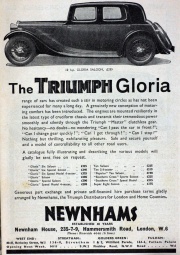 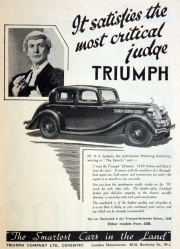 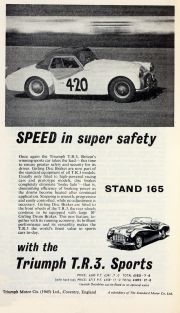 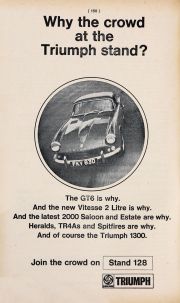 of Coventry. Part of the Triumph Cycle Co

Siegfried Bettmann was persuaded by his general manager Claude Holbrook, who had joined the company in 1919, to acquire the assets and Clay Lane premises of the Dawson Car Co and start producing a 1.4 litre model called the Triumph 10/20 which was actually designed for them by Lea-Francis to whom they paid a royalty for every car sold. Production of this car and its immediate successors was on a moderate scale but this changed with the introduction in 1927 of the Triumph Super 7 which sold in large numbers through to 1934.

1929 When the Great Depression hit in 1929, Triumph spun off its German subsidiary as a separate, independently owned company, which became part of the Triumph-Adler Company. The Nuremberg firm continued to manufacture motorcycles under the Triumph brand until 1957.

1930 It was clear to Holbrook that there was no future in pursuing the mass manufacturers and so decided to take the company upmarket with the Southern Cross and Gloria ranges. At first these used engines made by Triumph but designed by Coventry Climax but from 1937 they started to make them to their own designs by Donald Healey who had become the company’s Experimental Manager in 1934.

1936 The Triumph company hit financial problems and sold the Triumph motorcycle businesses to Jack Sangster to become the Triumph Engineering Co. Bicycle production was acquired by Coventry Bicycles [1]. According to some sources, Siegfried Bettmann was involved in this.

1939 In July the Triumph Motor Company went into receivership and the factory, equipment and goodwill were offered for sale. Thomas W. Ward purchased the Triumph Motor Co [2] and placed Healey in charge as general manager, but the effects of World War II again stopped the production of cars and the Priory Street works was completely destroyed by bombing in 1940.

1951 Listed as a subsidiary of Standard Motor Co.

1959 Standard had been making a range of small saloons called the Standard Eight and Standard Ten and had been working on a replacement for these. When this was launched in 1959, as the Herald, it carried the Standard-Triumph badge and slowly the Standard name was dropped disappearing in 1963.

December 1960 the company was bought by Leyland Motors with Donald Stokes becoming chairman of the Standard Triumph division in 1963.

1960s and 1970s: Triumph sold a succession of Michelotti-styled saloons and sports cars, including the advanced Dolomite Sprint, which, in 1973, already had a 16-valve four cylinder engine. It is alleged that many Triumphs of this era were unreliable, especially the 2.5 PI with its fuel injection problems. While the injection system had proved itself in international competition, it did lack altitude compensation for the adjustment of mixture at altitudes greater than 3000ft above sea level. The key reason for the Lucas system's unpopularity, was that Lucas was not inclined to further develop it on the one hand allied to the unwillingness of Standard-Triumph dealers to attend factory and field-based training courses dedicated to this propulsion method.

1978 Production of the TR7 was transferred from Speke, where the plant was under-used, to Canley in Coventry

For most of its time under Leyland or BL ownership the Triumph marque belonged in the Specialist Division of the company which went under the names of Rover Triumph and later Jaguar Rover Triumph apart from a brief period in the mid 1970s when all BL's car marques or brands were grouped together under the name of Leyland Cars.

1981 The last Triumph model was the Acclaim, which was launched in 1981 in a joint venture with Japanese company Honda. The Triumph name disappeared in 1984, when the Acclaim was replaced by the Rover 200, which was a re-badged version of Honda's Civic/Ballade model. The BL car division was by then called Austin Rover Group which also sounded the death knell for the Morris marque as well as Triumph.

The trademark is currently owned by BMW, acquired when it bought the Rover Group in 1994. When it sold Rover, it kept the Triumph marque. The Phoenix Consortium, which bought Rover, tried to buy the Triumph brand, but BMW refused, saying that if Phoenix insisted, it would break the deal. Standard and Triumph are now, along with Riley, Rolls-Royce and Mini, part of the BMW Group.