1894 Original Turbine of the SS Turbinia.

Original turbine on display at the London Science Museum 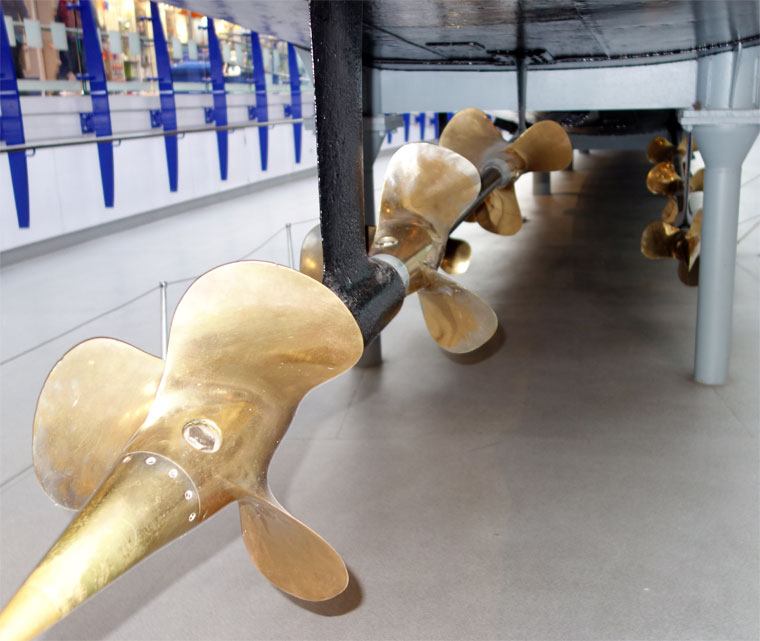 Turbinia was an experimental high speed steam turbine-driven vessel, designed by Charles Algernon Parsons and made by the Marine Steam Turbine Co.

Parsons undertook a great deal of investigative work to develop the high speed machinery, propellors, and, vitally, the shape of a hull to allow the anticipated speed to be obtained.

1894 Parsons applied for a patent for 'propelling a vessel by means of a steam turbine, which turbine actuates the propeller or paddle shaft directly or through gearing'.

1894 Parsons formed the Marine Steam Turbine Co to exploit the marine applications of his turbine and to construct the Turbinia, with works at Wallsend.

1894 Preliminary trials were made on November 14th, using a single propeller of 30" diameter. This suffered excessive slip, and a four bladed propeller was next tried, with no benefit. Various other types were tried, the best results coming from three propellers on the one shaft, but still the slip was too high and the vessel's speed unsatisfactory. The problem was diagnosed as cavitation, a term applied to a phenomenon first noticed by Sir John I. Thornycroft and S. W. Barnaby in 1893, during trials of a 27-knot 'Daring' class torpedo-boat destroyer.

Christopher John Leyland became deeply involved with Turbinia's development, acting as captain of her ten-man crew throughout her speed trials, when she eventually attained speeds of well over 30 knots, considerably outpacing any ship in the navy. At speed all that could be seen of the sleek, 100 foot long ship was her "bow emerging from a huge wave and a flame from the funnel flickering into the air".

1897 Turbinia was sailed at speed through the Diamond Jubilee fleet review of the Royal Navy in June 1897 off Portsmouth, demonstrating the great potential of the new technology. Eventually the Admiralty was persuaded of the virtues of steam turbines.

1900 Turbinia made two eventful trips to Paris for the 1900 Universal Exhibition under Leyland's command, and made a triumphant demonstration for the French navy.

1928 The aft-part and the turbine engine of the Turbinia were presented to the London Science Museum, there being insufficient space for the whole vessel. The original turbine (which had been replaced) was also part of the gift[1].

The fore and aft parts of the hull have been reunited, and are impressively displayed in a purpose-built gallery at the Discovery Museum, Newcastle, along with important models and artefacts used in the development of the vessel. The original (radial flow) turbine remains on display in the London Science Museum.