1850 Barn mill at the Museum of Lincolnshire Life 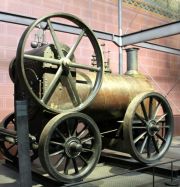 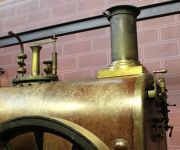 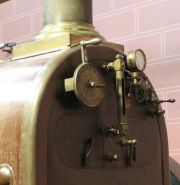 1838 His two sons Weston Tuxford and Wedd Tuxford (and William Tuxford?) joined him in the business

1841 Listed under Engineers as 'Tuxford and Sons, Market Place'.[2]

1851 Portable engine shown at the 1851 Great Exhibition. The engine is well-finished, and has a very neat appearance due to much of the mechanism being enclosed against dust and intereference. It is now on display at the Musee des Arts et Metiers in Paris. See photos.

1856 'Near Skirbeck church are Boston and Skirbeck Iron Works belonging to Messrs. Tuxford and Son, who employ several hundred hands in the manufacture of portable steam engines, thrashing machines, mill work, iron bridges, patent slips, pile-driving engines etc. These works extend over an area of five acres, and were founded many years ago, by the senior partner Mr. Wm Wedd Tuxford, who was the first manufacturer of the portable farm yard steam engines and combined thrashing, shaking and dressing machines, which are are now extensively made at here and Lincoln,'[4]

1862 May. At the Bath and West Society Show, Tuxford and Son showed a traction engine. [6]

1885 Works for sale. 'ALL those valuable & commodious engineering works, known as "Tuxford and Sons Boston and Skirbeck Ironworks," situate in close proximity to the new Boston Docks and the Boston Dock Railway (G.N.R) are, owing to the recent decease Mr. Weston Tuxford, the last surviving partner of the firm of Messrs. Tuxford and Sons, now for disposal. The Works, which have been established since 1830, and have commanded an extensive business, are as present arranged include convenient Accountancy, drawing and private Offices fronting to the Skirbeck-road; also the Iron Foundry, with three cupolas and large pit for pipe casting, drying stoves and 3 powerful cranes; also a conveniently-arranged Brass Foundry, with three furnaces and pattern shop, together with smiths' shop 300ft long and 36ft. wide, fitted up with modern smiths' forges and blasts and appliances; Boiler Shop with all necessary tools of good type for that department; Paint Shop and finished engine Stores, Gas Apparatus with two purifiers and holders, large casting Stores, Stables, Coach-house, &c.; also an excellent Flour Mill, with five pairs of stones, to work by wind or steam; the whole standing upon an area of about 4 1/2 Acres. The new Boston Dock and Boston Dock Railway (G.N.R.) are within a few yards distance, and is anticipated that no difficulty would be met with in connecting these works with both. It is believed that the sale of these Works offers an unusually fine opening for investment enterprise, besides space sufficient for engineering works, as now carried on, there would convenience for making a Slipway directly connected with the Boston Haven and Docks for the repairing of large vessels, and there also be convenience for other businesses requiring room and cheap water and railway carriage.'[11]