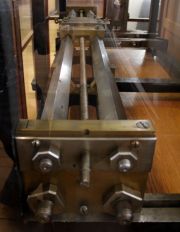 3. Viewing along the axis of the workpiece

4. The carriage and cross slide. Purpose of large-headed screws? 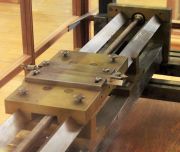 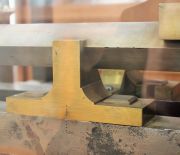 6. One of the brass pillars connecting the upper and lower bars/ Note the stamped match-marking on the components 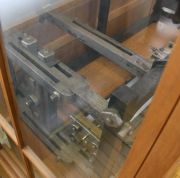 7. The bracket for the fixed centre. The extra slots on the outboard side would allow the frame to be moved slightly outwards. Why? The inboard bracket can be moved along the supporting frame, presumably to accommodate shorter workpieces between centres 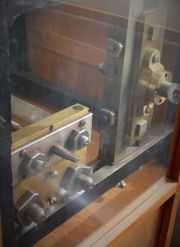 9. The adjustable centre, and the end of the carriage guide frame, with the hexagon end of the leadscrew which would accommodate the hand crank

The brass carriage holding the tool was traversed by a leadscrew, guided and supported by two polished wrought iron bars of square section. They are set at 45 degrees to the horizontal (as V-ways). These bars are in turn supported by two square polished wrought iron bars, the four bars being joined at the ends and at several positions along their length to markedly increase the rigidity of the guide bars. These four polished bars are in turn attached to a wrought iron space frame. Bolted to each end of this frame is a bracket holding a dead centre, between which the workpiece was supported. No drive mechanism is evident, so presumably a cord or belt was taken round the workpiece, or the workpiece may have been mounted on a mandrel together with a pulley.

The fine-pitch leadscrew which traversed the carriage was rotated by hand using a removable crank.

It is a very early example of a 'slide lathe' with the cutting tool constrained by guides to move in the 'X' and 'Y' planes, and able to traverse the whole length of the workpiece. It was also an early example of a precision all-metal machine tool made purely for heavy duty commercial use, as distinct from those precision machine tools made for the amusement of wealthy owners. This difference is underlined by the rational approach to the finish of the components: a high standard of finish was applied where it was needed, but no unnecessary effort has been expended on the parts of the frame which are not used for location purposes, these being left as-forged.

However, it was by no means a versatile machine, being solely constructed to turn calendar rolls up to about 30cm diameter and about 1 metre long. It was well-suited to machining just one standard length of workpiece. The adjustable centre would be partially unscrewed to install the workpiece, and then screwed in to support it with the right degree of contact pressure. This is not ideal, because it demands a very high standard of concentricity between the cone and the threaded portion of the adjustable centre, by no means easy to achieve in practice. If a shorter workpiece was to be accommodated, it appears that the bracket for the fixed centre could be relocated to the 'floating' bracket seen in photo 7. However, this would not be undertaken lightly, because of the work involved in realigning the adjustable centre. Furthermore, the wrought iron frame to which the 'floating' bracket is clamped does not have prepared surfaces to accommodate the bracket. Puzzling.

If a workpiece of smaller diameter was to be machined, the tool on its cross-slide could be extended out, but with appreciable loss of rigidity due to the increased overhang. Alternatively, the pair of centres could be repositioned closer to the slideways. An inconvenient arrangement.

Felix Rosat was responsible for the production of the lathe and of Vaucanson's Drilling Machine.[1]