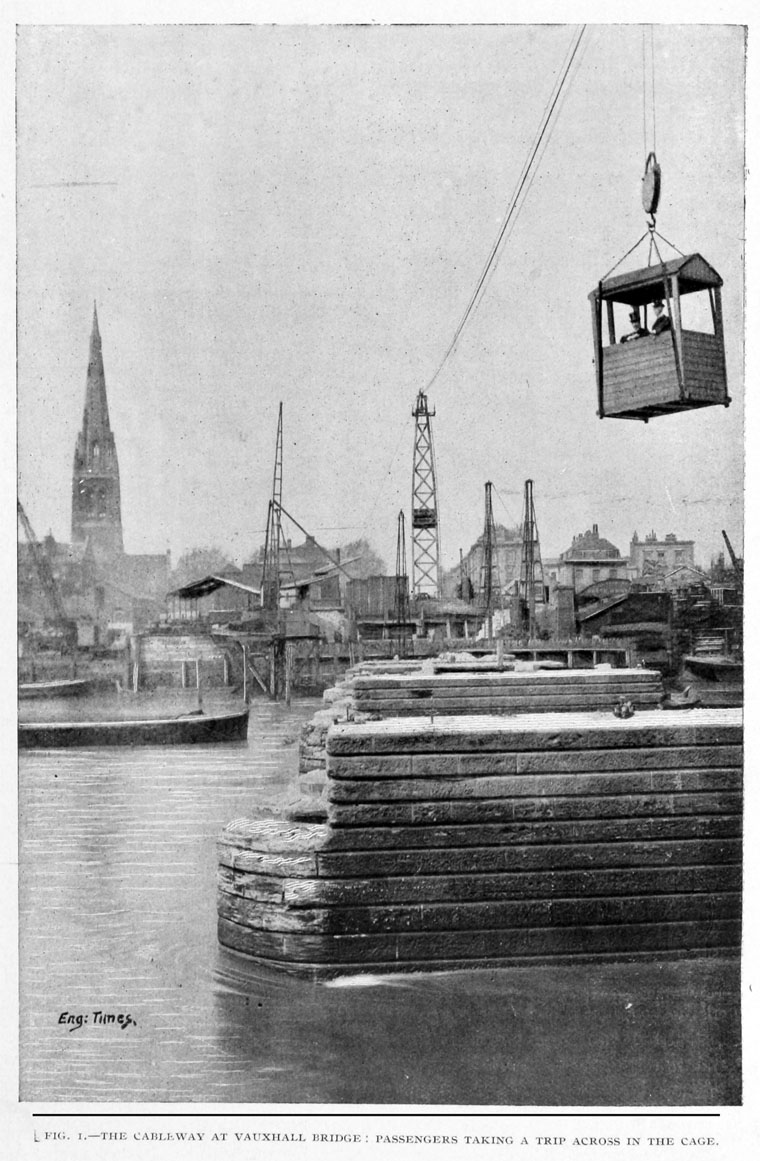 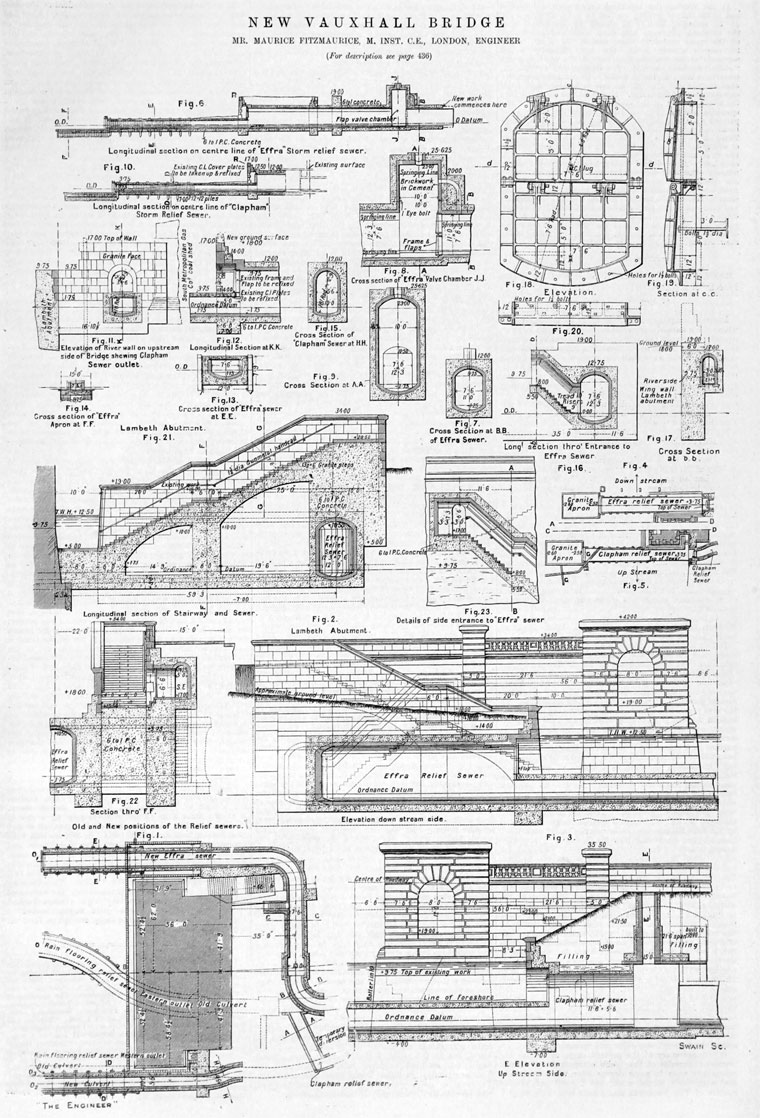 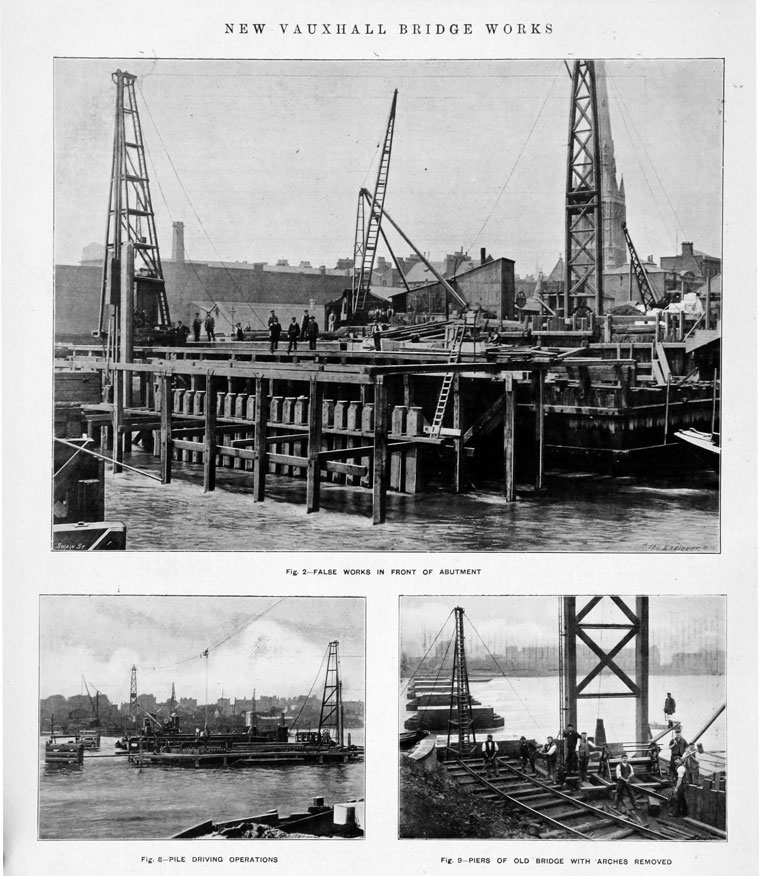 Vauxhall Bridge is a steel and granite deck arch bridge in central London.

The bridge crosses the River Thames in a south–east north–west direction between Vauxhall on the south bank and Pimlico on the north bank.

1810 'Wednesday the first pile of Vauxhall Bridge was driven into the bed of the Thames, and was saluted by a discharge of cannon from Cumberland Gardens. This new bridge is to be built just above the Vauxhall Ferry, and will pass over close the east side of Cumberland Gardens.'[1]

1811 'The Regent's Bridge.— Yesterday the ceremony of laying the foundation-stone of this new and useful structure took place, within the coffre-dam, on the Millbank-side of the river Thames, opposite to Cumberland gardens, Vauxhall. The interior of the semi-circular coffre-dam was fitted up with stages of seats in the manner of an amphitheatre, with gallery on the top of the dam. The platform in the centre is a large inclined plane of double timbers, placed on the piles which are to contain the nothern abutment, and is about 13 feet below low-water mark. At the centre of the platform was placed the foundation-stone, of Scotch granite, (with a sunk cavity on the top it, for the coins, &c.) between two Portland stones; the upper stone being elevated by machinery. At the east-end was hoisted the Union Flag, and at the west, the Regent's Standard.
—The weather was so exceedingly unfavourable, that though some hundreds were within the inclosure, it was not near full. It not being convenient to his Royal Highness to attend in person, he was pleased to depute Lord Dundas as his representative for the performance of the usual ceremonies. Lord arrived at a little before three o'clock, in the Admiralty barge, when he was received and conducted by the Chairman, the Deputy Chairman, and two of the Committee for directing the works. His Lordship's landing was announced a royal salute of guns. He descended into the coffre-dam a temporary stair case, and placed himself behind the foundation stone, facing the river, with several visitors on his right and the gentlemen concerned in the undertaking on his left. A little to the right of his Lordship stood a table covered with green cloth, on which was placed a large silver dish, containing a glass case, in which were inclosed specimens of the different British coins of the present year, and plate with the following inscription thereon :
On the 9th day of May, the year of our Lord and the 51st year of the reign his Majesty King George III. the First Stone of this Bridge was laid bv his Royal Highness, GEORGE, PRINCE OF WALES, Regent of the United Kingdom of Great Britain and Ireland, represented by the Rt. Hon. Thomas, Lord Dundas, assisted by Jos. Shee, Chairman, Henry Buckley, Deputy Chairman, William Robert Henry Brown, Thomas Poplewell, John Burnall, Michael Prendergrast, William Chalklin, Thomas Rolle, Samuel Davis, William Smith, William Hilfan, George Watts, George Leyburn, John Warmington, Abraham Walker, Being the Committee of Proprietors of the Vauxhall Bridge Company. JOHN RENNIE, Engineer.
On the same table were also the wooden mallet, a bottle of port wine, and the trowel which his Lordship was to use. Every thing being arranged for the commencement the business, Mr. Rennie, the Engineer, poured some mortar into the cavity of the foundation-stone, and handed the silver trowel and the glass case, with its contents, to Lord Dundas, which his Lordship bedded the cavity, and then spread in tiie mortar in the usual mode. The top bed of the stone was also covered with mortar, spread in the same manner, and the upper stone was then lowered and fixed upon it. ......
—This bridge will be built, externally, of a most durable Scotch granite: the ornaments and finishings of Portland stone. It will be straight bridge, like those of antiquity, and will consist of seven arches; the central one of 110 feet span, the others diminishing in size to 90 feet at the ends. The water-way will be 702 feet, and the whole extent, 920 feet. It will take about five years in completion.'[2]

1811 'No further progress, it seems, can be made in the new intended Vauxhall Bridge until after the meeting of Parliament; when the Commissioners, it is said, mean to petition for legislative authority to build it with cast iron instead of stone.'[3]

1812 'It is determined to proceed with the erection of the Vauxhall Bridge, but to make it of iron instead of stone, which may done at an expence of about 90,000l. A meeting was held on Thursday last, when the body of subscribers came to this resolution.'[4]

1813 'The first stone for the abutment, on the Surrey side Vauxhall Bridge, was laid last week by Prince Charles, eldest son of the Duke of Brunswick.'[5]

1814 'Bow-street. — For some time past robberies to a great extent, have been committed on the property of Messrs.Joliffe and Banks, the contractors for Vauxhall Bridge, and in consequence of information they received that a great number of deals had been put down a cellar belonging to one Davis, a chimney-sweeper, in Strand-lane, for several mornings between the hours of one and four, application was made to Bow-street, and a warrant granted to search Davis’s cellar. George Ruthven, a constable, found 21 deals concealed behind a large soot-cloth',....'[6]

1817 'Butterley Co. .... To these we owe many works of great public utility, which adorn various parts of the country; and among them may be mentioned Vauxhall Bridge, or at least the principal or iron part of it.'[7]

Opened in 1906, it replaced the earlier bridge, originally known as Regent's Bridge but later renamed Vauxhall Bridge, built between 1809 and 1816 as part of a scheme for redeveloping the south bank of the Thames. The original bridge was itself built on the site of a former ferry.

The London County Council's resident engineer, Sir Alexander Binnie, submitted a design for a steel bridge, which proved unpopular. At the request of the LCC, Binnie submitted a new design for a bridge of five spans, to be built in concrete and faced with granite.

Work on Binnie's design began, but was beset by problems. Leading architects condemned the design.

Plans to build large stone abutments had to be suspended when it was found that the southern abutment would block the River Effra, which by this time had been diverted underground to serve as a storm relief sewer and which flowed into the Thames at this point. The Effra had to be rerouted to join the Thames to the north of the bridge.

After the construction of the foundations and piers it was then discovered that the clay of the riverbed at this point would not be able to support the weight of a concrete bridge. With the granite piers already in place, it was decided to build a steel superstructure onto the existing piers, and a superstructure 809 feet long and 80 feet wide was designed by Binnie and Maurice Fitzmaurice and built by LCC engineers at a cost of £437,000.

The new bridge was eventually opened on 26 May 1906, five years behind schedule, in a ceremony presided over by the Prince of Wales and Evan Spicer, Chairman of the LCC. Charles Wall, who had won the contract to build the superstructure of the new bridge, paid the LCC £50 for the temporary wooden bridge, comprising 40,000 cubic feet of timber and 580 tons of scrap metal.