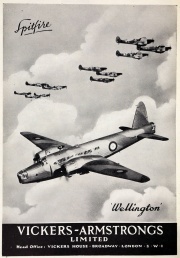 Note: This is a sub-section of Vickers-Armstrongs

The Vickers Wellington was a British twin-engine, long range medium bomber designed in the mid-1930s at Brooklands in Weybridge, Surrey, by Vickers-Armstrongs' Chief Designer, R. K. Pierson in response to specification B.9/32. Issued in the middle of 1932 this called for a twin-engined day bomber of perceptibly higher performance than any previous designs. It was widely used as a night bomber in the early years of the Second World War, before being displaced as a bomber by the larger four-engine "heavies" such as the Avro Lancaster. The Wellington continued to serve throughout the war in other duties, particularly as an anti-submarine aircraft. It was the only British bomber to be produced for the entire duration of the war, and was still first-line equipment when the war ended. The Wellington was one of two bombers named after Arthur Wellesley, 1st Duke of Wellington, the other being the Vickers Wellesley.

The Wellington used a geodesic construction method, which had been devised by Barnes Wallis inspired by his work on airships, and had previously been used to build the single-engine Wellesley light bomber. The fuselage was built up from 1,650 elements, consisting of aluminium alloy (duralumin) W-beams that were formed into a large framework. Wooden battens were screwed onto the aluminium, and these were covered with Irish linen, which, once treated with many layers of dope, formed the outer skin of the aircraft. The metal lattice gave the structure tremendous strength, because any one of the stringers could support some of the weight from even the opposite side of the aircraft. Blowing out one side's beams would still leave the aircraft as a whole intact; as a result, Wellingtons with huge areas of framework missing continued to return home when other types would not have survived; the dramatic effect was enhanced by the doped fabric skin burning off, leaving the naked frames exposed.

In one case, a German Bf 110 night-fighter attacked a Wellington returning from an attack on Münster, Germany, causing a fire at the rear of the starboard engine. Co-pilot Sergeant James Allen Ward climbed out of the fuselage in flight, kicked holes in the doped fabric of the wing for foot and hand holds to reach the starboard engine, and physically smothered the burning upper wing covering. He and the aircraft returned home safely, and Ward was awarded the Victoria Cross for his actions.

The geodesic structure also gave a very strong but light structure for its large size, which gave the Wellington a load and range to power ratio advantage over similar aircraft, without sacrificing robustness or protective devices such as armour plate or self-sealing fuel tanks.

The construction system also had a distinct disadvantage in that it took considerably longer to build a Wellington than other designs using monocoque construction techniques. Also, it was difficult to cut holes into the fuselage to provide additional access or equipment fixtures.

The Leigh light, for instance, was deployed through the mounting for the absent FN9 ventral turret. Nevertheless, in the late 1930s Vickers succeeded in building Wellingtons at a rate of one a day at Weybridge and 50 a month at the Chester factory (located at Broughton in North Wales). Peak wartime production in 1942 saw monthly rates of 70 achieved at Weybridge, 130 at Broughton and 102 at Blackpool.

The Wellington went through a total of 16 variants during its production life plus a further two training conversions after the war. The prototype serial K4049 designed to satisfy Ministry Specification B.9/32, first flew as a Type 271 (and initially named Crecy) from Brooklands on 15 June 1936 with chief test pilot Joseph Summers as pilot. After many changes to the design, it was accepted on 15 August 1936 for production with the name Wellington.

The first model was the Wellington Mark I, powered by a pair of 1,050 hp (780 kW) Bristol Pegasus engines, of which 180 were built, 150 for the Royal Air Force and 30 for the Royal New Zealand Air Force (which were transferred to the RAF on the outbreak of war and used by 75 Squadron). The Mark I first entered service with No. 9 Squadron RAF in October 1938. Improvements to the turrets resulted in 183 Mark IA Wellingtons, which equipped the RAF Bomber Command heavy bomber squadrons at the outbreak of war. The Wellington was initially outnumbered by its twin-engine contemporaries, the Handley Page Hampden and the Armstrong Whitworth Whitley, but ultimately outlasted them in productive service. The number of Wellingtons built totalled 11,461 of all versions, the last of which was rolled out on 13 October 1945.

As a propaganda and morale boosting exercise, in October 1943 workers at the Vickers Broughton factory gave up their weekend to build Wellington number LN514 against the clock. The bomber was assembled in new world record time of 23 hours 50 minutes, and took off after 24 hours 48 minutes, beating the previous record of 48 hours set by an American factory in California. The bomber was usually built within 60 hours. The effort was filmed for the Ministry of Information, forming the basis of a newsreel Worker's Week-End, broadcast in Britain and America.

The first RAF bombing attack of the war was made by Wellingtons of No. 9 and No. 149 Squadrons, along with Bristol Blenheims, on German shipping at Brunsbüttel on 4 September 1939. During this raid, the two Wellingtons became the first aircraft shot down on the Western Front. Numbers 9, 37 and 149 Squadrons saw action on 18 December 1939 on a mission against German shipping on the Schillig Roads and Wilhelmshaven. Luftwaffe fighters destroyed 12 of the bombers and badly damaged three others; thus highlighting the aircraft's vulnerability to attacking fighters, having neither self-sealing fuel tanks nor sufficient defensive armament. In particular, while the aircraft's nose and tail turrets protected against attacks from the front and rear, the Wellington had no defences against attacks from the beam and above, as it had not been believed that such attacks were possible owing to the high speed of aircraft involved.[5] As a consequence, Wellingtons were switched to night operations and participated in the first night raid on Berlin on 25 August 1940. In the first 1,000-aircraft raid on Cologne, on 30 May 1942, 599 out of 1,046 aircraft were Wellingtons (101 of them were flown by Polish aircrew).

Coastal Command Wellingtons carried out anti-submarine duties and sank their first enemy vessel on 6 July 1942. DWI versions (see below) fitted with a 48 ft diameter metal hoop were used for exploding enemy mines by generating a powerful magnetic field as it passed over them. In 1944, Wellingtons of Coastal Command were deployed to Greece, and performed various support duties during the RAF involvement in the Greek Civil War. A few Wellingtons were operated by the Hellenic Air Force.

While the Wellington was superseded in the European Theatre, it remained in operational service for much of the war in the Middle East, and in 1942, Wellingtons based in India became the RAF's first long-range bomber operating in the Far East. It was particularly effective with the South African Air Force in North Africa. This versatile aircraft also served in anti-submarine duties with 26 Squadron SAAF based in Takoradi, Gold Coast (now known as Ghana).

In late 1944, a radar-equipped Wellington was modified for use by the RAF's Fighter Interception Unit as what would now be described as an Airborne Early Warning and Control aircraft. It operated at an altitude of some 4,000 ft (1,219 m) over the North Sea to control de Havilland Mosquito fighters intercepting Heinkel He 111 bombers flying from Dutch airbases and carrying out airborne launches of the V-1 flying bomb.

The Wellington is listed in the appendix to the novel KG 200 as one flown by the German secret operations unit KG 200, which also tested, evaluated and sometimes clandestinely operated captured enemy aircraft during the Second World War

There were 11,461 of all versions produced