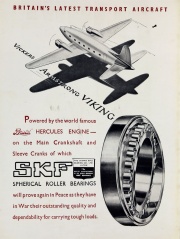 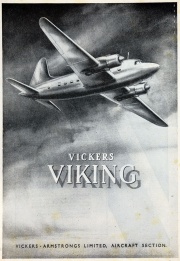 Note: This is a sub-section of Vickers Aircraft

The Vickers VC.1 Viking was a British twin-engine short-range airliner derived from the Vickers Wellington bomber and built by Vickers-Armstrongs Limited at Brooklands near Weybridge in Surrey. In the aftermath of the Second World War, the Viking was an important airliner with British airlines pending the development of turboprop aircraft like the Viscount. An experimental airframe was fitted with Rolls-Royce Nene turbojets and first flown in 1948 as the world's first pure jet transport aircraft.[1]

Pierson had already conceived a metamorphosed Wellington to become the ‘interim’ Viking with which to establish the newly formed British European Airways (BEA).

The Viking began commercial service with BEA on 1 September 1946 and was also adopted by the reconstituted royal flight.

An experimental Viking, powered by Rolls-Royce Nene engines, was the world's first airliner to be powered exclusively by jet propulsion.

A total of 163 Vikings were built, with some continuing in service until the early 1970s.

The military Valetta was derived from the Viking, and became the RAF's first truly multi-role transport aircraft, of which 263 were built. The Varsity multi-engine trainer was derived from this, with 163 being built, the type remaining in service for twenty-five years.

One Viking 1B aircraft modified for trials with two 5,000 lbf (22.3 kN) Rolls-Royce Nene I turbojets.

British military designation of the Viking 1; VIP transport aircraft for the King's Flight of the RAF.