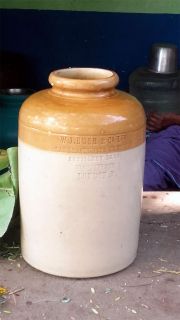 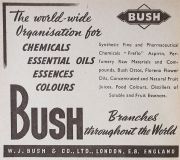 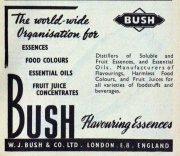 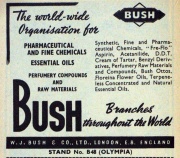 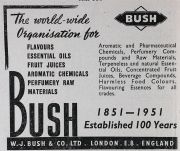 1850/51 The business was founded by William John Bush. Bush acquired a small factory in London and undertook the steam distillation of herbs, spices, and woods and the preparation of tinctures and essences. W. J. Bush and Co is credited with being England's first maker of flavourings and essences.

By 1880 the business had moved to Ash Grove (having moved from Artillery Lane, Bishopsgate), where W. J. Bush's Grove chemical works were located.

1890 The first overseas factory was established in Sicily.

1897 The company was registered on 17 March, to take over the business of manufacturing chemists of the firm of the same name. [2] 'The Company has been formed to acquire the old-established business of Messrs. W. J. BUSH and CO. The business is that of Manufacturing Chemists, and as Distillers of Essential Oils, Manufacturers and Distillers Fruit and Soluble Essences, Perfumers, Harmless Vegetable Colour Manufacturers, Brewers Chemists, Distillers' Chemists, Analytical and Consulting Chemists, Drug Merchants, &c., &c.. and carried on at the following Freehold Premises, viz.:— The Freehold Warehouses and Offices situate in Artillery-lane, in the City of London ; the Freehold Works at Ash-grove, Hackney; the Freehold Distillery at Mitcham, Surrey; and the Freehold Works at Messina, in Sicily. Since its foundation in 1851, by the late William John Bush, the business grew continuously under his direction, and since the death of its founder in 1889 has been further largely developed and increased under the active management his sons, the present vendors.' Directors: Baron de Bush, Sir George Hayter Chubb, Robert Wigram, James Mortimer Bush and Alfred Walter Bush.[3]

Over the years, W. J. Bush produced flavourings for foods, essential oils and perfume. Thanks to their worldwide presence, largely in countries that were once part of the British Empire, W. J. Bush and Co also acted as distributor or agent for other manufacturers in various countries.

WWI A factory making organic chemicals was erected at Widnes.