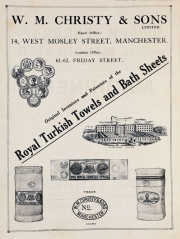 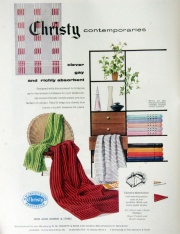 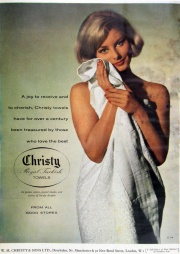 W. M. Christy and Sons of Droylsden, near Manchester

1829 William Miller Christy acquired capital as a result of the sale of his bank and and used the money to enter the textile industry.[1]

1843 William took two of his sons, Alexander and Richard, into partnership and retired from the day-to-day running of the business.

c1850 Henry Christy returned from Turkey with a sample of loop-pile towelling fabric. Richard Christy, his brother, recognized its potential commercial value. Samuel Holt, an employee working at the Hillgate Mill, developed a method of manufacturing the towels by machine and so production commenced, creating the "Turkish Towel".

1858 Charles Egerton Ashworth became a partner in the business.

1863 Fairfield Mill and the Manchester Office were connected by telegraph.

1874 The firm became a Limited Company.

The firm continued to be successful, although it did suffer from problems which were common throughout the industry such as shortages in the supply of raw cotton.

The firm's management were sensitive to the changing shape of the industry, recognising the need to advertise their product as competition increased and to modernise machinery and buildings.

Early 20th century: Reginald Hadfield, son of the Company's Secretary, Jonathan Hadfield, initiated a major programme of modernisation in the first decade of the 20th century.

1913 Richard Jones, Manager of the Manchester Office, was given a seat on the Board.

1916 Reginald Hadfield was given a seat on the Board.

1924 The Manchester Office was moved to 51 Mosley Street.

1941 Fairfield Mill closed on the order of the Cotton Controller due to demand for munition workers.

1941 Acquired Greenhow & Co. Ltd (a firm of Manchester merchants) as a capital investment.

1942 Mill reopened due to national shortage of towels.

Post-WWII: the Directors decided to undertake another sweeping programme of modernisation

1955 The decline in Lancashire's cotton industry led to the firm being taken over by Fine Spinners and Doublers Ltd.

1964 The whole group became part of the Courtaulds group of companies.