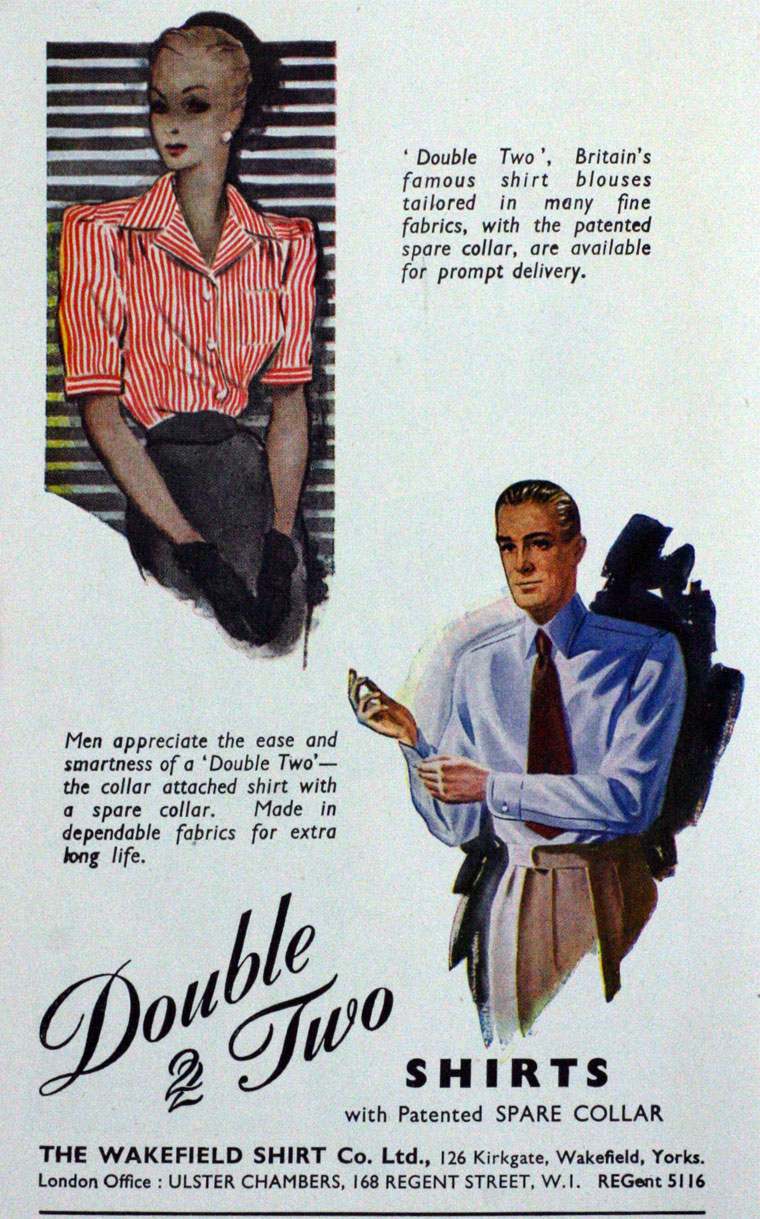 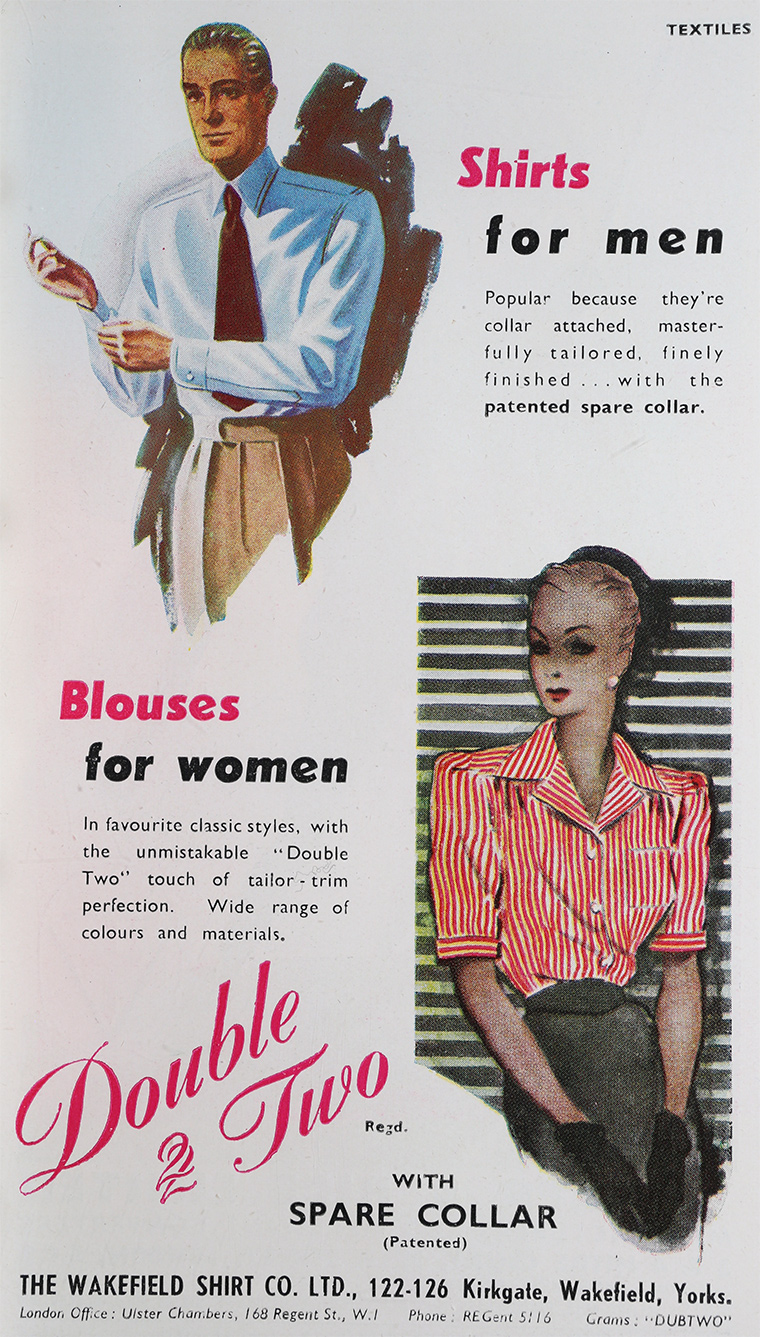 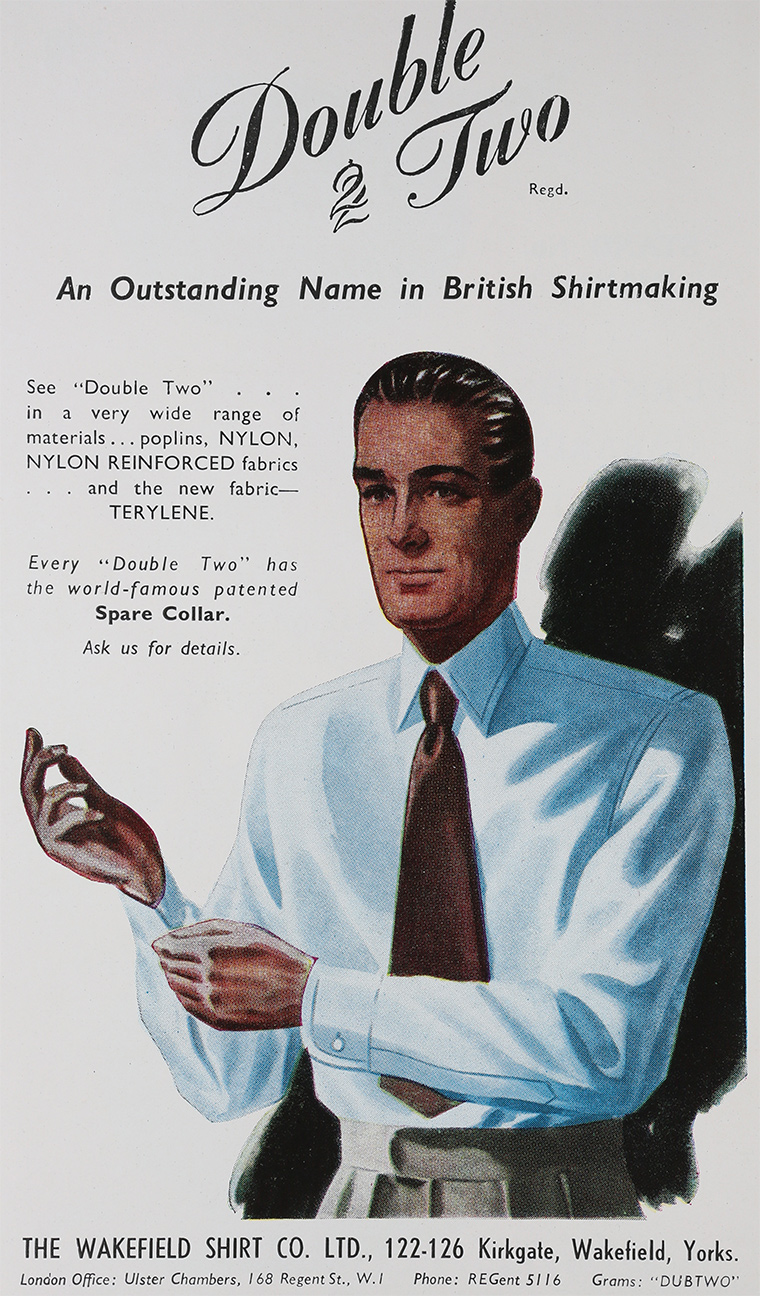 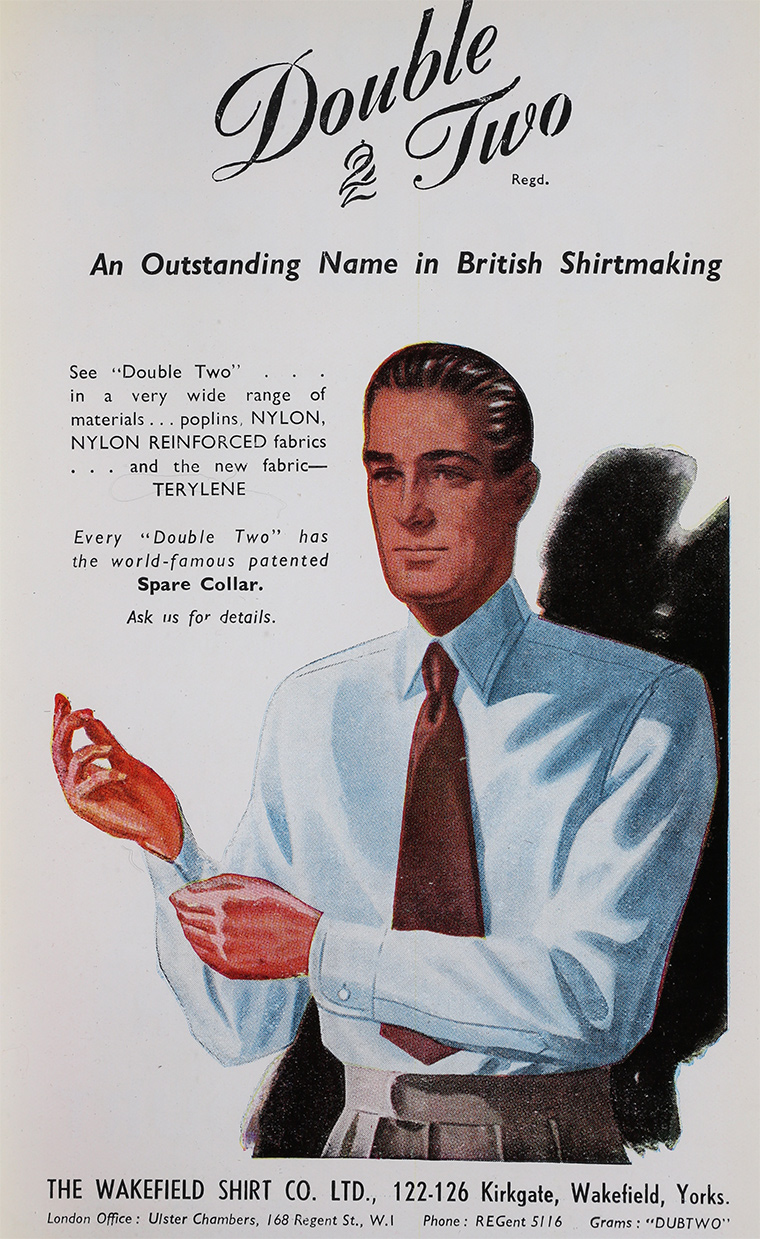 1940 The company was founded by Isaak Donner and Frank Myers, to make and sell men's shirts.

WWII. Throughout the war years there was a severe shortage of cotton and only viscose rayon material was available. The company's founders considered this fabric too delicate for men's shirts, but suitable for ladies' shirt/blouses. They reasoned that while the men were away fighting in the war, the women of Britain would be doing the men's jobs in factories and on farms and would require a more masculine style of shirt/blouse. Therefore this is what they produced and sold during those years.

A small room for a factory was found on the fourth floor of a building in Kirkgate, Wakefield, and over a period of a very few years the partners gradually bought up the whole of the building and developed it into a large shirt-blouse factory.

1946 When the war was over and the men returned to working in Britain's factories and farms, a big market developed in men's shirts which was the original speciality of Donner and Myers. They switched the bulk of production to collar-attached shirts but soon found that these were unpopular because British men had been used to wearing loose-collar shirts with stiff collars, so that the whole shirt did not need replacing when the collars wore out.

They decided to utilise a patent, which Donner's family had developed prior to the war, for making and attaching a soft but smart collar to shirts in such a way it could be easily removed.

The new product was an instant success and production flourished due to a strong national advertising campaign. Because the shirt had two collars and indeed at one time two pairs of cuffs, it was called Double Two.

1950s In the early '50s, the partners were approached by Dr. Rex Winfield who was then working for ICI and had, during the war, invented polyester fibre under the brand name of Terylene. Together they developed a warp knitted construction for this new man-made fibre and launched the first ever man-made fibre shirt. This shirt had the advantage of never needing to be ironed and dried very quickly when washed. It was also very strong and durable.

1952 With the two products both selling well and ladies' shirts once more back in the range, Double Two needed to expand its production, so the company acquired a large textile mill on an eight acre site to the south of Wakefield.

Over the next five years production was moved from the centre of Wakefield to the new site and built a modern single-storey factory and warehouse around the old mill. Up till then clothing factories had always been in multi-storey buildings with cutting on the top floor and cut parts and part-made garments flowing down to the warehouse on the ground floor, through a series of chutes, to each manufacturing level.

The new, big, open area, single-floor factory enabled the company to bring consultants from America to install the latest production system, the most modern machinery and piecework systems which enabled the workers to earn more than double their previous earnings by producing more garments. A quality control system was also installed to ensure that more rapid production did not mean lower quality. By then the company was employing over 500 people and making 800,000 shirts per annum.

In the late 1950s, Double Two introduced the first blends of natural and man-made fibres, adding strength, shrinkage resistance and pilling resistance to their cotton/wool blend Frend. In those days there was little central heating and warm shirts were a very large part of the market.

1965 Double Two launched a new all-cotton shirt with a percentage of polyester blended into the fabric for the collars and cuffs, to give them extra strength. The fabric was treated with a special resin to give it superb non-iron properties. A special national television advertising campaign was prepared for White Light and in six months the product became brand leader. Double Two also developed whole shirts made of a blend of polyester and cotton, the extra hard wearing properties enabled the company to dispense with the spare collar.

1968 Sales increased dramatically and Double Two acquired William Sugden and Sons, a large, local garment manufacturer with a shirt factory in Barnsley, which enabled Double Two to increase production yet again. Sugdens also made and sold workwear and jeans and this took Double Two into two new product fields. The Polyester/cotton fabric so successful in shirts, was developed into the workwear range and proved an instant success. The jeans were made of blue denim. The workwear side of the business also expanded successfully and another company, L. J.and M. Refson, in Sunderland, was added to the group to bring in ladies' workwear to sell with the Sugdens men's workwear.

Other smaller companies were added to the group over time and production and sales increased, so that by the end of the 1980s, the group employed over 1,000 people in 6 factories, selling over 3,000,000 garments a year in over 40 countries of the world.

In more recent years, increased costs in the UK forced the group to gradually move a large part of its production offshore. It now manufactures throughout the Far East, the Indian subcontinent, the Middle East, North Africa and Eastern Europe, as well as in Yorkshire.