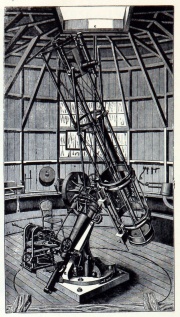 1868. Apparatus for photographing the Moon.

He was educated in Paris, and succeeded his father as head of the firm of Thomas de la Rue and Co.

By 1837 both Thomas de la Rue's sons were working in the business.

He patented a number of inventions, among them being processes for utilising earth oils, and machinery for simplifying the making of writing materials. The principal scientific work in which he distinguished himself was the application of photography to the recording of celestial phenomena. The photographs, when measured by a micrometer which he invented, furnished exact astronomical data.

1860 He went to Spain with the Himalaya Expedition, and was successful in obtaining a series of photographs of the total eclipse of the sun on July 18th.

President of The British Association.

1870 Warren retired from the family firm. On 24 August William Frederick de la Rue (Thomas' younger son) died, aged forty-six. Warren came back to run the firm with the help of his two sons, Warren William (1847–1921) and Sir Thomas Andros de la Rue, first baronet (1849–1911), both of whom had joined the firm on finishing their education.

1874 He fitted up a private physical laboratory, where, employing a battery of 15,000 chloride of silver cells, he has, in conjunction with his friend, Dr. Hugo Muller, carried on an elaborate series of researches on the electrical discharge.

He acted as honorary secretary of the Royal Astronomical Society, and was also president from 1864 to 1866.

He was for many years president of the London Institution, from which he retired and became secretary of the Royal Institution in 1878, on the retirement of Mr. Spottiswoode.

1882 He was a member of the Consulting Council of the Electrical Exhibition held at the Crystal Palace, Sydenham, and was a juror on numerous occasions for the Paris Exhibitions in the 1850s.

He was a corresponding member of the French Academie des Sciences, for the department of astronomy; also of the Imperial Acadamy of Sciences, St. Petersburg, and many others, and was the recipient of three foreign orders.