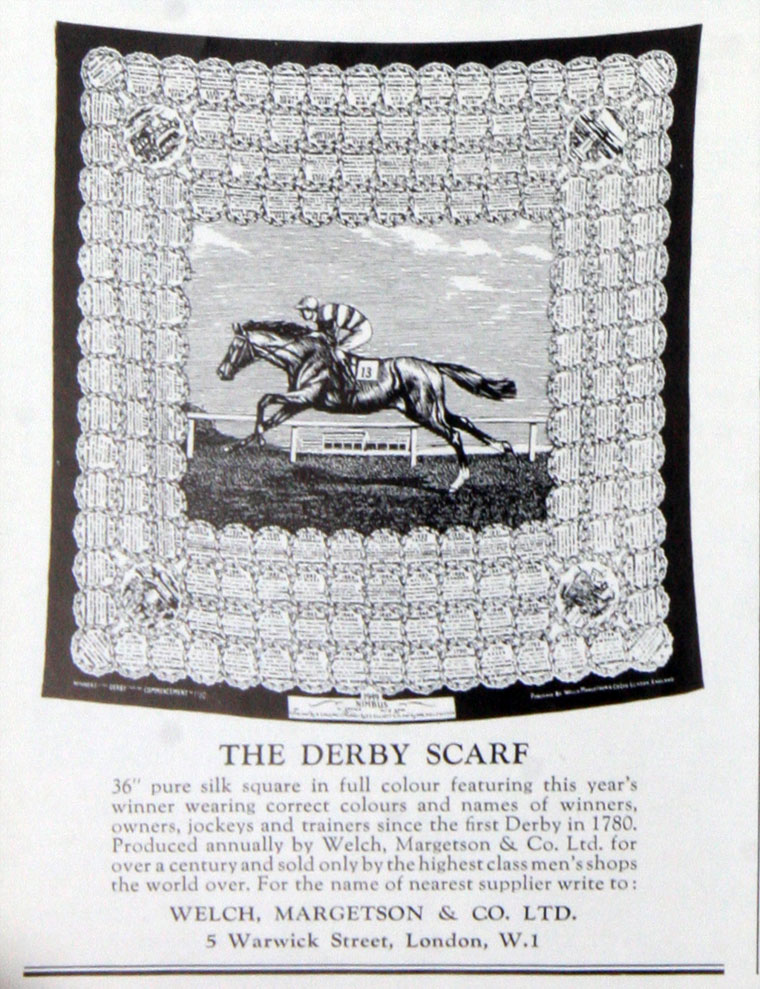 1851 Partnership change. '...the Partnership subsisting between us the undersigned, Joseph James Welch, John Stewart Margetson, Gilbert Elliott Mitchell, Edward Price, and Thomas Welch, of Cheapside, in the city of London, and elsewhere, Stock and Brace Manufacturers, Bandanna Printers, &c. carrying on business under the style or firm of Welch, Margetson, and Company, is dissolved by mutual consent, as and from the 21st day of December 1850, so far as regards the said Gilbert Elliott Mitchell. All debts due to and from the concern will be received and paid by the said Joseph James Welch, John Stewart Margetson, Edward Price, and Thomas Welch, who will continue the business...'[1]

1862 Patent. '2455, And John Stewart Margetson, of the firm of Welch, Margetson, and Company, of Cheapside, in the city of London, has given the like notice in respect of the invention of "improvements in the manufacture of the material intended for scarfs or cravats, and in the machinery employed therein."'[2]

1871 Partnership change. '...the Partnership heretofore subsisting between us the undersigned, Joseph James Welch, Edward Price, William Thomas Welch, Joseph Welch, John Margetson, and James Jeffery Morrish, as carried on at Nos. 15, 16, and 17, Cheapside, in the city of London, under the style or firm of Welch, Margetson, and Co., and at the Southwark Bridge-road, in the county of Surrey, under the style of Margetson, Welch, and Co., has been dissolved so far as relates to the undersigned Edward Price only...'[3]

1911 Partnership dissolved. '...the Partnership heretofore subsisting between us the undersigned, Joseph Welch, John Margetson, James Jeffery Morrish, Edward Allen Price, William Howard Welch, Harold Margetson, Reginald James Morrish, Donald Hubbard Welch, Edward Thirkell Price, Joseph Hubbard Welch, and Guy Percival Morrish, carrying on business as Wholesale Shirt, Stock, Brace and Collar Manufacturers, at 16 to 30, Moor-lane, in the city of London, and at Londonderry, in Ireland, under the style or firm of "WELCH, MARGETSON AND CO.," and at 237, Long-lane, Bermondsey, in the county of London, under the style or firm of "MARGETSON, WELCH AND CO.," will be dissolved as and from the 1st day of February. 1911 by mutual consent [4]

1914 Established in 1832 by Joseph James Welch and John Stewart Margetson, whose descendants now carry on the business in conjunction with the Messrs. Morrish and Price. Premises: The firm had their headquarters in Cheapside for over forty years, and were one of the last of the wholesale houses in the outfitting trade to leave that locality. Present premises in Moor Lane are very extensive. Branches: Edinburgh, Glasgow, Manchester, Bristol, Liverpool, Newcastle, Cardiff, Dublin, Plymouth, Melbourne, Sydney, Canada, New York, South Africa. Factories in Bermondsey, London, S,E., and at Londonderry. Specialities: Shirts, Collars, Ties, Braces, Flannels, Umbrellas, Handkerchiefs, Rugs, Dressing Gowns, &c. Are large manufacturers of, or dealers in, all these goods, and have introduced numerous inventions and improvements in same.[5]