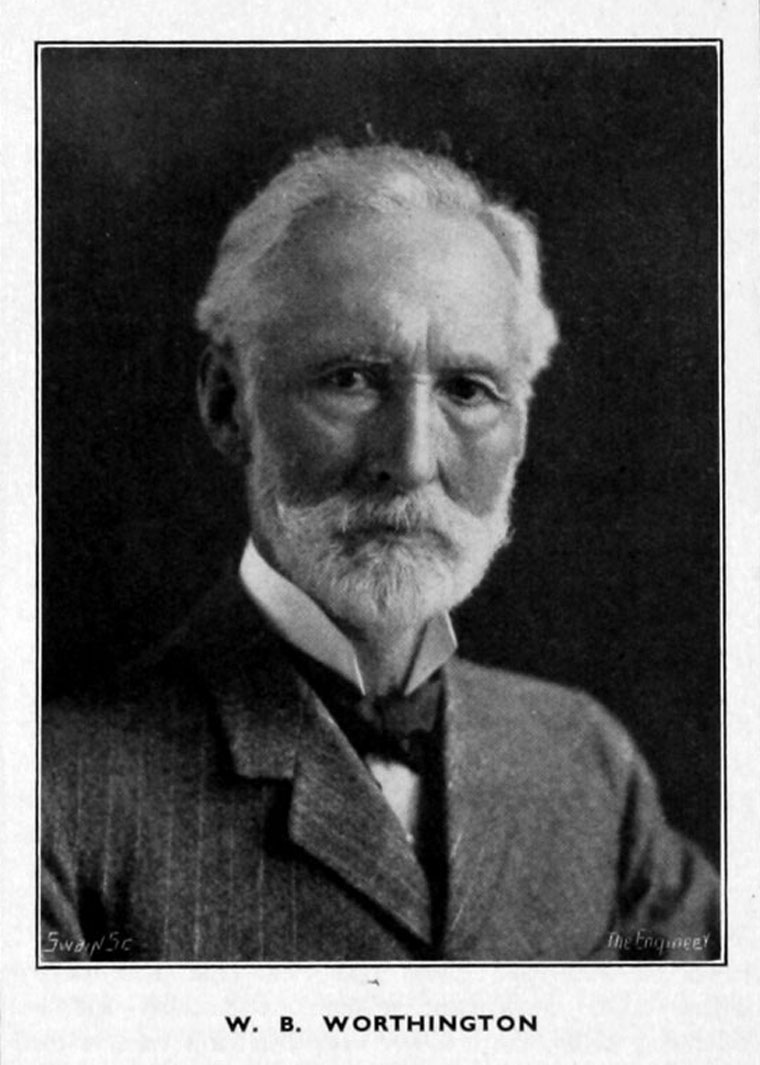 William Barton Worthington (1854-1939), Chief Engineer of the Midland Railway and of the Lancashire and Yorkshire Railway.

"The death took place on Friday, December 29th, at his home, Highfield, Bushey Heath, Middlesex, of Mr. William Barton Worthington, who, from 1905 until his retirement in 1917, was Engineer-in-Chief of the Midland Railway Company. On his retirement Mr. Worthington practiced as a consulting civil engineer in London, and in 1921-22 was President of the Institution of Civil Engineers.

W. B. Worthington came of an engineering family, and was the son of the late Samuel Barton Worthington, M.Inst.C.E., who had been a pupil of Joseph Locke, and was engineer to the Lancashire and Carlisle Railway.

He was born at Lancaster in 1854, and received his education at a private school in that town. For the purpose of completing his technical studies he attended classes at Owens College, Manchester, and graduated as B.Sc. in the University of London.

On leaving college he was articled to his father in 1873, and two years later he spent a year with Messrs. Blyth and Cunningham of Edinburgh, and was engaged on work connected with the Caledonian Railway, and the reconstruction of the Joint Station at Carlisle.

From 1876 until 1883 he was resident engineer on new construction work which was then being carried out by the London and North Western Railway Company. The work was in South Lancashire, and included the construction of the Exchange Station at Manchester and the widening of the company's line on the Liverpool and Manchester Railway from Chat Moss to Manchester.

In 1883 he was appointed to the staff of the London and North-Western Railway as assistant to his father, who was then engineer of the Northern Division, and in 1886 succeeded his father a District and Divisional Engineer, a position which he held until 1890, when he was appointed Assistant Engineer of the Lancashire and Yorkshire Railway Company. He remained with that company for fifteen years, becoming its chief engineer in 1897.

In that year Mr. Worthington accepted the post of Engineer-in-Chief of the Midland Railway Company, and held that office with distinction until his retirement in 1917. In the same year he was elected President of the Institution of Civil Engineers. but owing to illness was prevented from taking office.

In 1923 the University of Manchester recognised his services to civil engineering by conferring upon him the degree of D.Sc. He was a Member of the Smeatonian Society and of the Institution of Mechanical Engineers.

WILLIAM BARTON WORTHINGTON, D.Sc., brother of the late Edgar Worthington, Secretary of the Institution from 1898 to 1920, was associated with railway engineering throughout his career.

He was born in 1854 at Lancaster, where he received his early education, and from 1869 to 1873 he attended Owens College, Manchester, from which he graduated as a B.Sc. of London University. He was then articled to his father, Mr. Samuel Barton Worthington, who was engineer of the Lancaster and Carlisle Railway, and under whom he was engaged on the construction of Carlisle Station.

In 1875 he joined Messrs. Blyth and Cunningham of Edinburgh, who employed him on constructional work on the Caledonian Railway. In 1876 he was appointed resident engineer for new construction work with the London and North Western Railway. He was responsible for the South Lancashire district, and in this capacity he supervised the widening of the Liverpool and Manchester line between Chat Moss and Manchester as well as the building of the Manchester Exchange Station. In 1883 he became assistant to his father, the engineer for the northern division of the London and North Western Railway, and three years later he succeeded his father as district and divisional engineer.

He was transferred to the Lancashire and Yorkshire Railway Company in 1890 as assistant engineer, and in 1897 he was promoted to be chief engineer. From 1905 until 1917 he was chief engineer of the Midland Railway Company and when he retired in the latter year, he started to practise in London as a consulting civil engineer.