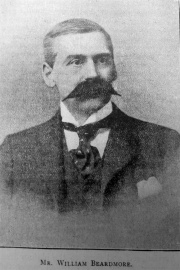 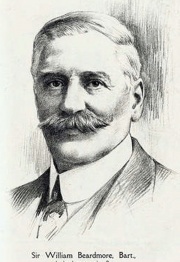 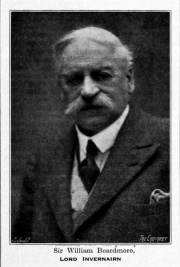 Born on 16 October 1856 at Deptford, the eldest son of William Beardmore senior and Sophia Louisa Halkman. His father had been assistant manager of the Deptford works of the General Steam Navigation Co and subsequently (1861) moved to the Parkhead Forge (steel mills and supplier to the thriving shipbuilding and railway industries on the Clyde) in the east end of Glasgow.

William junior was educated at the High School of Glasgow, Ayr Academy and the Royal Technical College (now part of Strathclyde University) in Glasgow.

1871 he was apprenticed at the Parkhead Forge; attended evening classes at Anderson's University.

1877, he enrolled at the Royal School of Mines in South Kensington, taking courses in metallurgy and chemistry.

1880 Age 24. William became a partner; on his uncle’s retirement six years later, he became the sole proprietor of the business and formed it into the limited company of William Beardmore and Co in 1902.

He diversified into armour plate production and in 1889 began making plates for high pressure Scotch boilers. Other investments quickly followed, including a 12,000 ton press in 1895 to make American Harveyized armour plate.

1899 he managed to acquire the goodwill of the insolvent shipbuilding business of Robert Napier and Sons.

At the turn of the century Beardmore embarked on a massive extension to the works: these included a new office block, a gun factory, and additional armour plate capacity.

1901 he joined a syndicate that bought Thornycroft, and he was subsequently appointed chairman. William Beardmore had hoped to make the shipbuilding firm a tied customer for his iron and steel and to expand the infant Scottish motor industry but these hopes were not fulfilled.

1902 Beardmores became a limited liability company exchanging almost 60 per cent of the capital with Vickers, Sons and Maxim for an equivalent stake in that company and a seat on the board.

During 1902 Beardmore also became the major shareholder in the motor car building business of Arrol-Johnston.

In 1902 he married Elspeth, daughter of John Tullis, owner of the St Ann's leatherworks in Bridgeton, Glasgow. They had no children.

During 1903/4 Beardmore, in co-operation with Vickers, established the Glasgow Electric Crane and Hoist Co, which was sold in 1906.

By 1904 Beardmore had lost interest in Thornycrofts.

The additions and extensions to Parkhead were completed in 1904; and the Dalmuir naval construction works, the most modern and best-equipped shipyard on the Clyde, was inaugurated during 1906.

1905 William Beardmore and Co purchased the Mossend steel works from Summerlee and Mossend Iron and Steel Co to secure supplies of ship plates and angles.

By 1913 Vickers' nominees had resigned and Beardmore had regained full executive control of the firm. He immediately took the opportunity to diversify into aircraft manufacture.

WWI: On the outbreak of war, Beardmores was immediately called on to supply huge quantities of war material, from field guns to ships and aeroplanes. Factories for munitions work purchased in Paisley and Coatbridge. Beardmore extended the company's interests during the war, buying Alley and MacLellan, owners of the Sentinel works at Polmadie, Glasgow, and a steam-wagon factory at Shrewsbury. On his own account he purchased a majority holding in the Sheffield steelmakers, Dunford and Elliott.

1921 he was created Baron Invernairn of Strathnairn, taking his title from his Inverness-shire home.

1928 Beardmore was ousted from the board; over the next two years much of his extensive empire was closed down. In enforced retirement, Invernairn witnessed the collapse of many of his other interests, including Arrol Johnston.

1936 He died on 9 April at his home, Flichity House, Strathnairn, Inverness-shire, where he was buried. He was survived by his wife.

Beardmore sponsored Ernest Shackleton’s 1907 Antarctic expedition which saw a large glacier named after him (Beardmore Glacier). He was a Member of the Royal Institution of Naval Architects, the Institution of Mechanical Engineers (IMECHE), the Iron and Steel Institute, and the Institution of Shipbuilders and Engineers in Scotland. He was created a baronet in 1914 and raised to the peerage as Lord Invernairn in 1921. William Beardmore died at home of heart failure on 9 April 1936, aged 79.

THE RT. HON. LORD INVERNAIRN, P.C., will be remembered for the influence which he exerted upon industry in Glasgow and the west of Scotland generally. The products of the works he controlled achieved notable successes on land, at sea, and in the air.

Born at Greenwich in 1856, William Beardmore entered his father's works, the Parkhead Forge, at the early age of 14, and there he served his apprenticeship. Subsequently he studied at the Royal School of Mines, South Kensington, and, returning to Parkhead, became a partner in the firm in 1880. Six years later he assumed full control of the works, introduced steel manufacture and initiated the making there of heavy armour plate by the Harvey cementation and chilling process. A few years later he developed a successful process of his own for armour plate manufacture, and its value was at once recognized by the Admiralty. The firm secured numerous British and foreign naval contracts for this product.

In 1898 the title of the firm was changed to William Beardmore and Company. Lord Invernairn, or as he then was, Mr. William Beardmore, became chairman and managing director, which office he continued to hold until his retirement in 1929.

In the year 1905 gun manufacture was introduced at the Parkhead Works and naval guns ranging from 12-pounders to 15-inch guns were made.

In the year 1900 the firm entered the shipbuilding industry by acquiring the shipyard of Messrs. Robert Napier and Sons, Ltd., at Govan, and, in 1902, built their first cruiser, the Berwick, as well as several smaller vessels.

But in 1904 the firm purchased a 70-acre site at Dalmuir where a complete shipyard, with fitting-out basin and engineering works, was laid out, and the shipyard business was transferred from Govan in 1904-5. At Dalmuir a long line of notable battleships was constructed commencing with the Agamemnon launched in June 1906, followed by the Conqueror in 1911, the Benbow in 1913, and the Ramillies in 1916; eight light cruisers were also constructed between 1903 and 1919, and during the War large numbers of destroyers, submarines, and various other naval craft were built. Extensions were also carried out, notably the East Yard at Dalmuir for the construction of oil carriers and general cargo vessels. No less than 650 fighting aeroplanes and 73 warships, including the first aeroplane carrier, were built by the firm during the War at Dalmuir. Twenty warships were overhauled and refitted.

From 1919 onwards several notable British merchant ships were built, as well as the famous Italian liners of the Conte class. Lord Invernairn was also a pioneer in the application of internal combustion engines. He fitted the gunboat Rattler with experimental gas engines in 1907. Later, devoting his attention to the Diesel engine, he developed the Beardmore semi-Diesel type which his firm supplied to a large number of small vessels, and subsequently he manufactured the Franco—Tosi type of engine under licence.

Extensive airship works at Inchinnan were established where, amongst others, Lord Invernairn constructed the airship R 34, which was famous as the first airship to make the double Atlantic crossing. Other works which he established were the Mossend steel works, the Speedwell engine works at Coatbridge, and works at Paisley, Anniesland, and Dumfries. In recognition of his national services he was created a baronet in 1914.

In 1921 he was raised to the peerage, and took the title of Lord Invernairn of Strathnairn.

His association with the Institution extended over forty-nine years; he was elected a Member in 1887 and was made an Honorary Life Member in 1934.

He contributed two papers, "The Heat Treatment of Large Forgings," and "Sugar Machinery," to the Proceedings. He was also president of the Iron and Steel Institute in 1918, and was a Member of the Institution of Naval Architects.

His death occurred at his seat, Flichity, Inverness-shire, on 10th April 1936, in his eightieth year.