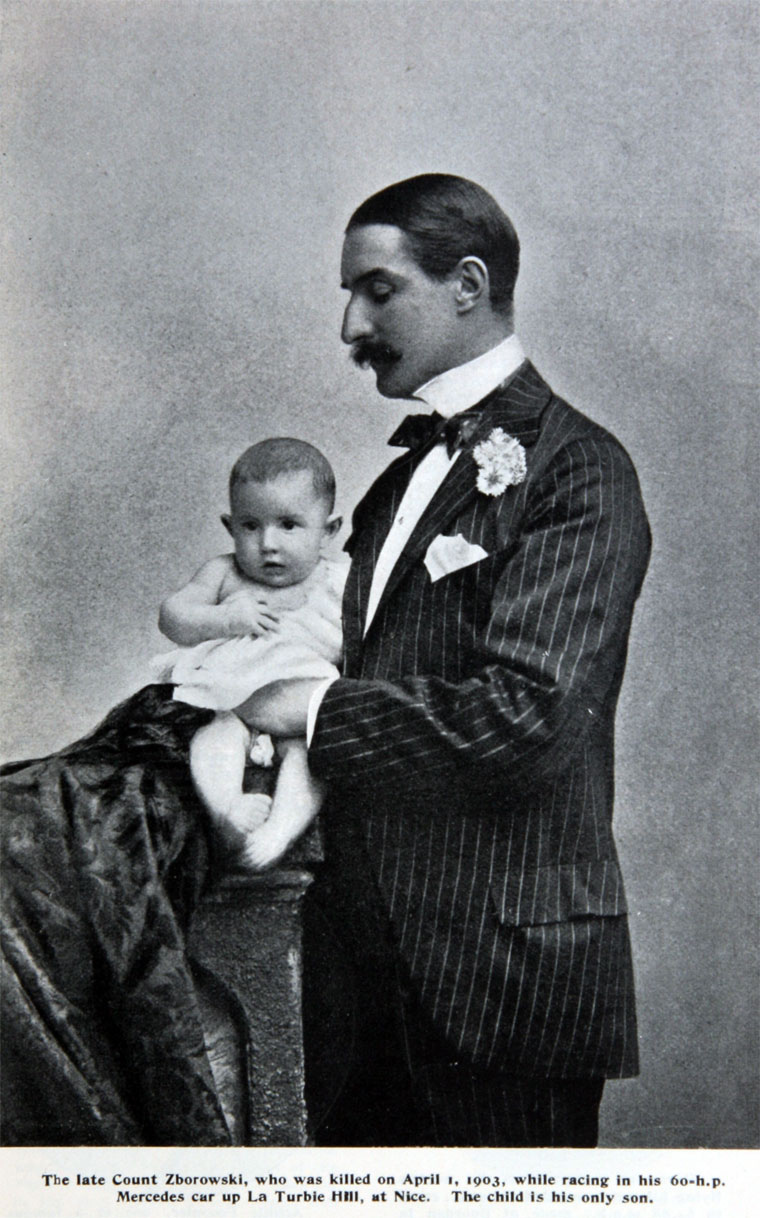 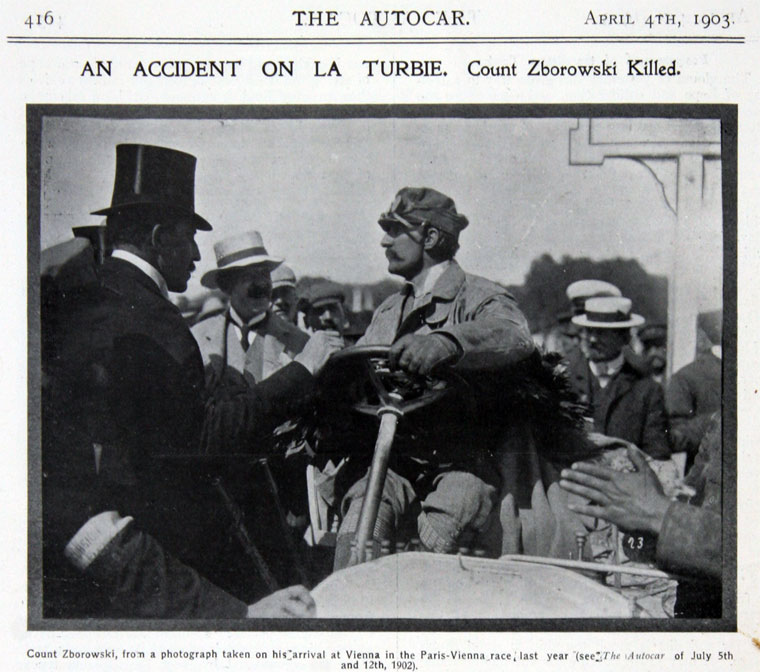 Count William Eliot Morris Zborowski (1858–1903) was a racing driver, and died in a racing crash, in 1903 at La Turbie Hillclimb in France near Nice. His wife was a wealthy American heiress, born Margaret Laura Astor Carey (1853–1911), a granddaughter of William Backhouse Astor, Sr. of the prominent Astor family. She had been Baroness de Stuers before her divorce and marriage in 1882 to Count Eliot Zborowski.

A gloom has been cast over the meeting by the fatal accident which occurred to Count Zborowski. He was driving his Mercedes in the La Turbie hill-climbing contest, which took place to-day, and in taking the sharp turn where Bauer came to grief two years ago he upset and was thrown against a rock and instantly killed. His companion was terribly injured, and was taken to the hospital where it is reported he has since died. The race was at once stopped, and it seems probable at the moment that the meeting will be abandoned entirely.

The famous mountain begins on the outskirts of Nice and rises to the village of La Turbie - a distance of 9.6 miles. The road is fairly well graded, but the turnings are nevertheless sharp and very dangerous for cars travelling at racing speed. For only about half the way does the road rise about eleven per cent. Here and there the incline is very severe, but the latter half of the road grades tip slightly to the village which gives the route its name. Count Zborowski succeeded in doing the journey in 25m. 21s. last year, when the fastest time was 15m. 4s. There is no doubt that with the high powers of modern racing cars, La Turbie is not a suitable hill. It is not steep enough to reduce the speed of the motors sufficient to make the very sharp bends safe, and while racing must always be dangerous, it appears that La Turbie is unduly so.

Mr. E. M. C. Instone, who knew Count Zborowski well, writes: "The news of Count Zborowski's death will come as a shock to the automobile world, in which he for all too brief a period played so prominent a part. In common with many other notable automobilists, he commenced his career on a De Dion tricycle, and then in the spring of 1900 purchased one of the first 28 h.p. Daimlers constructed at Cannstatt [This vehicle was illustrated in The Autocar of January 6th, 1900. ED.], and similar in type to the vehicle upon which Bauer was killed while participating in La Turbie of 1900. Although I never had the opportunity of driving with the Count on the more recent types of racing cars driven by him, I accompanied him on several occasions on the 28 h.p. Daimler in France and therefore was not at all surprised to read of his subsequent racing successes, for his skill as a driver was beyond question, and he was endowed with that combination of sang froid and prudence which avoids all unnecessary risk and tackles the in evitable with resolution. Count Zborowski was interested heart and soul in the movement, and I was always ready to examine anything new that might be brought to his notice."