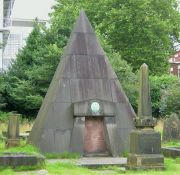 1784 March 20th. Born at Marsden, near Nelson, Lancs, the eldest son of Alexander Mackenzie and his wife Mary (d.1828). There were nine other children in the family and his brother Edward Mackenzie (1811-1880) was involved with William in business.

Mr. William Mackenzie was born at Burnley, Lancashire, on the 20th March 1794, at which period his father was engaged in the construction of the Leeds and Liverpool Canal.

Young William Mackenzie was early apprenticed to a weaver, but the occupation was so distasteful to him, that he burned his warp, and ran away.

In the year 1811 he was bound apprentice to Mr. Thomas Clapham, lock carpenter of the Leeds and Liverpool Canal; he was soon transferred to the works of the Harbour, at Troon, Ayrshire, then constructing under the direction of Mr. John Clapham, the resident engineer, who was also the agent for the Duke of Portland; here commenced his acquaintance with the construction of cranes, waggons, caissons, and the general plant for engineering operations, as well as the modes adopted in submarine building, as the foundations of the works were laid in a depth of 2 fathoms below low-water mark.

On the sudden decease of Mr. Clapham, which occurred from the accidental discharge of a fowling-piece, he was released from his indentures, and in a short time was employed by Mr. Cargill, the contractor, at the Craigellichie Iron Bridge, then erecting under Mr. Telford.

He then returned to England, and was engaged on various canal and other works, until about 1816-17, when he was employed by Mr. M'Intosh, as agent in measuring, levelling, setting out, and taking account of the work on the Union Canal, between Falkirk and Edinburgh, then constructing under Mr. Hugh Baird.

From thence he was transferred to the Gloucester and Berkeley Canal, where he remained until its completion, and then in 1824 quitted the employment of Mr. M'Intosh, for an appointment by Mr. Telford to, superintend the construction of the Mythe Bridge, across the Severn, near Tewkesbury.

He was then engaged until 1832, in fulfilling the duties of resident engineer, under Mr. Telford, on the Birmingham Canal, where the works, executed by him, are still considered the finest of the kind in Great Britain.

At this period the railway system began to assume an important position, and although it required a struggle to overcome his prejudice against the new order of things, Mr. Mackenzie, at last determining to swim with the stream, became the contractor for the Passenger Tunnel, from Edge Hill to the Lime Street station, of the Liverpool and Manchester Railway, under Mr. Stephenson.

Other contracts, on the Grand Junction, and the Glasgow, Paisley, and Greenock lines, under Mr. Locke, M.P., on the North Union and the Midland lines, under Mr. Vignoles, and on the Manchester and Salford Junction Canal, followed in rapid succession.

In 1840, he undertook several extensive contracts for the hydraulic works of the Shannon Navigation, under Mr. Rhodes. The large weir, &c., at Killaloe, the weir and lock at Mellick, the bridge and approaches at Banagher and at Shannon Bridge, the lock and weir at Roorky, with the dredging operations and deepening the shallows, were all works of importance, and attended with difficulties in their execution, which demanded all his skill and energy to surmount; yet so perfectly did he meet the wishes of the Shannon Commissioners, that on competing the contracts, they voluntarily testified, that he was the only contractor from whom they had parted, without litigation of any kind.

In 1840 commenced the connexion with Mr. Brassey, in conjunction with whom, the greatest amount of railway works in France, and elsewhere, ever previously undertaken by one firm, was successfully executed. The following enumeration will give some idea of the extent of the contracts.

The greater portion of the Paris and Rouen line, and the whole of the Rouen and Havre, including the stations and the maintenance of way of both lines, as well as the line from Rouen to Dieppe, all under Mr. Locke, and Mr. Newmann. Part of the Amiens and Boulogne line. The Canal works at Bar le Duc; and the Orleans, Tours, and Bordeaux contract, which latter is still in course of execution.

The revolution of 1848 put a stop to many contemplated undertakings, and the political state of France, up to the present time, has to a certain extent, arrested the progress of all peaceful enterprises, and railway progress on the Continent generally.

In that year, however, the short railway, 18 miles in length, between Barcelona and Matara, was completed under Mr. Locke.

In round numbers, the amount of the contracts taken, and of work executed, by Mr. Mackenzie alone, and in conjunction with Mr. Brassey and Mr. John Stephenson, may be estimated at upwards of seventeen millions sterling.

It was not, however, so much by the amount of the work undertaken, as by the manner of executing it, that Messrs. Mackenzie and Brassey astonished our Gallic neighbour; and when on the fall of the great viaduct at Barenton, instead of entering into litigation, or contesting their liability, they stepped forward without a murmur, and commenced the construction as a matter of ordinary duty, the most sceptical were obliged to admit the good faith and integrity of the English contractors.

Nothing but the most untiring energy and perseverance, allied with great physical power, and moral courage, could have supported any man through such mental and bodily labour: but with a quick and ardent temperament, he combined a kind and benevolent disposition, which aided him to overcome difficulties that would have worn out other men.

The fatigue he underwent, proved at last too much for his frame; in 1848 he suffered from an attack of gangrene in his foot, induced by exposure to the cold. In the following year, whilst on his way to Italy, he was again attacked by the same disease, which carried away his foot up to the ankle join the, however, apparently recovered, but still suffered severely at times, and on the 19th of October, 1851, in his 58th year, he expired, generally esteemed by all with whom he had come in contact, in his extensive affairs, and affectionately regretted by his family and friends, for as a son, a brother, and a friend who had few equals.

Mr. Mackenzie’s industry and exertions were crowned with success, and he has left an ample fortune. On the day he died, his name was placed on the commission of the peace, for the county of Dumfries, where he had purchased an estate.

In the course of his works in France, he was admitted to the confidence and esteem of H. M. Louis Philippe, with whom he had frequent and lengthened interviews; and at one time it was asserted, that he exercised considerable influence over that Monarch‘s opinions; Mr. Mackenzie, however, always asserted that the topics of his communications were only the difficulties encountered in the execution of the public works, and the advantages to be expected by their ultimate extension.

At the opening of the Tours and Poietiers section of the Orleans, Tours and Bordeaux Railway, the Prince President of the French Republic, after complimenting Mr. Mackenzie on the rapid execution of the work, announced the intention of conferring on him the Cross of the Legion of Honour, at the same time expressing a hope, that the English Government would permit him to accept and wear it.

Mr. Mackenzie joined the Institution as a corresponding Member in 1828, and was transferred to the class of Members in 1837. His occupations prevented his frequent attendance at the meetings, but he always evinced anxiety for the welfare of the society, and was ready to concur in any measure for its benefit.

At his decease the English Press and the French Journals united in praise of him as a man, and in regret for the premature decease of one of the men of the new era.