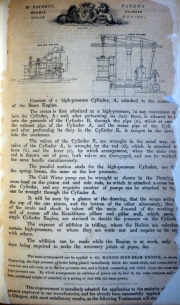 1848. Description of the improved engine 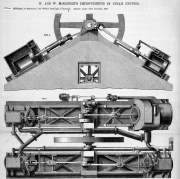 1813 Born in Paisley, the son of John McNaught who invented the revolving cylinder as an attachment to the steam engine indicator and received a silver medal from the Society of Arts of Scotland.

c.1832 Was given a job in India supervising the Fort Gloster mills.

1836 McNaught returned to Scotland due to bad health.

1838 McNaught joined his father in business.

When confronted with the problem of increasing power in cotton factories to serve extensions without scrapping the existing steam engine, he added a high-pressure cylinder near the crank end of the beam.

1845 McNaught patented the application of an auxiliary cylinder situated midway between the crank shaft and the main centre for steam engines. This he put into manufacture starting with the Barrowfield Cotton Mills.

1849 Left Glasgow and moved to Manchester because orders in Lancashire were so numerous.

1852 Details of his Double Cylinder Steam Engine installed at Bartholomew and Co at Barrowfield cotton mill.[1]

1859 One of the original directors of the Boiler Insurance and Steam Power Co.

This gentleman died at his residence in Manchester on the 8th inst., after a long and patiently-borne illness, in his 68th year. His body was removed to Glasgow, where a large party met in the Queen's Hotel, on the 13th inst., to accompany his remains to the family burying place at Sighthill Cemetery, amongst the party was Sir Peter Coats, of Paisley, who had encouraged Mr. McNaught throughout his whole career to perseverance and progress. The funeral ceremonies were conducted by the Rev. John 0rr, of the Tron Parish Church, Glasgow, formerly of Liverpool, and an old friend of the deceased.

Mr. William McNaught was born in Paisley on the 27th May, 1813. His parents removed into Glasgow in 1820, where he received a good education. Being desirous of following out the calling of an engineer, which was also the profession of his father, he was duly apprenticed to the late Mr. Robert Napier, of the Vulcan Works, Washington-street, Glasgow, were he had quite completed his fourteenth year, working diligently at his trade by day, and attending the science classes of the Anderson University in the evenings. He had acquired such a knowledge of his business, that at the age of nineteen, on the termination of his apprenticeship, he was offered the charge of the Fort-Gloster Mills on the Hooghly, which offer he at once accepted and Immediately set out on his way to India. His health however becoming affected by the climate, he was obliged to return to his native country in 1836. Some years prior to this his father, Mr. John McNaught, had invented the revolving cylinder as an attachment to the steam engine indicator, for which he had received the silver Medal of the Society of Arts for Scotland in the year 1830, and had begun to manufacture these indicators in connection with his business of a consulting engineer. The McNaught indicator was a very great improvement over what had been hitherto used for the same purpose. It will be remembered that the first instrument known as Watt's indicator did not describe a diagram of the action of the steam in the cylinder; it had, however, the miniature cylinder connected to the main cylinder, and the small piston with spiral spring attached. An index finger was fixed to the top of the piston rod of the indicator which pointed to a scale marked off on a frame contiguous to the instrument, the variations taking place inside of the main cylinder. This indicator was greatly improved by substituting a lead pencil for the index finger and causing the frame with a card fixed to it, to move simultaneously with the main piston, the return stroke being effected by means of a back balanced weight attached to the other end of the frame. By this means an exact picture was drawn on the card of the performance of the steam in the cylinder, but Mr. John McNaught's invention of the revolving cylinder and other improvements simplified and extended the use of the indicator so as to make it as useful to the engineering profession as the stethoscope is to the medical profession. Mr. William McNaught joined his father in 1838 in this business in Robertson-street, Glasgow, where it is carried on to this day.

Glasgow at this time was extensively engaged in the cotton manufacture, the general type of engine employed being the beam single cylinder condensing class, working with a boiler pressure seldom exceeding 7lb. per square inch. Additions constantly being made to the number of spindles and looms, demanded more power, and in their efforts to attain that, serious breakdowns were the inevitable result.

Mr. Wm. McNaught being consulted by the manufacturers on the subject, gave the matter· his closest attention, which resulted in his application of an auxiliary cylinder situated midway between the crank shaft and the main centre. This arrangement he patented in December, 1841, and its first application to an engine at the Barrowfield Cotton Mills, Glasgow, is at work to this present day. This change at the same time converted the engine into one of the compound principle, and was a safer· arrangement than those made under Woolf's patent, the latter exerting a very severe pressure at the main centre bearings, which Mr. McNaught's arrangement rendered almost nominal. The saving of fuel resulting from this method of compounding, and the other advantages it possessed, brought it speedily into favour, and in 1849 Mr. McNaught had to remove his headquarters to Manchester, his Lancashire orders being so numerous and the field being much wider for the application of hill improvements. There he continued to reside up till bill death. He was also one of the original promoters of the Boiler Insurance and Steam Power Company, Limited, and was on the board of directors since 1859, the year of its formation, and acted as chairman from 1865 till within a short time of his decease. The insurance of steam engines, which was carried out for some time by this company, and which it has recently again put in operation, originated with Mr. McNaught. All through life he proved himself the worthy son of a worthy sire, and both father· and son have left their names honourably inscribed on the roll with those who, by their useful inventions, have left the world a better than they found it. He leaves a widow and grown-up family to mourn his loss.