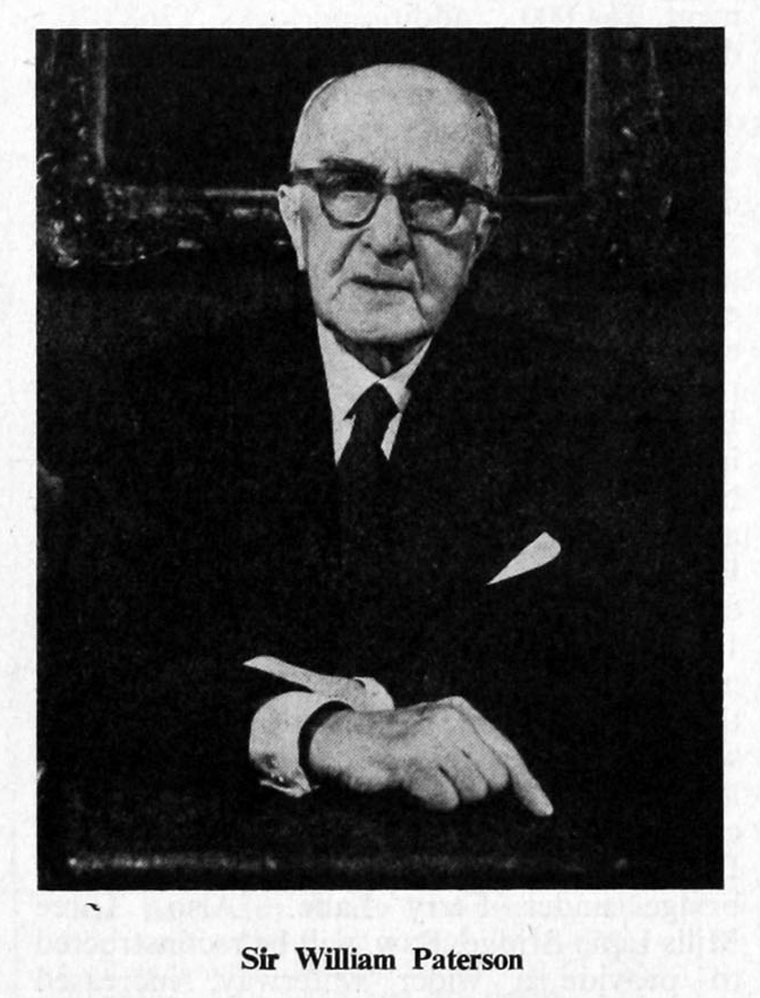 William Paterson (1874–1956), of the Paterson Engineering Co, mechanical engineer. and designer of the Anderson Shelter

For more than fifty years, Sir William Paterson directed the affairs of the Paterson Engineering Company, Ltd., which he founded in 1902. His death, which we record with regret, occurred on Thursday, August 9th, a few days after his eighty-second birthday.

William Paterson, who was the son of James Paterson, was born at Roslin and began his technical education at the Heriot Watt College, Edinburgh. Thereafter he served an apprenticeship with a firm specialising in paper mill machinery.

As a young man he was quick to see the increasing importance of water purification, and, as already noted, he decided at the beginning of this century to form a company for the development of that particular branch of engineering. As his business progressed, William Paterson introduced many new principles in the science of water purification. They included the excess lime process for softening and sterilising and the use of ozone as a sterilising agent. Another development was the use of chlorine gas for inhibiting algal growths in power station condensers, a method of treatment which, it has been suggested, has resulted, in this country alone, in a saving of probably 500,000 tons of coal a year.

In the course of his career William Paterson filed over seventy British patents, many of them foreshadowing improvements which were not developed on a practical scale until years later.

But although the engineering aspect of water purification occupied the greater part of Sir William's distinguished career, there were other directions in which his technical skill was used to good effect. Among them was his outstanding service to the nation in the second world war. In 1938 Sir William was asked by Lord Waverley, who was then Sir John Anderson, Minister of Home Security, if he could devise an air raid shelter to give protection against blast and flying debris. Another requirement was that such a shelter could be rapidly produced in very large quantities at a minimum cost. The result of this request was the Anderson shelter; it was patented in order to prevent commercial exploitation, and Sir William Paterson presented the patent to the nation.

His knighthood, conferred in 1944, was a recognition of this service. Throughout this period, and for several years after the war, Sir William continued to take an active part in the affairs of his company; he had, in fact, passed his eightieth birthday when, in January, 1955, he decided to retire from the chairmanship.

No account of Sir William Paterson's work could be complete without some reference to his services to a number of professional institutions. He was an honorary member of the Institution of Water Engineers and of the Royal Society of Health, an honorary fellow of the Heriot Watt College, a vice-president of the Junior Institution of Engineers, and a life member of the American Waterworks Association. Since 1910, Sir William had been a member of the Institution of Mechanical Engineers. He also served on the Committee of the Benevolent Fund of that Institution, revealing in his work for it that behind an apparently stern countenance there lay a heart easily softened to sympathy for those dogged by undeserved ill-fortune, and forgiving ever to those who in part bring sorrows and disasters on themselves.

Sir William Paterson, was the founder, in 1902, of the Paterson Engineering Co., Ltd., and was responsible for the introduction of many new principles in the science of water purification, including the excess lime process for softening and sterilizing, and the use of ozone as a sterilizing agent.

He filed over seventy British patents, and one, which he presented to the nation, was for an air raid shelter which he was asked to devise during the 1939-45 war, and which was subsequently known as the 'Anderson' shelter. In recognition of this service a Knighthood was conferred upon him in 1944.

He retired in January 1955 as Chairman of his company, after passing his eightieth birthday.

His education was gained at Heriot Watt College, Edinburgh, and afterwards he served an apprenticeship with a firm specializing in paper-mill machinery. He was elected a Member of the Institution in 1910, and for a number of years gave useful service as a member of the Benevolent Fund Committee. He was a Vice-President, Junior Institution of Engineers, and an Honorary Member, Institution of Water Engineers.

His death took place on 9th August 1956, a few days after his eighty-second birthday.