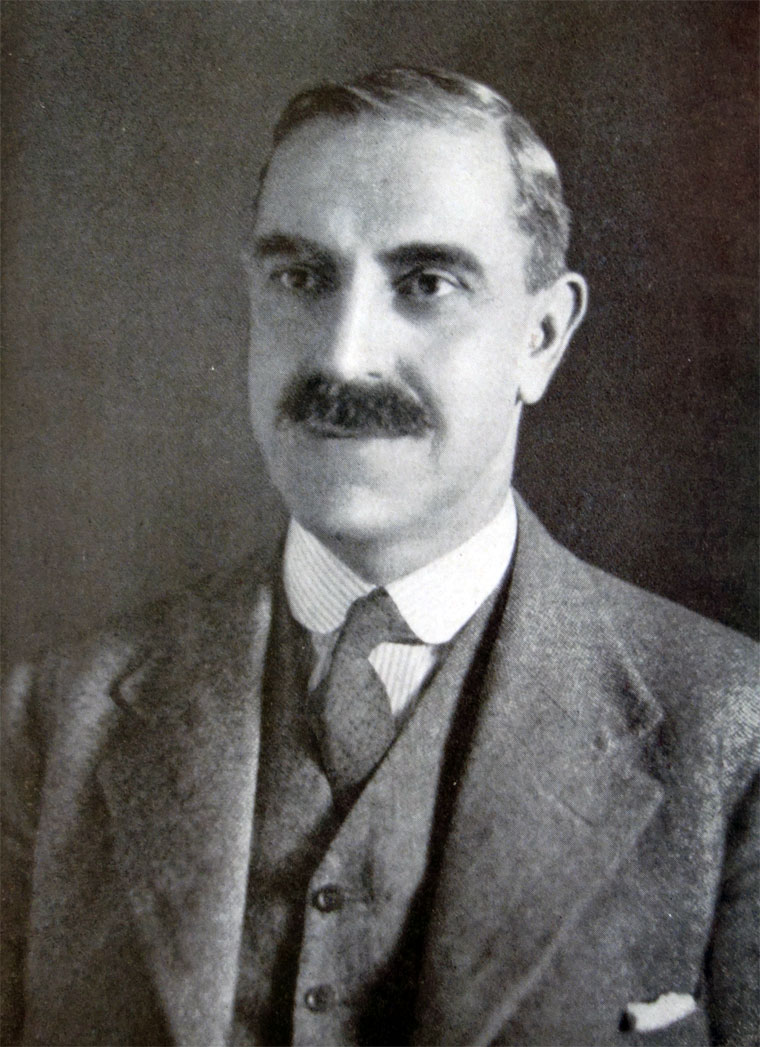 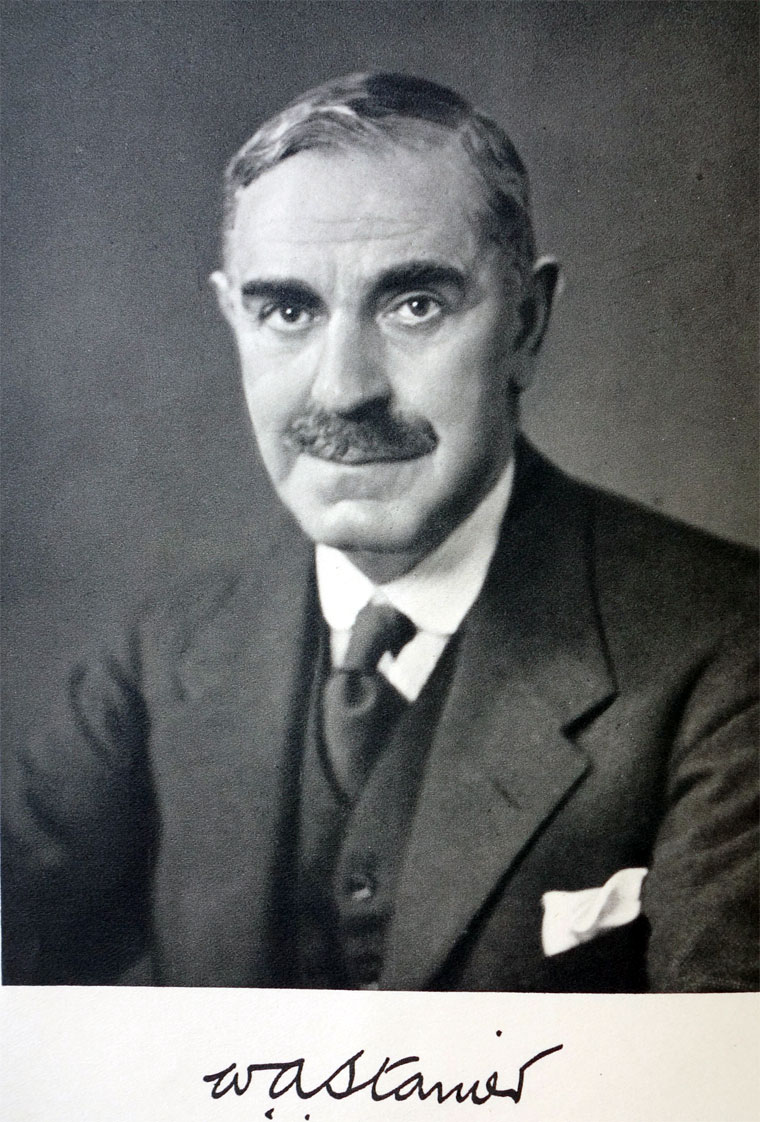 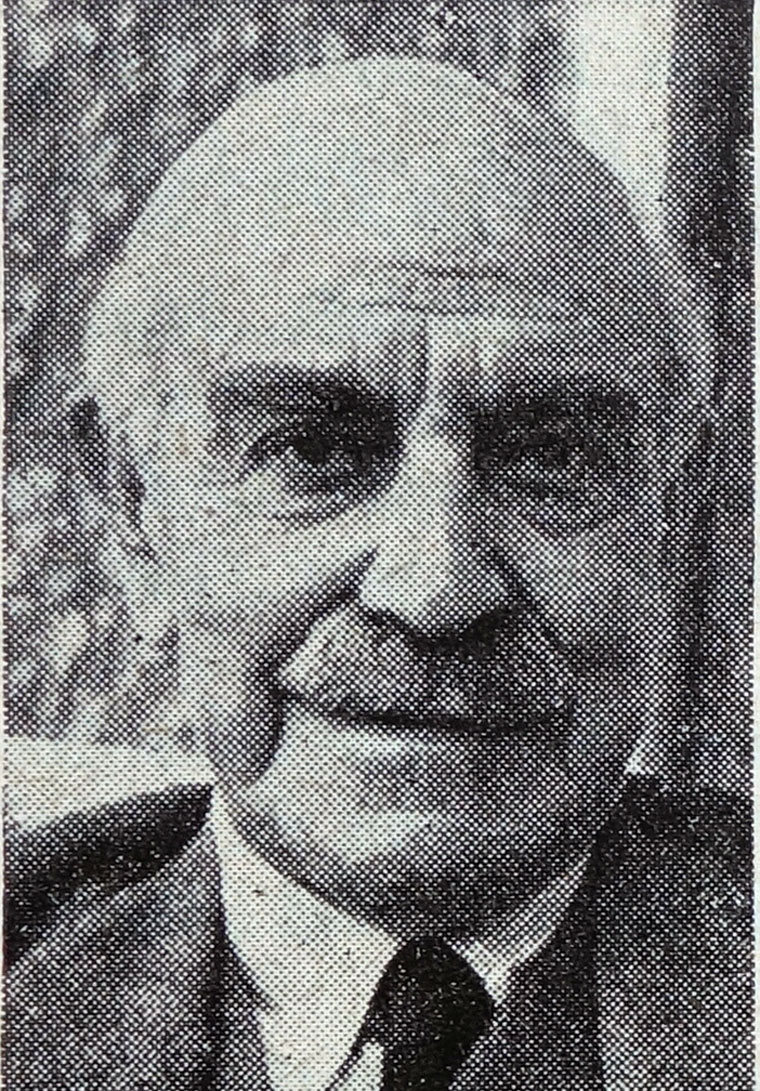 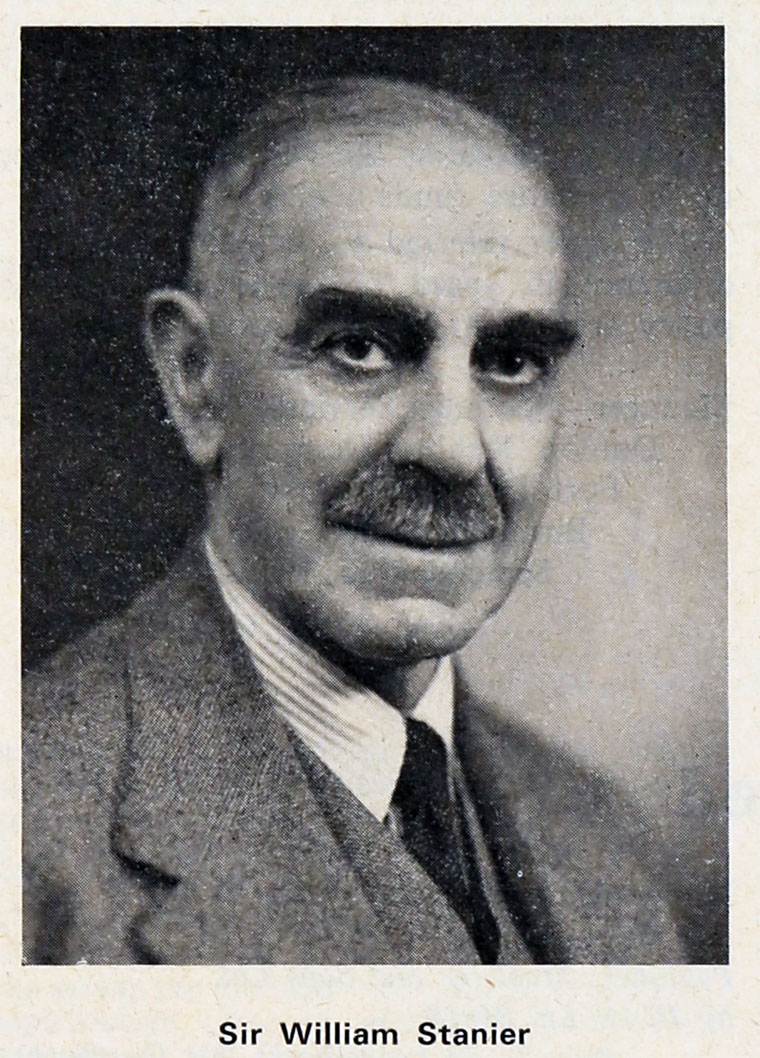 He was born in Swindon where his father worked for the Great Western Railway (GWR) as William Dean's Chief Clerk. He was educated at Swindon High School and also for a single year at Wycliffe College, Stonehouse, Gloucestershire. He followed his father into a career with the GWR. Between 1897 and 1900, Stanier worked as a draughtsman, before becoming Inspector of Materials in 1900. In 1904, George Churchward appointed him as Assistant to the Divisional Locomotive Superintendent in London. In 1912 He returned to Swindon to become the Assistant Works Manager. In 1920 he was promoted to the post of Works Manager.

He was head-hunted and became Chief Mechanical Engineer (CME) of the London, Midland and Scottish Railway from January 1, 1932.

He was knighted in 1943 and was elected a Fellow of the Royal Society in 1944, on his retirement, the only railway engineer other than George Stephenson to receive the honour.

He was also president of the Institution of Mechanical Engineers.

William Stanier, with the backing of Sir Josiah Stamp, Chairman of the Company, reversed the small engine policy and saved the LMS. Designs introduced by Stanier include:

Sir William Stanier FRS (Past-President), one of our really great railway engineers, died on 27th September at the age of 89.

Educated at Wycliffe College and trained at the Swindon works of the Great Western under the awesome Mr Churchward, Sir William's talent as a designer bore its finest fruit during his time as Chief Mechanical Engineer of the London, Midland and Scottish Railway. He was appointed to this post in 1932 at a time when the locomotives produced by the LMS were not doing too well. His instructions were to remedy the situation and, with thoroughness, charm and originality, he revolutionised the line. Among his best-known designs are: the 4-6-0 mixed traffic engine (Black Staniers); the 2-8-0 freight engine; and the Coronation class, Pacific-type engine which attained a test speed of 114 mile/h. He retired in 1944 but was retained as a Consultant by the Company.

During the war years Sir William acted as Scientific Adviser to the Ministry of Production. His services to engineering won him a knighthood in 1943 and, a year later, he was elected a Fellow of the Royal Society. He was awarded the Gold Medal of the Institution of Locomotive Engineers in 1957 and this Institution presented him with the James Watt International Gold Medal in 1963.

An interview with him by Mr Rex Wailes was published in our October 1961 issue.

Sir William became an Associate Member of the Institution in 1901 and transferred to Member in 1908. Elected a Vice-President in 1937, he was President in 1941. His work for the Institution was long and varied and we mourn him as a devoted friend. In the wider sense we have lost a genius of locomotive design and another link with an outstanding period of railway engineering progress.

"WE regret to record the death, on September 27, of Sir William Stanier, F.R.S. Sir William, who was best known a chief mechanical engineer of the London, Midland and Scottish Railway, came of a railway family his father, W. H. Stanier, being stores superintendent at the Great Western Railway works, Swindon.

William Arthur Stanier was born at Swindon on May 27, 1876, and educated at Wycliffe College, Stonehouse. On his sixteenth birthday, in 1892, Stanier started an apprenticeship at Swindon his first job being in the saw mill fitting shop. In those days the chief mechanical engineer of the G.W.R. was William Dean, and it is recorded that the first engine on which the young apprentice worked was Dean's 4-4-0 No. 14 "Charles Saunders". The policy at Swindon was to move young men round the various departments when they were singled out for promotion, thus giving them a very wide range of experience, and Stanier had seen a great deal of locomotive building by the time his apprenticeship came to an end.

On completion of his apprenticeship Stanier moved into the drawing office. At this time, 1897, although Dean was still C.M.E., the influence of another famous G.W.R. engineer, G. J. Churchward, who was to succeed Dean, was beginning to be noticed, and during Stanier's three years in the drawing office an important series of locomotives was designed. This led to the Churchward Swindon standard taper boiler, a design which Stanier was later to introduce to the L.M.S.

In 1900 Stanier was appointed to the post of inspector of materials. Here again he was involved in some interesting developments, for Swindon was then turning to the extended use of steel in place of wrought iron, and introducing new manufacturing techniques. Stanier remained as inspector of materials until 1902, when he was transferred to the operating side as technical inspector to the divisional locomotive, carriage and wagon superintendent, Swindon. In 1903 he was transferred temporarily to London, to take charge of the locomotive sheds there during the absence abroad of the superintendent. It was a heavy responsibility for a young man of 27, but Stanier aquitted himself well and on his return to Swindon was told that he was being sent back to London as assistant to Armstrong, the local superintendent.

At this time new locomotive sheds at Old Oak Common were being built, giving Stanier further valuable experience, and Churchward's new locomotives were going into service. Stanier was not long at London. In 1906 he returned to Swindon as assistant to the locomotive works manager, and in the same year he received further promotion, becoming divisional locomotive superintendent.

In 1912 promotions at Swindon left the office of assistant work manager vacant, and Stanier was appointed to the post. Again, the appointment came at a time when many changes were pending. After the outbreak of war in 1914 Swindon was soon involved in the manufacture of munitions, and it fell to Stanier to adapt the machines to their new duties, or to design new ones where adaptation was impossible. In 1920 Stanier was promoted to locomotive works manager at Swindon.

Churchward retired from the post of C.M.E. in 1922 and he was succeeded by C. B. Collett, who appointed Stanier as his principal assistant. In 1927 the first of the famous "King" class, "King George V", appeared, and Stanier was selected to accompany the engine to America, where it took part in the Baltimore and Ohio Railroad centenary celebrations.

Stanier's next move was in 1932, when he became chief mechanical engineer of the L. M .S., where he was at once faced with a pretty formidable task. The locomotive stock of the L.M.S. was at the time not as good as it might have been, and the new C.M .E.'s job was to provide a range of standard locomotives, as few as possible to cover the operating requirements of the whole railway. For a new man, in an organisation which was in many ways quite different from the one to which he had become accustomed, the task was not easy. There is always, when an outsider is appointed to a high executive position, the possibility that there may be· some internal jealousy and friction as a result. So it was at Euston, but it is on record that Stanier's personality, his ability to "get on" with people, soon overcame such opposition as there was to his appointment.

Stanier brought to Crewe locomotive works a vast experience of all aspects of locomotive work, and an appreciation of the value of standardisation which he had acquired under Churchward at Swindon. Some Swindon features were transferred to Crewe the taper boiler was an outstanding one but they went on merit, not because Stanier was a Swindon man. On the contrary, he was soon at work on his own range of new designs, the first of which, a 4- 6- 0, was built in considerable numbers straight off the drawing board. He then built two "Pacifies " , Nos. 6200 and 6201, which, after a few trial runs were put to work on the " Royal Scot" expresses between Euston and Glasgow.

Six new designs followed, including the justly celebrated "Black Fives". It was said of the class-5 engines that there was never a locomotive so universally acclaimed. More standard classes followed, and then came an experimental engine, the "Turbomotive", which was driven by team turbines. It achieved a certain amount of success in operation, and some engineers felt that the experiment ought to have been continued, but the engine was ultimately rebuilt in orthodox form.

By 1936 the new designs from Crewe were going along satisfactorily, and a new activity was pending for Stanier. In the previous two years the Government-owned railways of India had shown heavy operating losses, and an expert enquiry into the causes was suggested. Sir Ralph Wedgwood, chief general manager of the L.N.E.R. and Stanier were invited to conduct the enquiry, and they accordingly arrived in Bombay in November, 1936. Their report had only just been published when a serious accident on the Indian railways gave further evidence that things were not as they should be, and Stanier was appointed to a committee which had the duty of examining all aspects of the design and operations of three classes of engines used in India. A very lengthy and detailed report was published in due course.

The locomotives which had given trouble in India were "Pacifies", and during his membership of the enquiry committee, Stanier was developing a "super 'Pacific' " of his own for the L.M.S. He was thus specially qualified for his enquiry work for his designs had taken into account all the factors which, through neglect, had caused disaster in India. The "super 'Pacifies' ", generally known as the "Duchesses", were highly successful, and were used with the celebrated "Coronation Scot" express between Euston and Glasgow in 1937.

By the time war broke out in 1939, Stanier had virtually carried out the task he was appointed by the L.M.S. to do, and in 1942 he was seconded to the Ministry of Production as scientific adviser. In 1944, already past what is normally regarded as retiring age, Stanier resigned from the L.M.S., though he continued to give his services as a technical consultant as required. So ended an active career of over fifty years on two major railways, in the course of which Stanier had risen from being an ordinary apprentice to hold the highest engineering position a railway can offer. In his retirement he continued to take a keen interest in railway matters.

Recognition of his services to railway engineering came to Stanier in his lifetime. He was knighted in 1943 and in 1944 he had the honour of being elected a Fellow of the Royal Society. His fellow engineers also honoured him: he was awarded the Gold Medal of the Institution of Locomotive Engineers in 1957, and the James Watt International Medal of the Institution of Mechanical Engineers in 1963. Outside his railway career he was a member of the Aeronautical Research Council and a director of Power Jets Ltd.

Sir William Stanier was trained in what was sometimes described as the finest possible training ground for an engineer a large railway works. This was certainly true for many years (and no more so than at Swindon).

The age of team, which Stanier served so well, is passing (at least on railways). But his training and subsequent period of executive power happened to fall in what is now recognised as an exciting time. There were great things to be done on railways, and it was people like Stanier who did them. He was recognised during his lifetime as one of the great mechanical engineers of the day. As time goes on his name will surely become more firmly identified with what after all, was a great period of experiment and development. Sir William Stanier was truly one of the "Giants of Steam ".