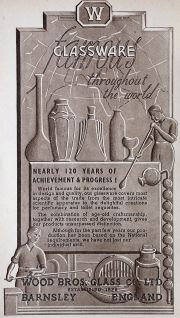 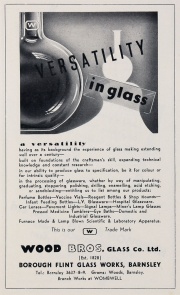 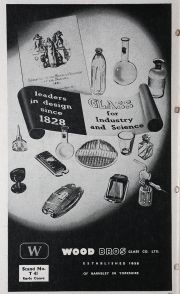 1828 A flint glasshouse was established at Worsbrough Bridge, by four men named Usherwood, Barron, Cartwright and Perkes. The works were situated by the canal, south of the road where it now crosses the railway. The area was known locally as Pretoria.

1834 The partnership changed when brothers John and James Wood arrived from Staffordshire to join Perkes. Richard Perkes was the glassmaker, James Wood the glasscutter and John Wood the manager, and all had worked in the Stourbridge glass industry. Their speciality was fine table glass, jugs, cruets, bottles and even lampshades - particularly flint glass cased with gold ruby glass with incised designs.

1851 Examples were exhibited in the Great Exhibition.

1854 Richard Perkes died and William Wood left the Baccarat glassworks in France to join his brothers. The business then became known as Wood Brothers.

1870 Another brother, Alphonse, who had also been at Bacarat, joined the partnership. He brought techniques of gilding and etching.

1871 An extension of the lease at Worsbrough Bridge was refused by the landlords.

1872 The firm bought land near Hoyle Mill, in Barnsley, and set up a furnace.

During the next three years, items made in Barnsley were sent to Worsbrough Bridge for finishing and decorating, until the Barnsley works was sufficiently expanded, able to accommodate all the work force and carry out all the processes.

1874 The Worsbrough Bridge works were closed.

c1900 A works branch was opened in Wombwell, with the main site at Pontefract Road in Barnsley, where the premises expanded and manufactured a wide variety of products, pressed and blown, domestic and industrial.

1914 After the declaration of war, making electric light bulbs in quantity.

1915 Extended the works; making glassware for scientific and laboratory uses. Built an extra furnace at Derby Crown Glass Co, which had been started in 1913 mainly for production of jars for potted meats, toilet cream and for malt[1].

1950s Although the site was completely demolished during the 1950s, the name is preserved in Glass-house Crossing.

1981 The business closed in February.