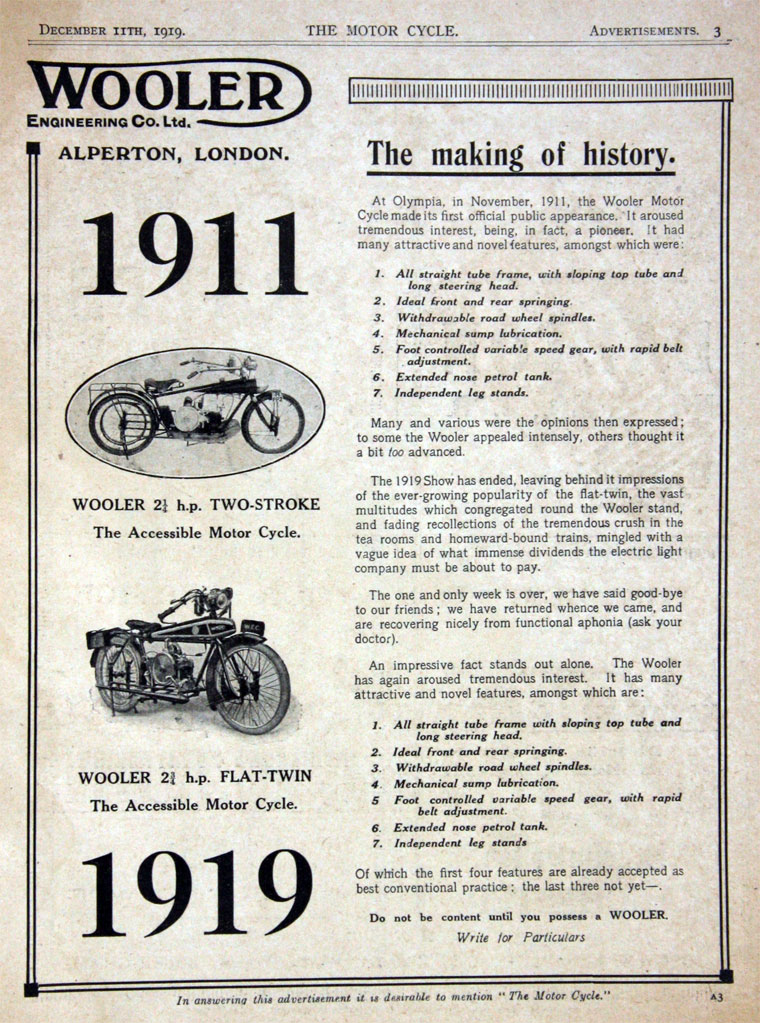 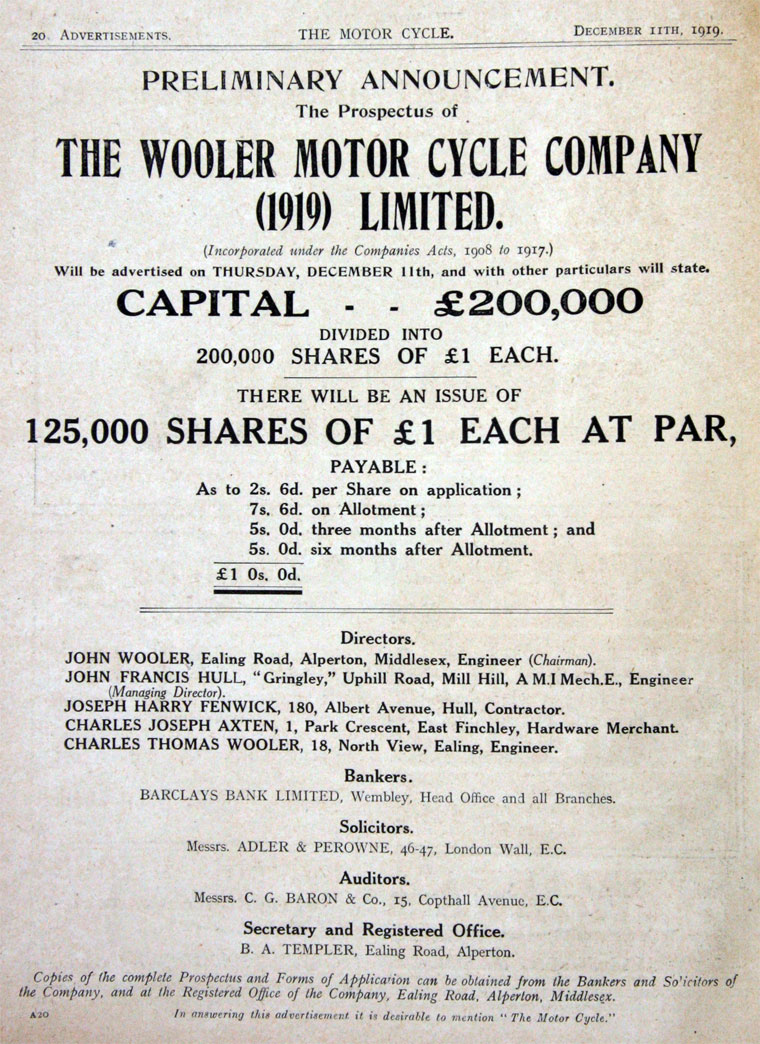 1911 The company was founded by Wooler. At the late Olympia show a machine was exhibited on the NYE stand. Although it was incomplete, it had features that would remain with the make for many years to come. The engine was a 2.75hp two-stroke with horizontal cylinder, but differed from the rest in that it had a double-ended piston coupled to external connecting rods by an extended gudgeon pin. An external pipe transferred the compressed mixture from rear to front chamber, where it was fired by a magneto on the crankcase. Drive was by belt via a variable pulley to the rear wheel. It had front and rear plunger springs and a patented 'anti-vibratory' frame. This was unusual in an age of girder and rigid forks. The fuel tank was shaped to a bullet head, tapering back to a point with the forward part around the headstock.

1912 The bike was made by Wilkinson, marketed as the Wilkinson-Wooler TMC and raised to 344cc.

1913 By late in the year the name was back to Wooler, with works in Harrow. The engine had pump lubrication, but the machine remained as before.

1919 Production resumed and the two-stroke was listed briefly, along with a new, advanced bike that had a 345cc flat-twin four-stroke engine with ioc valves and conventional build. It went into the same type of frame, having plunger suspension front and rear, while the petrol tank continued in the same form. It was entered in the TT, painted yellow and nicknamed the Flying Banana, but without success. The Wooler Mule cyclecar was announced in February 1919. It was powered by a 1022cc air-cooled twin with the cylinders protruding from the sides of the bonnet, and a circular dummy radiator. The engine used rotary valves. It had a double rear wheel giving the impression of a three-wheeler. No prices were published, but contemporary press reports suggested a price of around £130 which had increased to £185 by December. Only a few prototypes were ever built.

1920 The twin carried on into the new year and retained the variable pulley drive. The company was reformed as The Wooler Motor Cycle Company (1919) Ltd. and the Mule ceased production.

1921 Late in the year the transmission was changed to three-speed all-chain drive.

There then came a break in production as the company was re-financed and bought by William Dederich, a successful railway contractor.

The company, as the Dederich-Wooler Engineering Company, with John Wooler as Chief Designer and Engineer, then produced machines with both belt- and chain-drive.

1925 That system was also used by a new 499cc flat-twin. Business problems continued and production moved from Alperton to Twickenham, where Grigg Engineering undertook manufacture for a time.

1926 The twins were discontinued and a conventional looking 511cc vertical single with a type of overhead camshaft, three-speed Sturmey-Archer gearbox, rigid frame and girder forks was tried.

More re-designs followed with more innovations until 1930, when the Depression closed the company and the Wooler name dropped out of sight for some time.

1945 Wooler returned with a prototype 500cc transverse-four beam engine with the cylinders one on top of the other on each side. The pistons connected to the beam and this to the crankshaft set below the cylinder level. It had direct drive to a four-speed gearbox and shaft final drive. There was also talk of a variable gear and the whole unit went into a duplex frame, having twin plunger boxes on each side for front and rear suspension. The petrol tank again ran round the headstock and had a headlamp fitted in its nose.

1948-54 It was displayed at the Earls Court show in 1948 and again in 1951 and 1954. However, only half a dozen hand-built machines were ever made and the machine never materialized in production.

1956 The motorcycle marque disappeared after the founder John Wooler died.