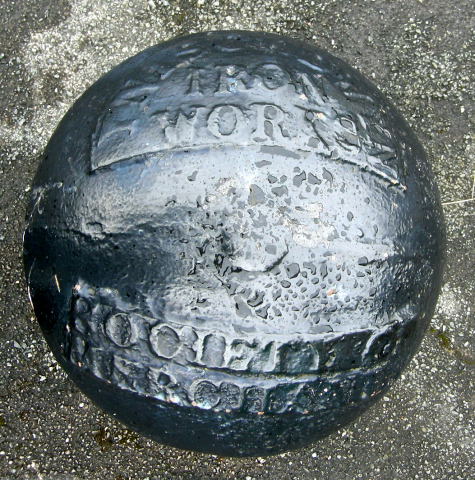 The remains of this building on the Ynyscedwyn site are not part of the original ironworks, but were built in 1872 as part of a planned steel mill, which was not completed. The site then housed the Ynyscedwyn Tinplate Works. The chimney base has an 1872 date stone

Established from a single charcoal furnace possibly built on the site c.1612.[1]The ironworks developed from a blast furnace built in 1696. There was a series of owners, but no great success until the works was taken over in the early 1820s by George Crane of Bromsgrove.

George Crane, and his works manager, David Thomas, successfully developed the use of anthracite for iron smelting in the 1830s. This required the use of hot blast for the furnace.

1836 The hot blast experiment at Ynyscedwyn enabled smelting with anthracite for the first time which led to the expansion of the Western Coalfield. These developments later resulted in the massive expansion of the iron industry in the USA, where anthracite was the principal coal available.

1837 There were three blast furnaces in production at Ynyscedwyn.

1849 The Practical Mechanic's Journal of April 1849 referred to a Mr. Detmold having put a gas furnace into successful service at Yniscedwyn.

David Thomas emigrated to the USA where he played a major role in perfecting and expanding the use of iron smelting using anthracite, which was main type of coal in the Pennsylvania and Ohio coalfields.

After Thomas left for the USA, his former assistant John Clee became superintendent and developed all three furnaces to use the hot-blast method, eventually keeping them in permanent blast.[3]

1889 A tinplate works of three mills was built on the ironworks site. It was operative for sixty years and its plant was finally dismantled in 1946 under the Tinplate Redundancy Scheme .

'On the Smelting of Iron with Anthracite Coal.' By G. Crane

The great extent of the deposit of anthracite (or stone coal) in the mineral basin of South Wales, accompanied as it is with iron mines in great abundance, and of good quality, has long made it an object of great interest to parties connected with that district to discover some method of applying that description of coal to smelting purposes.

One of the earliest patents enrolled in this country for this object was that of Mr. Martin, in 1804. From the mode detailed in his specification, there does not appear to have been any peculiarity in his process; he evidently expected to have succeeded in using this fuel by the only mode of blowing a furnace then known, that by cold blast. Another patent was taken out about twenty years afterwards, for a mode of forming a conglomerate coke, composed of the comminuted substance of the anthracite veins, locally called culm, mixed with a sufficient portion of the small coal of the ordinary bituminous or binding quality, to cement the whole, when coked, in an oven together. Had this latter plan been attended with success, its application would, of course, have been limited to those localities where the two descriptions of coal were to be found near each other.

The Ynyscedwin iron works, which are in Mr. Crane's possession, are placed upon the anthracite formation. Until he discovered the method of applying this particular description of fuel to the smelting of iron ore, he was obliged to employ the coal of the bituminous veins, obtained from the adjoining parish of Kilybebyll, for the supply of the blast furnaces at Ynyscedwin.

During the fourteen years in which Mr. Crane has been engaged in the iron trade of South Wales, he has had his attention anxiously directed to the application of anthracite coal to smelting purposes, and had at different periods, at a large outlay, tried a variety of plans, but without success, until the idea occurred to him, that a hot or heated blast, upon the principle of Mr. Neilson's patent, might, by its greater power, enable him to complete the combustion of this very peculiar coal. By this means he has completely succeeded in the application of anthracite coal to the smelting of ironstone and ore ; — having used no other fuel in a cupola blast furnace since the 7th February, 1837 ; and the success of the experiment in the combination of hot or heated air with the coal in question, has been, in every respect, of so satisfactory a description, whether with regard to the quantity of the iron produced, the quality of such iron, or the economy of the process, that he is now actively engaged in making the necessary preparations for the introduction of anthracite coal, instead of the coke of the bituminous veins, upon the whole of the blast furnaces (three in number) at the Ynyscedwin iron works ; he has renewed all his mineral takings in the anthracite part of the basin for ninety-nine years, and contemplates arrangements for a large extension of the works.

Mr. Crane observes : " One of the three furnaces at present on the establishment is a small cupola furnace, which we call No. 2, built from the top of the hearth with firebricks only. This cupola is of the following dimensions : — 41 feet in its whole height, 10½ feet across the boshes, and the walls of the thickness of two 9-inch bricks ; the earth 3 feet 6 inches square, and 5 feet deep. The two other furnaces, which we call No. 1 and No. 3, are thick stone-walled furnaces. Some years since I found that the cupola furnace, No. 2, had, on the average of a long period, (I concluded from the smallness of its dimensions, and the thinness of its walls,) taken so large an excess of minerals to the ton of iron produced, when compared with the quantity taken on the average of the same period by the stone-walled furnace, No. 1, standing within fifty feet of it, that I determined to erect a second furnace similar to the latter one, in lieu of it. This cupola furnace, No. 2, not being at work when I arrived at the determination to try the experiment of the combination of hot blast and anthracite coal upon the large scale, it was more convenient to put this furnace into blast for the purpose, rather than to interfere with the usual progress of my business by experimentalizing in either of the two other furnaces.

" The cupola furnace, No. 2, from the causes which I have before explained, had, on the average of a long period, taken cokes the produce of 5 tons 3 cwt. of coal to the ton of pig iron, when the stone-walled furnaces had not required cokes to the ton of metal produced quite equal to four tons of coal. The consumption of ironstone and limestone had been greater in the former than in the latter description of furnace, but not in so large a proportion. " I will make one other explanatory remark on this part of the subject. The two descriptions of furnaces have worked in so different a manner with the minerals of my neighbourhood, that, whilst the barrow of cokes, weighing about 3½ cwt., would take, when consumed in either of the stone-walled furnaces, a charge or burden of 5 to 5½ cwt. of calcined iron mine of the descriptions obtained in my neighbourhood, according to the kind of iron which I was desirous of producing, the same barrow of cokes in the No. 2 cupola, or thin-walled furnace, would only carry from 3 to 3½ cwt. of calcined mine of the same kinds. Under these disadvantageous circumstances, I have actually produced from the No. 2 cupola furnace the ton of iron in the smelting process, on the average of three months, with less than 27 cwt. of anthracite coal. The heating of the blast and the calcination of the mine require, of course, upon my plan, the same quantity of fuel which is necessary for the like processes in other establishments.

With regard to the quantity of iron produced, the result which I have to report is equally satisfactory. I must not, however, omit to mention, that, for the greater convenience of filling this cupola furnace, No. 2, from an adjacent gallery, previous to the commencement of my anthracite experiment, I raised it in height from 36 feet 6 inches to 41 feet. This might have had some effect upon reducing the excess of the consumption of fuel when compared with that which had taken place in the No. 1, and might have increased its power of smelting with my blast of a l¼ lb. upon the square inch pressure only, from its former average of 22 tons to 24. Since I have adopted the use of anthracite coal, combined with hot air, the produce of No. 2 cupola furnace, with the same pressure of blast only, has ranged from 30 to 34 and 36 tons, and one week we actually tapped within 3 cwt. of 39 tons of grey iron from this furnace. Its present weekly average may be expected to range from 35 to 36 tons.

" With respect to the quality of the iron produced by the combination of hot blast and anthracite coal, the result is very satisfactory. It is well known in my neighbourhood, that my cold blast iron, for all purposes where great strength was required, was never deemed inferior to any smelted in South Wales. That which I have hitherto produced with hot blast and anthracite coal is, however, decidedly stronger than any other before smelted at the Ynyscedwin iron-works."

The anthracite formation probably occupies about one-third of the mineral basin of South Wales. It commences near the upper part of the Vale of Neath, in the county of Glamorgan, and proceeds in a westwardly direction through the remainder of that county; thence through Carmarthenshire, and crops out in the sea in St. Bride's Bay, after passing through a considerable portion of the county of Pembroke. It is likewise to be found in Ireland, Scotland, France, Austria, Bohemia, and Sardinia, and very large deposits of it have been already discovered on the continent of America, particularly in the state of Pennsylvania. [5]