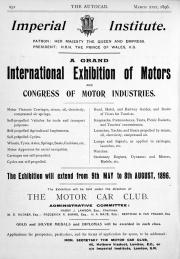 Held at the Imperial Institute, London from 9th May to 8th August 1896.

The exhibition of horseless carriages, brought together by the Motor Car Club, though the number of exhibits is not large, is sufficient to show that the manufacture of these vehicles is now passing out of the experimental stage. It shows, further, that the purchaser of the near future will have to choose between oil and electricity as a source of power.

Electricity has the advantage that it works without smell and with less noise and vibration, but the disadvantage of the costliness of the accumulators, and the impossibility of recharging except where the electric supply is available. Carriages made and exhibited by the Universal Electric Carriage Syndicate, Victoria Street, S.W., can, it is stated, run thirty-five or forty miles at eight miles an hour without recharging, an operation which takes about three hours. Messrs. Offord and Son, of Gloucester Road, S.W., also showed an electric carriage made as an experiment, and sufficiently encouraging to warrant further practical trial.

The objections to the carriages driven by oil motors have been indicated above, but they have the immense advantage that their fuel can be obtained easily. The Arnold Motor Carriage Co, Mark Lane, E.C., showed a very workmanlike carriage, which was easily steered and stopped, and did not give out much smell. Its price is stated to be “about £125.” The fuel used is benzoline, of which it can carry enough to travel seventy miles at the cost of a halfpenny a mile. The benzoline is lighted by an electric spark.

A number of practical vehicles are shown also by the Daimler Motor Co – phaetons, a private omnibus, and a tramcar, among others. The fuel is oil.

Messrs. Hollier, Gascoyne and Co, of Maidstone and Birmingham, exhibit an oil machine known as Rogers Express Autocar; and Messrs. New and Mayne, of Westminster, a Hildebrand oil motor bicycle, an apparatus in which the art of packing a great deal of complicated machinery into a small space appears to have been carried to great perfection.

Steam carriages of two patterns are shown: the Serpollet, already described in these columns, which has, when compared with the old motors, a rather clumsy appearance; and a steam tricycle, shown by the British Motor Syndicate, Holborn Viaduct, in which the fuel is methylated spirit. The interest if not the utility of the exhibition is increased by the display of certain flying machines. Mr. Maxim shows a model of his steam flying machine, on of the actual engines, and one of the screw propellers. Herr Lilienthal’s flying, or rather gliding or soaring, machine, is exhibited, as also a similar apparatus invented by Mr. P. S. Pilcher.

Mr. H. Midleton shows a flying machine, in which the lifting power is obtained by two small balloons.

The exhibition will remain open for some time, and the visitor can make trial of some of the motor cars, which are manoeuvred on the ground.