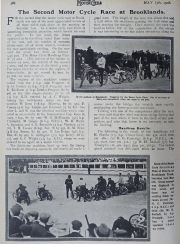 1908 May 9th. Saturday. Held at Brooklands. The second motorcycle race at the track.

The Second Motorcycle Race at Brooklands[1]

FOR the second time the motor cycle race at Brooklands was one of the most appreciated events of all those which took place at the meeting on Saturday last. In a motor cycle race there is something irresistibly attractive., which keenly interests the public. To our mind, the riders appeared to be travelling faster than many of the cars, and the number of entrants (thirty-one), all of whom started, rendered the race particularly exciting.

On the race card the event was down as follows - 3.45 p.m. The Motor Cycle Handicap Plate of 25 sovs. (The entrant of the winner to receive 15 sovs., the entrant of the second 7 sovs., and the entrant of the third 3 sovs.) For motor bicycles of which the engines, if twin-cylinder, do not exceed 85 mm. by 95 mm. for each cylinder.

The thirty-one machines lined up near the timing box made an imposing spectacle, and nearly all made a good start. The length of the race was about five and a half miles, the machines passing the fork once and then entering the straight. Once started the race was hard to follow, but at the completion of the circuit it was interesting to see the riders streaming along the course under the bridge, the scratch men rapidly overhauling the lower-powered machines.

Talking with one of the competitors after the rat we were told that the wind was most trying during tb part of the race where it blew in the teeth of the competitors, and also that there is no necessity to ta the banking.

The following is the result of the handicap:

The fasest speed attained was fifty-eight miles an hour.

The 2.75 h.p. Chater-Lea was a particularly neat racing machine, being well designed, light, and efficient, while the N.S.U. ridden by Partridge was the identical roadster machine he rode in the last quarterly trials.

The following came next in order (after each machine the amount of handicap is given):

Among the unfortunates were Wells, who punctured; A. Mayer (7 h.p. Buchet), whose belt came off; A. C. Wright, whose number plate fell off, caught in his front wheel, and threw him; and H. P. Beasley (5 h.p. Rex), trouble with crankshaft bearing.

The weather was gloriously fine, and a good number of spectators were present. The following officials assisted at the motor cycle race: Mr. A. V. Ebblewhite, circuit counter and starter; Mr. F. Straight, handicapper; while among the members of the A.C.U. committee there were to be seen Messrs. H. P. E. Harding, H. G. Cove, and E. M. P. Boileau.