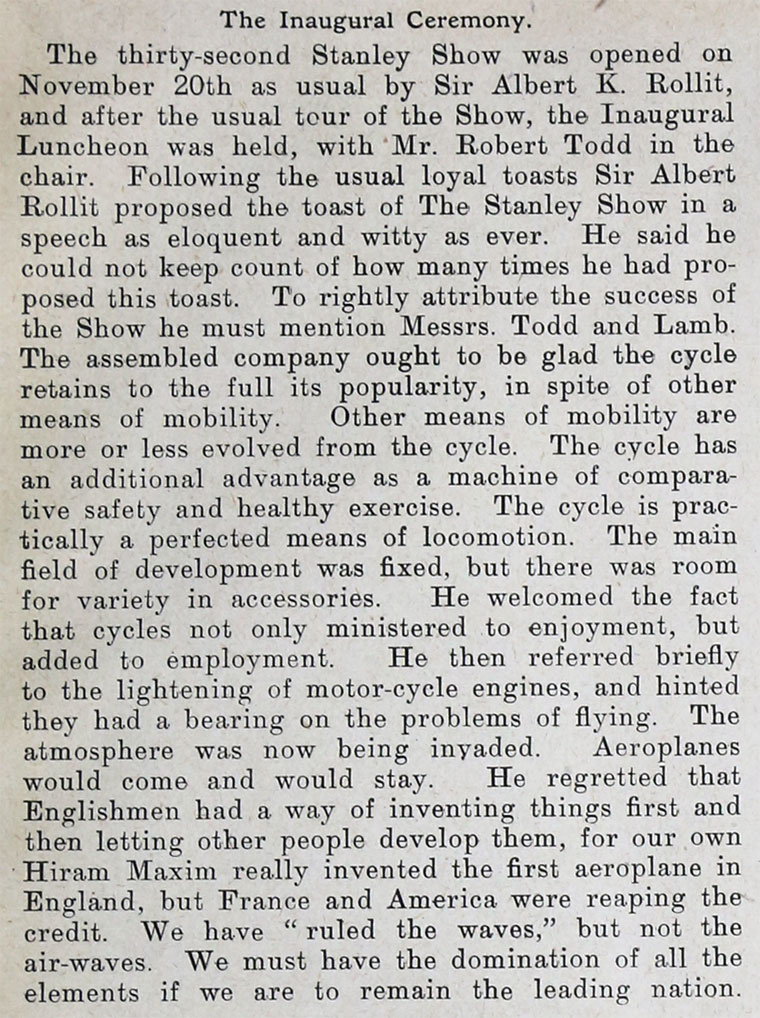 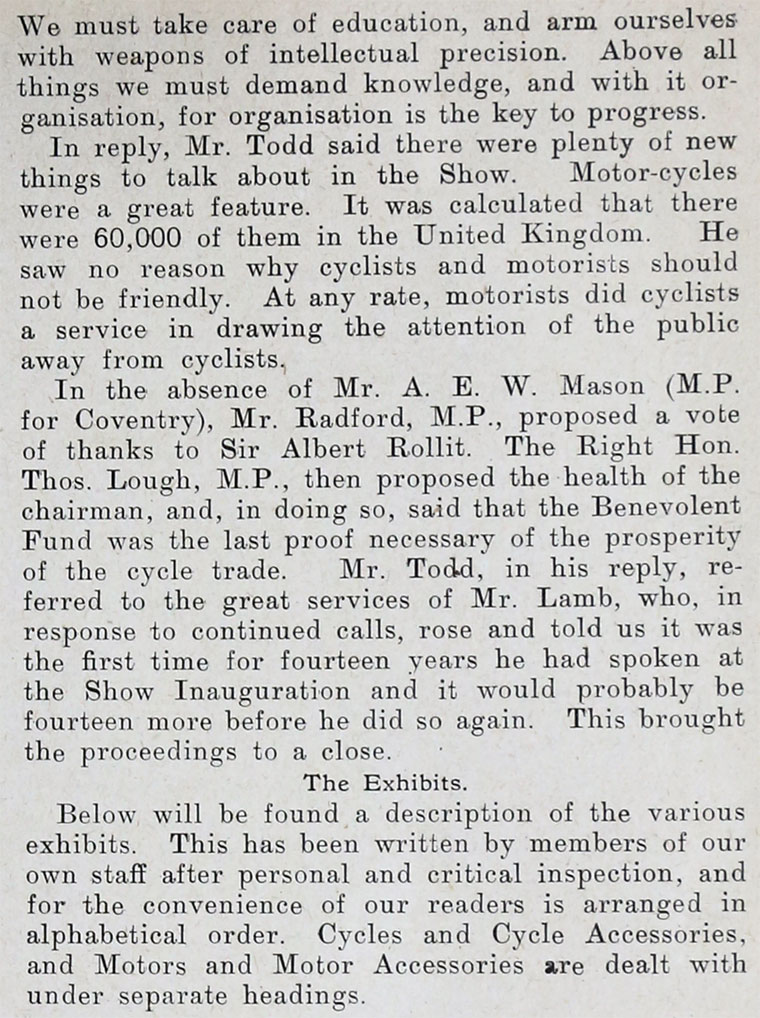 Note: This is a sub-section of the Stanley Show

The thirty-second Stanley Show was opened on November 20th as usual by Sir Albert K. Rollit, and after the usual tour of the Show, the Inaugural Luncheon was held, with Mr. Robert Todd in the chair.

Following the usual loyal toasts Sir Albert Rollit proposed the toast of The Stanley Show in a speech as eloquent and witty as ever. He said he could not keep count of how many times he had proposed this toast. To rightly attribute the success of the Show he must mention Messrs. Todd and Lamb. The assembled company ought to be glad the cycle retains to the full its popularity, in spite of other means of mobility. Other means of mobility are more or less evolved from the cycle.

The cycle has an additional advantage as a machine of comparative safety and healthy exercise. The cycle is practically a perfected means of locomotion. The main field of development was fixed, but there was room for variety in accessories. He welcomed the fact that cycles not only ministered to enjoyment, but added to employment. He then referred briefly to the lightening of motor-cycle engines, and hinted they had a bearing on the problems of flying. The atmosphere was now being invaded. Aeroplanes would come and would stay.

He regretted that Englishmen had a way of inventing things first and then letting other people develop them, for our own Hiram Maxim really invented the first aeroplane in England, but France and America were reaping the credit. We have "ruled the waves," but not the air-waves. We must have the domination of all the elements if we are to remain the leading nation.

We must take care of education, and arm ourselves with weapons of intellectual precision. Above all things we must demand knowledge, and with it organisation, for organisation is the key to progress.

In reply, Mr. Todd said there were plenty of new things to talk about in the Show. Motor-cycles were a great feature. It was calculated that there were 60,000 of them in the United Kingdom. He saw no reason why cyclists and motorists should not be friendly. At any rate, motorists did cyclists a service in drawing the attention of the public away from cyclists.

In the absence of Mr. A. E. W. Mason (M.P. for Coventry), Mr. Radford, M.P., proposed a vote of thanks to Sir Albert Rollit. The Right Hon. Thos. Lough, M.P., then proposed the health of the chairman, and, in doing so, said that the Benevolent Fund was the last proof necessary of the prosperity of the cycle trade. Mr. Todd, in his reply, referred to the great services of Mr. Lamb, who, in response to continued calls, rose and told us it was the first time for fourteen years he had spoken at the Show Inauguration and it would probably be fourteen more before he did so again. This brought the proceedings to a close.

The Exhibits. Below will be found a description of the various exhibits. This has been written by members of our own staff after personal and critical inspection, and for the convenience of our readers is arranged in alphabetical order. Cycles and Cycle Accessories, and Motors and Motor Accessories are dealt with under separate headings.