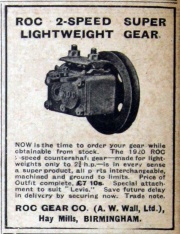 A. W. Wall Ltd of Guildford and later of Roc Motor Works, Hay Mills, Birmingham was a motorcycle manufacturer

The Wall Tricar was manufactured in Tyseley from 1911.

Manufacturers of the Roc motorcycle, they experimented with a number of unorthodox designs and were financed by Sir Arthur Conan Doyle, famous for writing Sherlock Holmes novels.

The Wall Tricar had a sidecar type body that was mounted onto a 3-wheeled chassis and used tiller steering though in 1914 this was replaced by a more conventional steering wheel. The Tricar was powered by either a 4.5 hp or 6 hp Precision engine that was used in the company's motorcycles. Manufacture of the Tricar ceased in 1915.

1913 Exhibitor. 'The most striking parcelcar exhibit is staged on Stand 143 occupied by this well-known Midland manufacturer. Reference to the illustration will no doubt bear out our remarks. The equipment has been constructed to the order or W. H. King, Ltd., of Euston. A roomy box van type of body is mounted, and a canopy provides ample protection for the driver. The outfit is capable of carrying loads up to six cwt. An 8 h.p. Precision twin air-cooled "Vee" engine provides the motive power, and this is situated under the front scuttle of the body. There is a double reduction in the transmission, the first taking place in an epicyclic gear bolted direct to the. crankcase, the final reduction by bevel being enclosed in the differential ease of the back axle. There are examples of transmission and other component parts shown on this stand which, on inspection, will give evidence of the high-class design and workmanship incorporated in Wall productions. This maker is catering for every branch of the parcelcar industry, and we noticed a special type of body, particularly suitable for bakers and confectioners, and which is provided with special forms of louvres to give the necessary ventilation when carrying bread arid confectionery straight from the bakers' ovens. A feature worth mentioning is that the main exhaust pipe is carried well to the rear of the chassis, so that it is impossible for products of combustion to contaminate the goods carried. An order-book rack is fitted in a convenient position in the front of the driver, which gave evidence of attention to little details, particularly of advantage to any tradesman's driver. The price of Wall parcelcars is £87 10s. fitted with single-cylinder engine, and the twin cylinder type of £94 17s.[1]

1913 October. Agents for the parcelcar in London and area were Sydney Westall and Co and for Hampshire was Parsons and Kemeall.[2]

1921 The Coulson company folded, but later that year the marque moved to A. W. Wall Ltd of Birmingham, where Blackburne, JAP engines and a Wall-built 269cc Liberty two-stroke unit were used in the motorcycle.

1923 Mentioned. '...A. W. Wall Limited, having its registered office at King's road, Tyseley, Birmingham, in the county of Warwick, General Engineers,...'[4]

Wall was a motorcycle produced between 1903 and 1904 by A. W. Wall of Guildford, Surrey, to his own design.

The frame was extended and lowered with a bolted-in tube running below the top tube to support the tanks, which were grooved to fit to both. A 2.75hp engine with magneto ignition was fitted and the drive pulley incorporated a clutch. Both seat and handlebars were set well back in the style of a pacing machine and, in 1904, the make became the Roc. He was also involved with the Auto Wheel and numerous other ideas and designs in the formative years of the industry.

Roc were motorcycles produced from 1904 to 1914 by A. W. Wall, who was partly fianced by Sir Arthur Conan Doyle. They started out in Guildford, Surrey, before moving to Birmingham.

1904 The Roc had a 3hp engine, free-engine clutch and magneto ignition.

1905 The engine was fitted with an outside flywheel on each side. Although it did not race, a vertical twin-cylinder engine was tried out at the Isle of Man Auto Cycle Cup event by T. H. Tessier.

1905 Henry Percival Rose, 10 Pewley Hill, Guildford, Surrey registered a number of these machines so my have been connected with the company

1906 The machine was listed as having a 792cc engine with automatic inlet and mounted in a spring frame.

1908 The new model for that year was the 4hp Royal Military, with a long wheelbase, live rear-axle with clutch and two-speed gear, all in the rear hub. The hub was offered to other makes as a conversion and was well received.

1909 A new front-fork using C-springs appeared and engines were a 4hp single and a 5-6hp twin. The range was extended and the Wall Auto Wheel first appeared. Roc added aTourist model with a 515cc four-cylinder engine and pressed-steel frame. A model was also listed with the 4hp single engine.

1910 The firm made its move to Aston Road, in Birmingham.

1911 Two models were advertised under the A. W. Wall name. The first was a single with a two-stroke engine, shaft drive, worm gear, two-speeds, pressed-steel frame, C-spring front suspension and a well-sprung bucket seat. The other was a tricycle with twin rear wheels and body-work that carried the rider and also enclosed all the mechanical parts. Its engine had a rotary inlet-valve, with single or twin four-strokes as options.

1912 The model was a 5hp tricycle fitted with a Roc two-speed gear.

1914 Precision engines of 2.75hp and 4.25hp were fitted, the larger of which drove a four-speed gearbox. They also listed a 6hp model fitted with a three-speed gearbox with chain drive.

A. W. Wall's attempts at the Auto Wheels, reported in Motor Cycling, was shown on stand number 88 at the Stanley Show.

The horizontal engine of 1.5" bore and 2" stroke was an air-cooled, two-stroke, flat twin; only one cylinder fired; the other, by way of a long truncated piston, pumped the charge into the working cylinder. The hub contained a flywheel and 6:1 reduction gears. The mudguard was the oil and petrol tank.