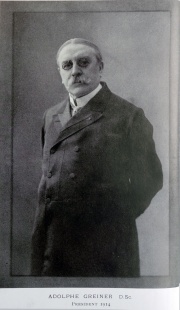 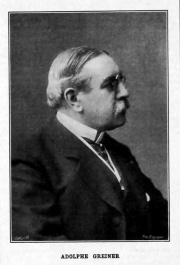 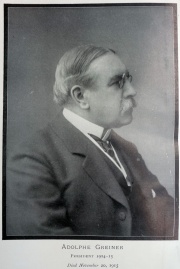 ADOLPHE GREINER, D.Sc., Director-General of the John Cockerill Company, and President of the Iron and Steel Institute, died at his residence near Liege on November 20, 1915.

Dr. Greiner was born in Brussels in 1843, and was the eldest son of Monsieur Gustave Greiner, Private Secretary to King Leopold, the first King of the Belgians. He was educated at the University of Liege, and in 1864 he obtained the Diploma of the School of Mines at that University. Immediately afterwards he obtained the appointment of Engineer-Chemist to the Societe Anonyme John Cockerill, which was the first steel-manufacturing company on the Continent to adopt the Bessemer process. That was in the year 1862, but, owing to certain technical difficulties, the process for some time failed to work satisfactorily, and the steelworks were shut down for several months.

In 1864 Mr. George Pastor, son of the Director-General of the Company, took over the management on the condition that he should have the assistance and co-operation of Adolphe Greiner. The result was a triumphant vindication of the foresight of the younger Pastor and of the ability and skill of Greiner, for within a fortnight the steelworks were again in operation, and at the end of the following half-year they showed a profit for the first time.

In 1869 Mr. Greiner was appointed manager of the steelworks.

He was responsible for the introduction of the basic process for steelmaking, and was one of the earliest promoters of the use of blast-furnace and coke-oven gas for the direct driving of internal combustion engines.

During the following years the successes he had achieved drew considerable attention to his abilities, and he received several tempting offers to leave Seraing in order to take up similar positions in other countries; but his attachment to the Cockerill Works was strong, and he determined to remain, his loyalty being rewarded in the year 1887, when, on the resignation by Baron Sadoine of the office of Director-General, he was invited to accept that position.

He was one of the most distinguished figures in the industrial life of Belgium, and his genius gained for him a world-wide reputation.

Numerous honours were conferred upon him during his long career by his own Sovereign and those of other countries. He had been President of the Comptoir des Acieries Belges, as well as of all the leading scientific Belgian societies, and as President of the Central Committee of Industrial Labour he rendered important services to the social welfare of Belgium. He also played an important part in the development of the iron and steel industry of other countries.

Mr. Greiner was a founder and Vice-President (until the time of his death) of the Dnieprovienne Iron and Steel Works, Kamenskoie, Russia, which was established about the beginning of the eighties, and is now one of the most flourishing and up-to-date iron and steel works in that country. Another important undertaking which he assisted in establishing was the Company of the " Altos Hornos de Vizcaya," at Bilbao, and he was also one of the promoters of the Hanyang Iron and Steel Works in China.

He was a man of large mind and wide sympathies, and towards the members of his staff and the thousands of operatives employed at his works he occupied a kind of patriarchal position, and was ever ready to help any one of them, from the highest to the lowest, with his advice or benevolent assistance.

Mr. Greiner was elected President of the Iron and Steel Institute in May 1914, having been for many years a Member of Council and Vice-President. He first joined the Institute in 1876, and was a frequent attendant at its meetings. Several important papers were contributed by him to the Proceedings. He often took part in the discussions of papers, and was always eagerly listened to on account of his wide practical knowledge and experience. The Institute manifested its appreciation of his talents in awarding to him the Bessemer Gold Medal in 1913. In the autumn of that year the Institute held a meeting at Brussels, Mr. Greiner being Chairman of the Reception Committee, and making himself responsible for the whole of the arrangements, and during the meeting a large party of the members was most hospitably entertained by him at the works of the Cockerill Company at Seraing. A similar visit was paid in 1894, and on that occasion also Mr. Greiner was a member of the Belgian Reception Committee, and gave an entertainment at the works of his company, which he had invited the members to inspect.

At the Leeds Meeting of the Institute in 1912, the University of Leeds conferred upon him the honorary degree of Doctor of Science.

During the siege of Liege in August 1914 Mr. Greiner remained at his post, continually encouraging, with his unfailing spirit, the members of his staff and his workmen, and organising means for the alleviation of the distress of the large population dependent on his company for employment. In the following months, he set on foot experiments in the heating of open-hearth furnaces by means of tar in order to overcome the difficulty of the shortage of gas coal. The results of his experiment were presented to the Institute in the form of a short paper in May 1915, and this last contribution to the Iron and Steel Institute will remain as a record of his courage and resource in the midst of his difficulties and adversities at the time when the industries of Belgium were paralysed and ruined by the German invaders.

ADOLPHE GREINER, D.Sc., President of the Institute and Managing Director of the Socidte John Cockerill, died at his residence at Seraing, Belgium, on November 20, 1915. A biographical note of his life and career will be found in the preliminary pages of this volume.