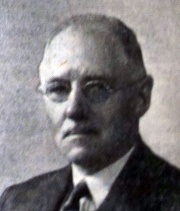 "ALFRED THOMAS JOHN KERSEY was elected an Associate Member in 1900 and a Member in 1923. As a Member of the Institution of Automobile Engineers since 1911 he played an active and useful part in the affairs of that Institution, firstly in connection with its examinations and secondly in connection with its Repair Certificate Scheme. He was also responsible for many of the reviews which appeared in the I.A.E. Journal. Born in 1875 he received his technical training at Portsmouth Dockyard and, in addition to a Whitworth Exhibition, he secured a three-year National Scholarship to the Royal College of Science, where he obtained his Associateship. He was then appointed chief lecturer in engineering at Swindon and North Wilts Technical School and subsequently head of the engineering department at Crawford Technical Institute, Cork. His next appointment was as head of the civil and mechanical department at Halifax Technical College and from there he became head of the engineering department at Hull Technical College.

Finally, he was appointed head of the mechanical engineering department at Salford Royal Technical College, where some of his best work was done. After his retirement from that post and during the 1939-45 war he undertook special duties in the engineering department of King's College, London, thereby effectively crowning a long, honourable, and distinguished career in the cause of engineering tuition at the highest level. He was greatly distressed in 1932 by the death of his only son who was a Graduate Member of the Institution. From 1926 to 1930 inclusive Mr. Kersey served on the Committee of the North Western Branch of the Institution. He was the author of many technical papers and joint author of a well-known and standard text-book entitled "Theory of Machines". He died on 5th October 1951 at the age of seventy-six. Louis Toft."