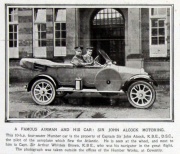 Arthur Whitten Brown was born in Glasgow to American parents and was therefore an American citizen by birth. His father was part of an investigation into the siting of a Westinghouse factory on Clydeside, and was therefore based in the Scottish city at the time. In the event, the factory was sited in Trafford Park, Manchester and this brought the family to Lancashire.

Brown began his career in engineering before the outbreak of the First World War and undertook an apprenticeship with British Westinghouse in Manchester.

In 1914, he enlisted in the ranks of the University and Public Schools Brigade for which he had to take out British citizenship. The ranks of the UPS were full of potential officers and Brown was one of those who sought a commission to become a Second Lieutenant in the 3rd (Special Reserve) Battalion of the Manchester Regiment. After service in France, Brown was seconded to 2 Squadron RFC as an observer.

Brown's aircraft was shot down by anti-aircraft fire over Vendin le Vielle while on artillery observation duties. He was sent back to England to recuperate but returned only to be shot down again, this time with a punctured fuel tank, near Bapaume in BE2c 2673 on a reconnaissance flight on 10 November 1915. Brown and his pilot, 2nd Lt. H.W. Medlicott, were captured by the Germans. (In June 1918 Medlicott was shot by the Germans while attempting to escape for the fourteenth time). Later interned in Switzerland, Brown was repatriated in September 1917.

After a period of leave he went to work with Major Kennedy RAF in the Ministry of Munitions. This led Brown to meet Kennedy's daughters, one of whom he later married. After the war Brown sought various appointments that would give him the security to allow him to marry. One of the firms he approached was Vickers, a consequence of which was that he was asked if he would be the navigator for the proposed transatlantic flight, partnering John Alcock, who had already been chosen as pilot.

The flight from St. John's, Newfoundland to Clifden, Connemara, Ireland took place on 14 June 1919. They departed St John's at 1.45 p.m. local time, and landed in Derrygimla bog 16 hours and 12 minutes later after flying 1980 miles. The flight was made in a modified Vickers Vimy bomber, and won a £10,000 prize offered by London's Daily Mail newspaper for the first non-stop flight across the Atlantic. Both he and Alcock were knighted for this achievement.

During the Second World War Brown served in the Home Guard as a Lieutenant-Colonel before resigning his commission in July 1941, rejoining the RAF and working in Training Command dealing with navigation. His health deteriorated and by mid-1943 he had to give up RAFVR and ATC commitments on medical advice.

Brown's only son, Arthur (known as Buster), was killed on the night of 5/6 June 1944, aged 22, while serving with the RAF as a Flight Lieutenant. His aircraft, a De Havilland Mosquito VI 'NT122', 605 Squadron, crashed in Holland. Buster was buried at Hoorn general cemetery. The death of his only son affected Brown badly.

By 1948 Brown’s health was again deteriorated, although he was allowed to undertake restricted duties as general manager for Metropolitan-Vickers at the Wind Street offices.