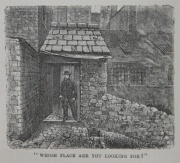 "Whose place are you looking for?"

The Launch of the Great Eastern

CHAPTER IV. WE GO INTO BUSINESS.

UP to this time my small business, although carried on for the benefit of the brotherhood, was conducted entirely by myself, and was confined to selling goods of other people's manufacture; we now determined to make another venture, and to try manufacturing on a small scale. When the Empress Catharine of Russia visited the famous Soho Works, she asked Matthew Boulton what they made there, and was answered, "We make what monarchs are very fond of - power!" It is generally known that there are in Birmingham a multitude of minor industries, numbers of which are too small to require engines and boilers of their own. Consequently, factories have been built and let out in portions; the proprietors providing engines to drive their tenants' machinery, and "selling" them the power; and so we determined to hire such a workshop. My brother Joseph, who worked at the lathe, besides being an able designer of new tools, was an exceptionally clever artisan, and his lathe was a first-class tool. We hoped, therefore, to obtain some good work to keep both employed. Accordingly we engaged a portion of a manufacturer's packing-room into which a revolving shaft projected, from which we drove the lathe, and for this accommodation we paid a rent of 4s. per week. Here I set up my first office, partitioning off a space 4 ft. square, the walls being formed of brown paper stretched upon a wooden framing. The adjoining room was occupied by Mr. Alderman Cook, who became M.P. for East Birmingham, but who was then beginning life in a similar way to our own.

My other two brothers still remained with our old employer, who also, for some time, provided us with work for the lathe. More work came and at length we all decided to start together on our own account. Before coming to Birmingham my brothers were engaged in a safety-fuse factory in Cornwall, for which they had devised and made the machinery and we thought that with some modifications the same kind of machinery would be suitable for making cordage and small ropes, and they proceeded to make experiments but failure succeeded failure until our money was almost gone. My brothers were almost in despair; but just at this juncture an old schoolfellow of mine, who was aware of my brothers' genius for mechanics, proved to be a veritable friend in need. It was during the Russian War, and his employer held a contract from the Government for the supply of lint; but he was in great difficulties about it because he could not get it made fast enough, and so he came to us and asked us to make, some machines for its manufacture.

We had no knowledge how lint was made; but after carefully examining a sample which the contractor produced, my brother undertook the commission. In due course a machine was constructed, but its action was most provoking, for it would make an inch or two of excellent lint, and then without any apparent cause would cut the fabric through and spoil all. Again my brother was in despair; but I encouraged him by reminding him that he had produced a machine which was nearly perfect, although he had never seen the process before.

While we were in this state, our customer came in and inspected the sample we had made, and pronounced it to be very good; "only," he said, "these cuts won't do, but I see how they have come about, you have got the wrong sort of material," and off he went, returning soon with the right kind, which was quickly fixed, and the machine at once became a success. We had now no doubt that our true vocation was that of machine makers.

While my brothers were engaged together in Cornwall, they came under the notice of Brunel, who admired a hydraulic press they had made for covering safety-fuse with gutta percha, and now they were destined to do some important work for that great engineer. The Great Eastern steamship had to be launched, and powerful machinery had to be designed to effect that purpose. My brother had invented a new hydraulic lifting jack, which was just the thing that was required. One dark evening in the winter of 1856, Brunel's agent came to our little workshop, which was down an entry behind a baker's shop (the baker's oven saving us the expense of heating our workshop}, and rang the bell. I opened the door; but the gentleman apologised, saying he had made a mistake, and was moving away; but I could not afford to lose a possible chance of business, and so said, "Whose place are you looking for, sir?"

He replied "Tangye's." I told him he had come to the right place, and invited him in, when, having told us his business, he was quickly re-assured upon seeing one of the machines before him. He ordered several of them; but my brother told him they would not be sufficient to effect the launch, with which opinion he did not agree.

As the Great Eastern, which was for some time called the Leviathan, exceeded all other ships in size, so did she exceed to a far greater extent every other vessel which had been made up to that time both in the cost as well as in the time occupied in launching her. Owing to her great length it was impossible to launch her in the ordinary way, and she had therefore to be lowered to the water broadside on. This was not entirely a new method, as it had already been adopted in America, and still earlier in China. The vessel was carried on two timber cradles, one for each end of the ship, which were to slide on rails supported on heavy timbers, resting on a number of piles driven into the bed of the river. The rails were placed at an incline of about one in twelve. In order to start the ship sliding down on the rails, two hydraulic presses were employed, one to each cradle; one having a 10 in. diameter ram capable of exerting a pressure of 100 tons; the other having a 12 in. ram equal to 150 tons.

Mr. Brunel anticipated that he would have to use great precautions to prevent the ship running down the incline too rapidly into the water; and for preventing any such rapid movement he had attached a massive iron cable at each end, which cable was wound round a large drum fitted with a powerful brake so as to act as an efficient check. Whether it was from any error in calculation, or whether from unexpected sinking of some of the rails, so producing a very irregular bed with greatly increased friction, or from some other cause, it was found to be much harder work to start the ship than to stop her. The first attempt at launching was made on November 3rd, 1857, in the presence of a large company who hoped to see the huge vessel steadily and gracefully enter the water. A sudden movement of about 3 ft. causing the death of a man and a sudden stop, proved a great disappointment to all, and closed the efforts for that day.

Then followed for the next three months a long series of attempts; one after another hydraulic jacks were added; and one after another they burst with the excessive pressure put upon them. Some days showed the advance of several feet, others not as many inches; Brunel at last realising that it required about as many thousands of tons to move the load as he had originally provided hundreds. Finally, the number of jacks being increased to about 10 or 12 to each cradle, instead of one as originally tried, on Sunday the 31st of January, 1858, the ship completed its journey to the water, and was floated by the next tide. This order for hydraulic jacks proved to be the real foundation of our business; and I have often said that "we launched the Great Eastern, and she launched us." The cost of the launch was stated to be considerably over £70,000. The original estimate for the cost of the ship was about £500,000; but the actual cost was said to have exceeded £800,000. In 1887 she was sold for £25,500, and in 1888 could not find a purchaser at £10,000.

The above figures show how unfortunate the ship has been as an investment. She crossed the Atlantic several times with passengers, but these voyages did not prove financially successful. In 1860 her paddles were carried away in a storm; while three years later she ran on a rock on the American Coast, having made a hole in her bottom eighty feet long. She was the first vessel to lay a successful Atlantic cable, and in such work she was employed on several occasions afterwards; she also laid the Indian cable from Bombay to Aden. In 1878 she was cleaned on a gridiron and repaired, 300 tons of mussels being removed from her hull. In the spring of 1886 she was employed in a different way. Having been bought to be sent to Gibraltar as a coal hulk, she was chartered for the summer months to be used as a place of amusement at Liverpool, where she attracted a large number of visitors. All further attempts to use her failed, and in 1888 she was sold for "old iron," and broken up on the beach at New Brighton.