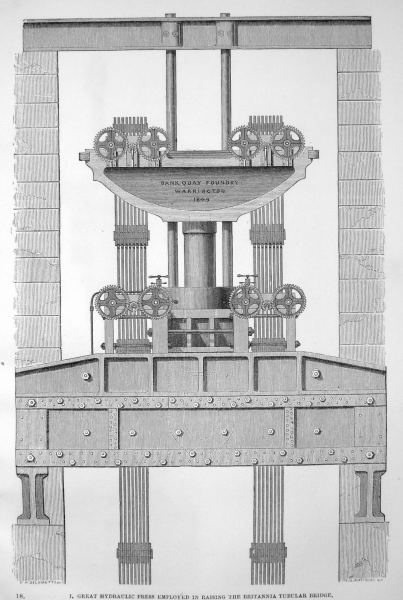 1846 'Fatal Accident. On Monday, John Clare, a married man, residing in School-brow, met with his death under the following melancholy circumstances :— On Monday morning he obtained employment as a labourer at the Bank Quay Foundry, and was engaged with several other workmen in removing part of the iron deck of vessel then in building, when some of the iron bars which supported it slipped, and this heavy piece of iron fell upon his head, fracturing his skull in a frightful manner. He was immediately removed home, and attended by several surgeons, who at once pronounced the case as hopeless. He survived about three hours, when his sufferings ceased. He has left a wife and eight children to deplore his loss.'[1]

1847 George Samuel Sanderson entered into partnership with Charles (Charles Tayleur (1810-1859)?) and Edward Tayleur; they opened a foundry at Bank Quay, Warrington.[2]. The 1847 date conflicts with that in the previous entry.

1847 Liverpool: 'THE NEW LANDING STAGE FOR ST. GEORGE'S PIER.
Through the kindness of a member of the Dock Committee, we have been admitted to an inspection of the new floating landing- stage adopted by the Corporation, designed by Mr. Cubitt, C.E.,..... The whole forms an immense deck of 512 feet in length, little short of 90 in breadth, and sharp at both ends, each forming a bow. The framework is of great strength, and, as a stage, well and judiciously put together. It is built upon upright posts, so that the water may be introduced, and the pontoons, or boats, upon which it is to float may be placed and secured under it.
The whole of the stupendous structure is to be kept afloat at all times of the tide by pontoons, or boats built of iron, and fixed under it, athwart ships, or at right angles with the deck. There will be thirty-six to thirty-eight of these vessels in all. With the exception of a few at each extremity, where the general "vessel" sharpens, these are of about eighty tons burthen each, and the weight of each in material is about 17 tons. They are flat decked, straight sided, and round at the bottom, which forms an arch inverted. They resemble ordinary steam-engine boilers, but of greater length, being about 80 feet. They were built by Messrs. Tayleure and Sandars [sic], of the Bank Quay Foundry, in Warrington, and are put together with great fidelity. These are each divided internally by watertight bulk heads, 9 feet apart, for greater strength, and for security in the event of damage. They are entirely of iron,— deck, sides, and bottom ; and air-tight. They were floated down by canal, and afterwards by the river, in pieces, two or three for each pontoon, as convenience offered. The pieces are put together on the margin of the basin where the stage is being built, and thence they are launched down, sideways, on regular ways. They have all strong iron hooks on each side, by which they are to be secured under the stage by other hooks, terminating rods of iron with screws and nuts. These pontoons will, with the seperincumbent weight of the stage, probably draw from 2 feet 6 inches to 2 feet 10 inches, leaving the deck at a convenient height for the steamers landing and embarking their passengers. .....'[4]

1848 'HYDRAULIC PRESS FOR RAISING THE BRITANNIA BRIDGE.- On Wednesday week, the large cylinder of the hydraulic press, intended to be used to raise the tubes of the bridge of the Chester and Holyhead Railway, was cast at the Bank Quay Foundry, Warrington. This cylinder is, we believe, the largest ever made for hydraulic purposes, and weighs 25 tons. It will have to sustain a pressure of upwards of 1,000 tons when at work.'[5]

1850 'THE SALE OF MATERIALS AT BRITANNIA-BRIDGE was concluded on Saturday last. .... The hydraulic presses have been purchased by the makers, the Bank Quay Foundry, Warrington, for the purpose of exhibition at the forthcoming industrial display of 1851. Northern Star and Leeds General Advertiser - Saturday 30 November 1850

1853 'On Monday afternoon last was launched from the ship-building yard of the Bank Quay Foundry Company, of Warriniglon, a beautifully-modelled iron steam-boat, of and 170 tons, b.m. She is intended to be used for the Pacific Steam Navigation Company as a tender on the Pacific Steam Navigation Company. She will be fully rigged as a schooner, and have a pair of highly-finished oscillating engines put on board by the Vulcan Foundry Company before she leaves the Bank Quay Shipyard.'[7]

1853 'The largest iron vessel ever built in Lancashire was launched on Tuesday, at Warrington, from the yard of Messrs Tayleur & Co., Bank Quay Foundry. The Tayleur, for so the vessel is named, is a first-class clipper-ship, and has been built for Messrs Charles Moore and Co., of Liverpool. She is of exceedingly handsome model, and her proportions are as follow:- Register, 1,730 tons, burthen 2,500, new measurement; length of keel and forerake, 225 feet; rake of sternpost, 5 feet; beam, 39 feet ; depth of hold, 28 feet ; shear, 2 feet 6 inches. The Tayleur, when completely fitted, will accommodate about 680 passengers, exclusive of cargo. She is double-rivetted throughout; is divided into five water-tight compartments, each fitted with pumps, and contains altogether about 780 tons weight of iron. The ship will form one of Messrs Pilkington & Wilson’s "White Star” line of packets.— Albion.'[8]. Note: The Tayleur was wrecked on her first voyage.[9]

1853 Produced the ironwork for the original Arpley Bridge, Warrington for the Warrington and Stockport Railway's crossing of the River Mersey.

1854 'Ship Launch at Warrington. — Both sides of the Mersey, at Warrington, presented, on Saturday last, a most animating scene, an immense number of people of all classes being assembled to witness the launch of a noble iron clipper-ship from the shipbuilding yard of the Bank Quay Foundry Company. ..... The new vessel was built for Messrs. Charles Moor[e] and Co., of this town (the owners of the unfortunate ship Tayleur,) who determined upon calling her the Golden Vale, but that firm lately sold her to Messrs. Hamilton and Adams, of Greenock, the new owners decided upon giving her the name of - "Lady Octavia." Every facility was given by the builders to the assembled crowds to witness the launch, a great number of people being admitted into the shipbuilding yard. The arrangements for the launch was under the superintendence of Captain Bennett, late commander of the ship Koh-i-noor, who also took the charge of the Lady Octavia until she was moored in the Sandon dock. The new ship is two-decked, burthen 1250 tons, old measurement, and 1300 register. Length of keel 190 feet, breadth of beam 26 feet 6 in., depth of hold 22 feet 6 in., fore rake 10 feet, stem rake 3 feet. Her framing is of angle iron, and she is strongly braced with diagonal braces. The Lady Octavia has a poop cabin, 55 feet long, and carried over all, a house on deck, also 55 feet long, the width being 18 feet, with a spacious forecastle. After the launch, an influential party of gentlemen employed in the shipping interest, partook of a dejeuner in a house, fitted up in the yard specially for the occasion.' [10]

1854 'Launch of the Deer-Slayer, at Warrington.— A large and handsome iron vessel of this name was launched on Thursday, from the yard of the Bank Quay Foundry, in the presence of a large concourse of spectators. The Deer-Slayer has been built for Mr. Blythe, of this town. The following are the dimensions of the ship:— Length between the perpendiculars, 142 feet 3 in.: breadth of beam, 26 feet; depth of hold from underside of deck amidships to the top of ceiling, 15 feet 6 in.; height between decks, deck to deck, 6 feet 6 in.; register, about 500 tons. In model she is very beautiful, and will be extra strong, the frames being of angle iron 4 in. by 3 in. and 7-16ths thick, with diagonal bracings, and the flooring 18 in. deep, extending well up to the bilge. Her figure-head is a finely carved model of the deer-slayer, gun in hand, and in that position so well known to sportsmen — it is most appropriate to the name of the vessel. ..... [11]

1854 'ACCIDENT TO A NEW CLIPPER SHIP IN GEORGE'S DOCK.- On Wednesday afternoon last, the fine new iron clipper-built ship Liverpooliana, which was being fitted-up at the south-west side of the George's Dock, fell over on her side, the cause assigned being the want of ballast and from her topgallant masts being across. .... The Liverpeoliana is a 390 tons burthen, and was intended to sail for Pernambuco on the 26th of this month. She was built by the Bank Quay Foundry Company at Warrington, for Messrs. Charles Moore and Co., of this town, and was launched some, weeks ago. [12]

1855 'The Bank Quay Foundry, Warrington, a firm noted for the construction of iron ships, has for the present ceased working, and all the hands have been discharged. There were 150 shipwrights constantly engaged in that extensive concern, besides many hundred operatives of other handicrafts connected with the building of ships. All these will be for the present thrown upon the labour market, but no doubt the owners, who are men of large capital, will shortly resume operations.'[13]

1856 Advertisement for sale of works contents. Included 'one locomotive, fixed so as to act as a stationary engine...'. Machinery for making heavy ordnance was included.[14]

1860 Advert: 'COMMODIOUS TRADE PREMISES IN WARRINGTON.- To be LET, for an unexpired term of 14 or 21 years, commencing on the 29th September, 1858, all those extensive conveniently situated PREMISES, at Bank-quay, Warrington, formerly part of Bank-quay Foundry, but recently occupied by Mr. George Sims for the manufacture of borax. The buildings cover about 1,845 square yards of land, and there are besides about 6,381 yards of vacant ground. The situation is one of the best for trade purposes in the county, having the advantages of railway and water communication. There is a branch railway into the yard from the London and North western line, and the St. Helen's line passes close to the premises. There is a high-pressure steam-engine. with two boilers and shafting, in the building . There is also a wharf adjoining the yard, where goods brought up the river Mersey are discharged, free of toll, the tenant of these premises having the use of the crane, wharf, &c. for the facility of business.—For further particulars apply on the premises; and to treat, to Messrs. R. and T. Ramsden, Chemical Agents......'[15]