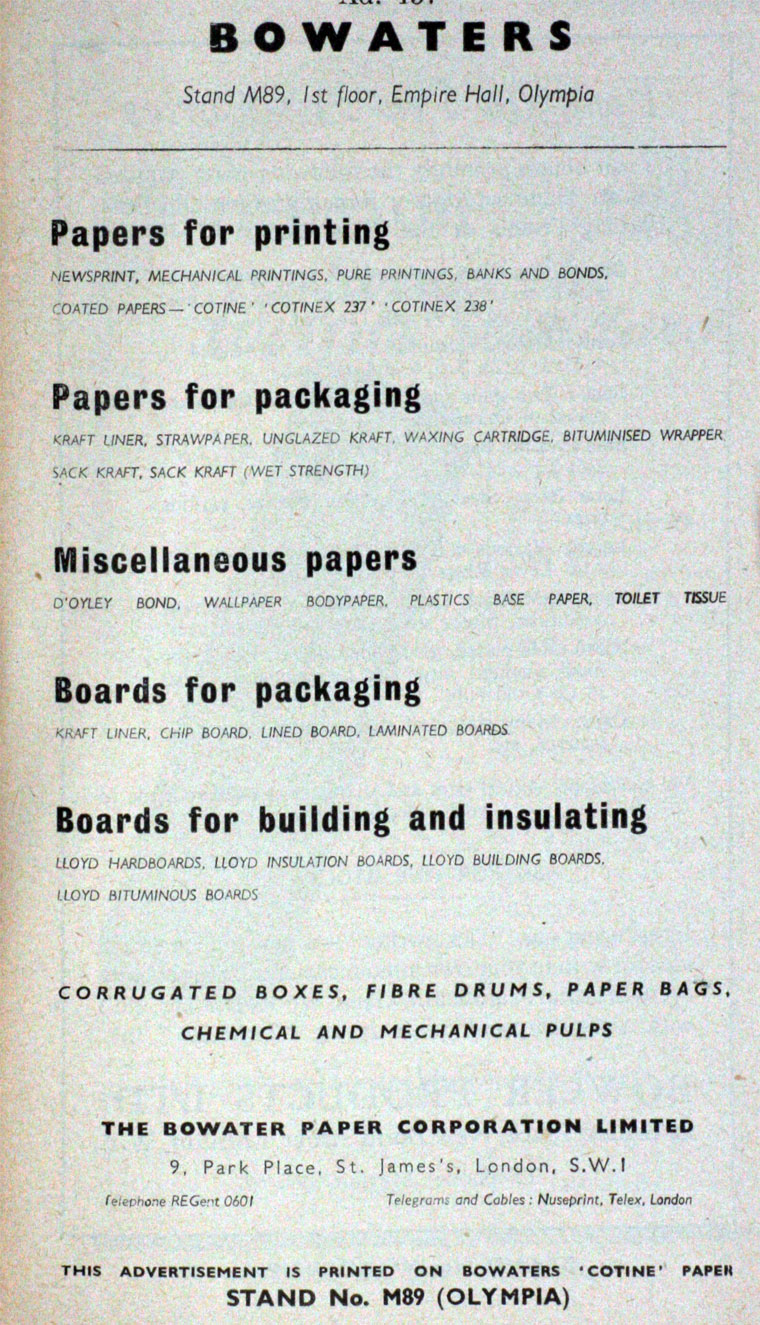 1947 Bowater's various paper and pulp interests were re-organized; a streamlined structure was instituted, in which a number of wholly-owned operating companies reported to a holding company, which was given a new name, the Bowater Paper Corporation.

The war had much less impact upon Bowater's North American operations than on the British operations; from 1944 to 1950 US consumption almost doubled.

For Sir Eric Bowater the formation of the Bowater Paper Corporation marked a new point of departure. Over the ensuing decade and a half he worked tirelessly to build up the business on both sides of the Atlantic. In the United Kingdom, the strategy of diversification away from newsprint continued through the late 1940s and early 1950s with further acquisitions of paper products firms.

In North America, by contrast, the relentless rise in U.S. demand for newsprint led to the construction of a paper mill at Calhoun, Tennessee, marking the firm's debut as a producer in the United States.

By the mid-1950s Bowater was the largest producer of newsprint in the world. Bowaters was handling more than 1 million tons of raw materials and finished products by sea So that the organization might be self-sufficient to the extent of at least one half of its shipping needs, nine new ships were built in British yards.

1956 In the United Kingdom, the end of government paper control inspired a resurgence of optimism regarding demand for newsprint, and further capacity was added at Kemsley and on Merseyside. A company was formed jointly owned by Bowater Corporation with the market leader in tissue technology, the Scott Paper Company of Philadelphia, - Bowater-Scott Corporation.

By the beginning of the 1960s, it was plain that Bowater's strategy was flawed. Other competitors had made substantial investments in newsprint capacity and from 1957 the market was oversupplied, causing prices to weaken and profits to disappear.

Although the expansion programme was curtailed, the firm was already heavily burdened with debt and the advance into Europe continued to absorb capital. Matters were made worse by production problems at the new American Catawba pulp mill and by the move to prestigious new headquarters in London's Knightsbridge in 1958, which doubled per capita office costs.

1962 The death of Sir Eric Bowater in August, in the midst of the financial crisis marked the end of an era in the history of Bowater.

1962-72 Retrenchment was a hallmark of Bowater's strategy in this decade.