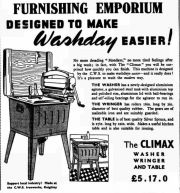 1937 'C.W.S. IRONWORKS. £20,000 Extension At Keighley Opened. "Those who have followed closely the fortunes of the Keighley Ironworks will agree that if ever a history of Keighley comes to be written it must certainly be one of extensions," said Mr. W. Dodds, a C.W.S. director, at the opening yesterday of the new extension of the C.W.S. Ironworks, in Goulbourne Street, Keighley. Mr. Dodds said that since the works were acquired by the C.W.S. in 1908, no fewer than eight extensions to the premises had taken place. There were 74 employees at the works in 1906, and now there were three times that number employed there, and whereas in the first year of C.W.S. control the wage bill amounted to between £4,000 and £5,000, it amounted to over £10,000 in 1936. The extension was opened by Mr. Harry Whalley, manager of the works for 29 years, who retires next month. Some 440 representatives of the Co-operative movement from all parts of the country were at the luncheon in the Mechanics' Institute. During the luncheon Mr. Dodds, on behalf of the directors of the C.W.S., presented to Mr. Whalley a solid silver tea service to mark his impending retirement and as a recognition of his long service. The extension, which has cost approximately £20.000, comprises a three-storey building at the junction of Goulbourne Street and Starkie Street.'[4]