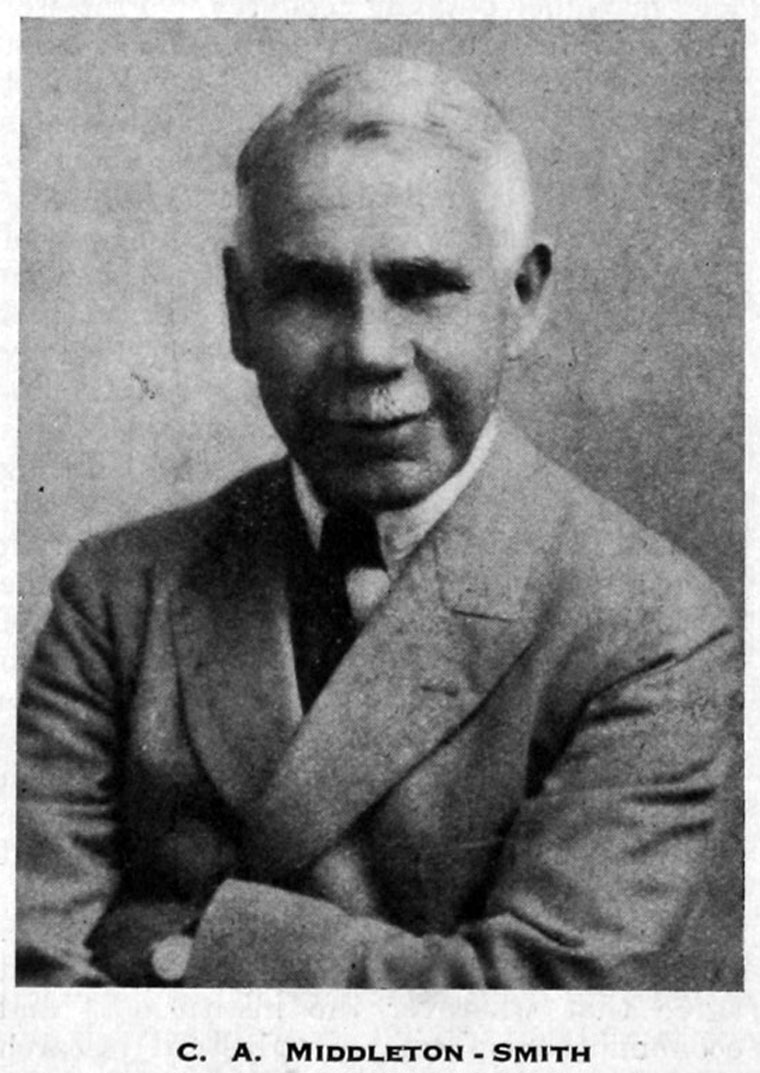 "Professor CADES ALFRED MIDDLETON SMITH, M.SC.. LL.D., who died at his home in Guernsey on 31st July 1951, was emeritus professor of mechanical engineering in the University of Hong Kong. He was born in 1879 and educated at Portsmouth Grammar School and the Royal Naval Engineering College, Keyham. After gaining experience in the works of Messrs. Belliss and Morcom, Birmingham, electrical engineers, as chief assistant in the testing department, he began, in 1901, his long and distinguished career as a teacher of engineering with the post of demonstrator at Birmingham University. Three years later he came to London to carry out the same duties at King's College, and from 1907 to 1912 was assistant Professor of civil and mechanical engineering at the East London College. He then accepted an invitation to go to Hong Kong as the first Taikoo Professor of engineering in the University there. His work, which lasted for nearly thirty years was at first of a pioneering character, but owing to his wide outlook and great mental vigour he quickly developed the department for which he was responsible.

During the 1914-18 war Professor Middleton Smith served as an engineer in the Hong Kong Defence Force. After his return to Great Britain in 1944 he was engaged on work for the Central Registry and for a period was attached to the Ministry of Labour, but he was hampered by ill health and in 1943 was obliged to give up active work. Professor Middleton Smith was elected an Associate Member of the Institution in 1904 and was transferred to Membership eight years later. He presented a paper in 1908 on "Method of Detecting the Bending of Columns" and another in 1909 on "Compound Stress Experiments". In the curse of his career he had specialized in the strength of materials and prime movers this subject forming the basis of many of his lectures- In he contributed numerous papers embodying the results of his researches to other technical societies and journals and was the author of three publications : "Section Gas Plants", "A Handbook on Testing Materials", and "The New Steam Tables", this text-book being written in conjunction with Mr. A. G. Warren, B.Sc.

"...His first appointment after completing his engineering training was as an assistant engineer, for a few months in 1900, with the Plymouth electricity supply undertaking. Later in that year he joined the staff of Belliss and Morcom, Ltd., Birmingham, and for twelve months or so was chief assistant..." [more]