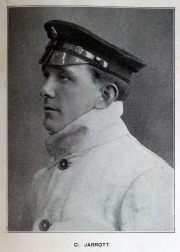 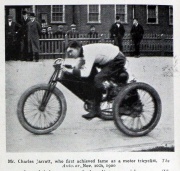 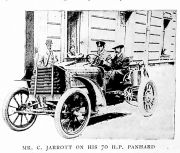 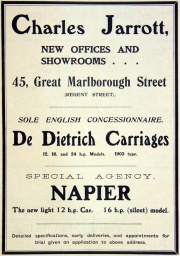 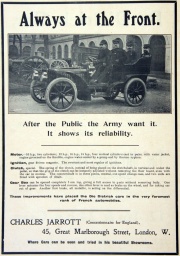 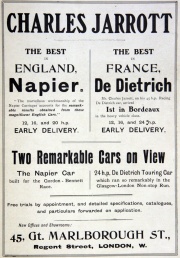 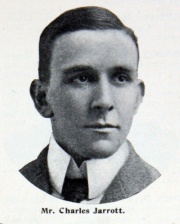 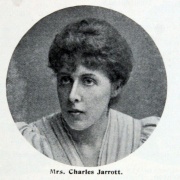 1877 March 26th. Born at 25 Hendon Street, Pimlico, the son of Robert Jarrott, a blacksmith's labourer, and his wife, Martha Rosser. He had three elder sisters.

Believed to have been educated at schools in London and Cambridge and then articled to a firm of solicitors.

c1896. 'It pleased Charles to wear a high collar and ape the manners of more fortunate people, and talk nonsense about Oxford, Cambridge or any other university whose name he heard mentioned; but Charles was educated, if he was, at what was called a church school in Pimlico' [2]

1898 March. Hon. Secretary of the Motor Car Club, refused an amateur certificate and declared a professional. 'In November last year the Motor Car Club held a competition, and presented gold medals for the fastest motor bicycle and the fastest motor tricycle, the competition taking place on the Sheen House Club track. In the bicycle competition Mr Jarrott was drawn against Mr H. O. Duncan, who once held several professional championships, but who has done no racing for ten years past. Mr Duncan's machine was not fitted with pedals, and consequently he had nothing to do with its actual propulsion, but was himself propelled round the track by the motor. The trials were promoted by a private club, and was held privately on a private track.'[3]

1899 He visited the USA to report on the machines being made there.

1899 November. Summoned for 'furious driving' on a motor tricycle.[4]

1903 Letter to The Times newspaper regarding the dangers of motor racing. Address is 45 Great Marlborough Street, Regent Street, London.[6]

1904 JARROTT, Charles, 45, Great Marlborough Street, Regent Street, London, W. Governing director and chief partner of Messrs. Charles Jarrott & Letts, Ltd., who are the sole English concessionaires for the famous de Dietrich cars, and also are the British agents for the light car known as the Oldsmobile. Holds a prominent position in British motor-racing circles, and has several big races standing to his credit. Commenced motoring in 1896; instinctively took to racing, and in September, 1899, won the Motor-Car Club's five miles championship on a de Dion tricycle in 8min. 11.6secs., and at Aston, won the ten miles' tricycle scratch race in 17mins. 22secs. Took part in fifty different races in 1899, amongst them being his match with the famous trotting horse, "Gold Ring," which he gave 250 yards' start in a mile, on a grass track, and beat easily. Secured tenth place in the great Paris-Berlin race in 1902, when he drove a 40-horse Panhard, and finished second in the Circuit du Nord race in 1902. Was a competitor on a 70-horse Panhard in the Paris-Vienna races (1902), and in the great Ardennes race (1902), in which he started thirty-fourth, and finished first, covering the 321 miles in 353 minutes - 54 miles an hour — thus putting himself at one bound at the head of motor-racing. In August, 1902, added still further to his racing laurels by beating the kilometre record on the Welbeck track, his time being 28.2 seconds - 78 miles an hour. Drove a 40 h.p. Napier car in the 1903 Gordon Bennett race, but had to retire owing to an accident, in which he broke his collar-bone. Finished first of the big racing cars to arrive at Bordeaux in the Paris-Madrid race, 1903, and was third in classification. He has spent a good deal of time in America. He has been manager successively, and successfully, of the de Dion-Bouton and Panhard businesses in this country. Hobby: Shooting. Clubs: Automobile de France, Automobile of Germany, Irish Automobile, A.C.G.B.& I. [8]

1944 Obituary: Lieut-Colonel Charles Jarrott O.B.E. formerly a racing motorist died in London aged 66. Founder and past chairman of the Automobile Association. Chairman of the Junior Car Club from 1919-25. First man to drive a car at 84 mph and maintained this for fifty miles. Winner of the 1901 Paris-Berlin, 1902 Paris-Vienna and 1903 Paris-Madrid races. [14]

His wife survived him by just over a year, dying on Feb 17th 1945 at Oaklea, Wimbledon Park SW19

JARROTT, C.- Mr. Jarrott studied for the law until seven years ago, when he first entered the ranks of automobilists. He has taken part since in almost all important events of the Club, gradually coming to the front amongst leaders in the sporting side of the movement. No doubt the crowning event in his successful racing career was the winning of the Ardennes Race of last year against all the best-known continental racing chauffeurs. Amongst the many cars he has driven are several motor bicycles and 70 h.p. Panhards. Having now turned his attention to the business side of automobilism, he is interested in the Napier cars, and sole licensee for the United Kingdom of the De Dietrich cars. Mr. Jarrott will drive one of the Napier cars in the coming Gordon Bennett Race.