Despite appearances, there is a river, and there are three arches 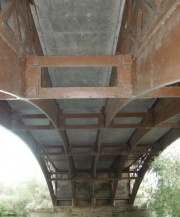 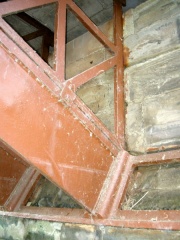 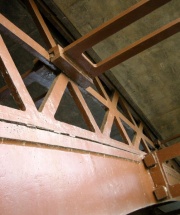 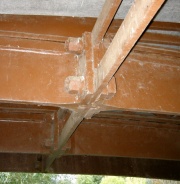 Carries the A513 over the River Tame at Alrewas, Staffordshire, WS13 8QX.

Near the National Memorial Arboretum

Contemporary with Mythe Bridge, and probably as little appreciated. Chetwynd bridge has three relatively short spans compared with Mythe Bridge's impressively long single span. This incurred the expense of additional piers, but it did make for much simpler cast iron structures. Here, the load of the roadway is transmitted to the arches by simple cast iron panels, whereas Mythe Bridge has a complex arrangement of individual diagonal struts.

1847 Advertisement: 'STAFFORDSHIRE. PERSONS desirous of Contracting for PAINTING the Iron Balustrading, Cornices, Posts, and Rails, and GAS-TAR the Ribs. Roadway Gratings, and Underworks of CHETWYND BRIDGE, are requested to transmit tenders, sealed up, post paid, on or before the 10th day of August next, addressed to Mr. SMITH, County Surveyor, Stafford, of whom specifications of the work may be had. Tenders marked "Painting and Gas-taring Chetwynd Bridge." July 22nd, 1847.'[1]

1900 'There are few road bridges in this district which do not bear the notice that they are insufficient except for the ordinary traffic of the district. This means, of course, that road locomotives or other ponderous vehicles can only be taken over at their owner's risk, but road locomotives are becoming so common that they will soon be entitled to be classed as ordinary traffic. The Surveyor to the Staffordshire County Council has advised the closing of no fewer than six bridges to locomotive, traffic, and naturally the proposal has aroused the opposition of owners of traction engines, whose objections were heard recently by a Local Government Board inspector, whose report will be issued in due course. One of the bridges which have been condemned as unsafe for heavy traffic is the Chetwynd Bridge, Alrewas, which, according to the County Surveyor, had one span broken in 1878, and another in 1887, by traction engines. To make the bridge safe for all traffic would entail an expenditure of £2,000. With the increased use of road locomotives this wholesale closing of bridges may have a serious effect, and no doubt the County Council will be compelled to face the cost of erecting structures suitable for all modern requirements.' [2]