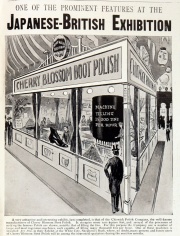 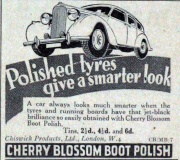 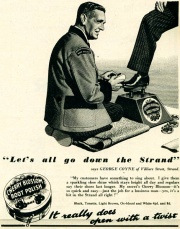 c1886 A small soap factory at the junction of Hogarth Lane and Burlington Gardens, London, was established.

1900 By this time the brothers Charles and Dan Mason were running the business under the name Chiswick Soap Company. They had introduced "Red Poppy" and "Primrose" soft soaps as well as "Forget-me-not" furniture polish and "Buttercup" metal polish.

1901 A serious fire interrupted the business, but work continued.

1905 Seeking to make use of the many 5-inch circular pieces of tin-plate which were the by-product of their other activities, the brothers turned to creating smaller tins in which they could sell a polish for use on boots and shoes, which would not rub off on to clothing in the way that the existing 'blackings' did. A chemist was engaged to produce a suitable formulation.

1908 Participation in the Franco-British Exhibition at the White City. Above the Company's stand there was a large electric clock which served as a focal meeting point allowing visitors to 'meet under the Cherry Blossom clock'.

1910 Participation in the Japan-British Exhibition in July at White City.

1911 The whole of the long-running Exhibition at the Crystal Palace was hired by the company for a full day and the gates thrown open to free admission upon presentation of a lid from a Cherry Blossom tin. The company built a replica of the Big Ben clock tower which again encouraged people to 'meet under the clock'. The event was a major marketing coup and, with attendance of more than 200,000 visitors, produced traffic chaos which London had not witnessed to that date.

1913 Formation of Chiswick Polish Co jointly owned by the Mason family and Reckitt and Sons. The businesses of William Berry and Master Boot Polish Co (both acquired by Reckitt and Sons in 1912) were integrated into Chiswick and all metal polish operations transferred to Reckitt's in Hull.

1930 First occupancy of 50 semi-detached houses in Staveley Gardens (adjacent to the firm's Printing Works), provided for the workforce.

1960 Acquisition of Kay Brothers of Stockport, makers of Zip firelighters.

1970 Transfer of Group's Head Office from Hull to Chiswick.

1972 Manufacturing transfers from Chiswick to Hull.

1998 Head Office transferred from Chiswick to Windsor and, subsequently, Slough.