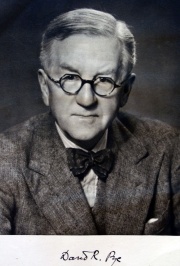 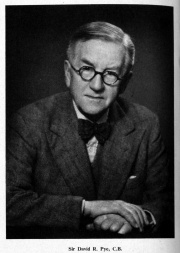 Sir David Pye died on 20th February 1960 at the age of 73. He taught engineering and was a fellow at the New College, Oxford and of Trinity College, Cambridge. In 1952 he was elected President of the Institute of Mechanical Engineers.

WE record with regret the death of Sir David Randall Pye, which occurred last Saturday, February 20, at his home at Shackleford Godalming after a long illness. Sir David, who was seventy-three, was a past-president of the Institution of Mechanical Engineers, and was one of the few engineers apart from professors, to hold fellowships at the universities of Oxford and Cambridge.

Sir David began his education at Tonbridge School and went on from there to Trinity College, Cambridge. He was one of three men to secure a First Class in the Mechanical Sciences Tripos in 1908. Immediately thereafter, he spent some time in the works of Mather and Platt, Ltd., to gain practical engineering experience.

In 1909 Sir David was invited to become a lecturer at the new engineering laboratories at Oxford University and was elected a Fellow of New College. In the succeeding two or three years, he did a great deal of lecturing and, in addition, assisted Professor Frewen Jenkin in an extensive research programme, one of the results of which was the establishment, for the first time, of accurate figures for the physical properties of refrigerants at low temperatures.

Soon after the start of the first world war, Sir David was commissioned in the Royal Flying Corps as an experimental officer at the Armament Experimental Station at Orfordness. Subsequently with the formation of the Royal Air Force, he was transferred to the aeroplane testing station at Martlesham Heath where, it is said he learned to fly as a pilot. Following his demobilisation in 1919, Sir David resumed his work at Oxford University, but during the summer of that year, he was invited to return to Cambridge as a Fellow and Lecturer at Trinity College. Apart from his engineering lecturing at Cambridge, Sir David participated over the next six years in a research programme on the combustion of volatile fuels. Much of the work was carried out at Sir Harry Ricardo's works at Shoreham.

In 1925 a directorate of scientific research was established at the Air Ministry under Dr. H. E. Wimperis. Sir David was invited to join Dr. Wimperis as deputy-director. When Dr. Wimperis retired in 1937, Sir David succeeded him as director of research at the Air Ministry and in that office was mainly responsible for the development of methods and equipment to enable the Royal Air Force to accomplish so successfully its role in the second world war. Sir David continued his work at the Air Ministry until 1943 when it was decided that the research programme could be limited to projects which could be expected to result in effective weapons of war within two years. On that account, Sir David was permitted by the Air Council to relinquish his appointment as director of scientific research, when he was invited to become Provost of University College, London.

His Provostship was no sinecure! University College had suffered severely in the air attacks on London in 1940-41 and, in consequence, all the staff and students had been evacuated to seven different centres in various parts of the country. Before the war had finished, Sir David was occupied with plans for rebuilding the college, acquiring new sites for its future development and for making possible the re-integration of the scattered faculties of the co11ege into a single community. By the time Sir David retired from the office of Provost in 1951, most of that task was successfully accomplished. In the New Year Honours of 1952, his work for University College was fittingly recognised by the conferment of a knighthood; he had received the honour of C.B. in 1937.

Sir David had been a member of the Institution of Mechanical Engineers since 1934 and was first elected to its council in 1943. Shortly after his retirement from the Provostship of University College, he was elected president of the "Mechanicals." His presidential year was an important one, as it was a year in which close study was being given to the future of technical education In that study, Sir David's experience and scholarship were a great asset. Inevitably, his presidential address, delivered in October, 1952, was devoted to the subject of the higher education of engineers. In that address, Sir David emphasised that engineering was an art as well as a science; he did not hesitate to criticise engineering education for its lack of attempt to give some experience of the reality of design procedure. Sir David took the view that the art of engineering included a great deal that was outside "formulated theory." The rule-of-thumb, he said, played, and would always play, an important part, and rules-of-thumb, Sir David added, were accumulated by experience.

Opinion of this kind, cogently expressed by Sir David, was unquestionably valuable in any consideration of future trends in technical education. He did not shrink from saying what he thought was needed, as the following quotation from his "Mechanicals" address indicates: "The growing tendency to-day is to recruit from among those who have taken university degrees; we may perhaps assume as a working hypothesis, but with many notable exceptions, that as a class the ablest recruits to the engineering profession find their way to the universities. We should therefore look to the universities to feed back into industry first-class minds with a well-balanced scientific and technical background; many of them minds that are ready to be stimulated, to creative activity by contact with the practical needs of industry. Are we choosing the right way to set about the task of providing the needed background while at the same time retaining sufficient flexibility in the courses to allow the spark of originality, when it exists, to grow? .... Even if one cannot hope to introduce the atmosphere of a design office it would be something achieved if the university student could be made more aware of the importance of design in the progress of engineering."

As well as being a past-president of the Institution of Mechanical Engineers, Sir David was a Fellow of the Royal Society and a Fellow of the Royal Aeronautical Society. To the latter Society, he delivered the Wilbur Wright memorial lecture in 1936. He was also an Honorary Fellow of University College, London, and an Honorary Fellow of the Institute of the Aeronautical Sciences (U.S.A.). Furthermore, Sir David was the author of a number of technical, and non-technical, books and of many scientific papers.

We suspect that a meeting with Sir David seemed in prospect a somewhat daunting experience to young men. For he looked so much what he was, a very clever man with a deep insight into technical problems and no truck whatever with any kind of folly! But closer contact revealed a mind, firm enough but also kindly, an unsuspected depth of modesty, and an underlying humour.

Sir David was among the leaders of those who got theoretically well educated young men appreciated in this country in what was before regarded as a very practical art. It thus seems a little paradoxical to learn how insistent he was upon the need for training in the art as well as the science of engineering design and to discover his respect for "rules of thumb." But in fact there was no inconsistency. For the pioneers of higher technological education would very probably not approve to-day's tendency to treat research as a higher form of engineering activity than design. Sir David had experience in both fields and bad no illusions. He questioned, as many have continued to question since whether modern university courses in engineering are producing men with the qualities needed by designers.