Grace's Guide is the leading source of historical information on industry and manufacturing in Britain. This web publication contains 142,981 pages of information and 229,141 images on early companies, their products and the people who designed and built them. 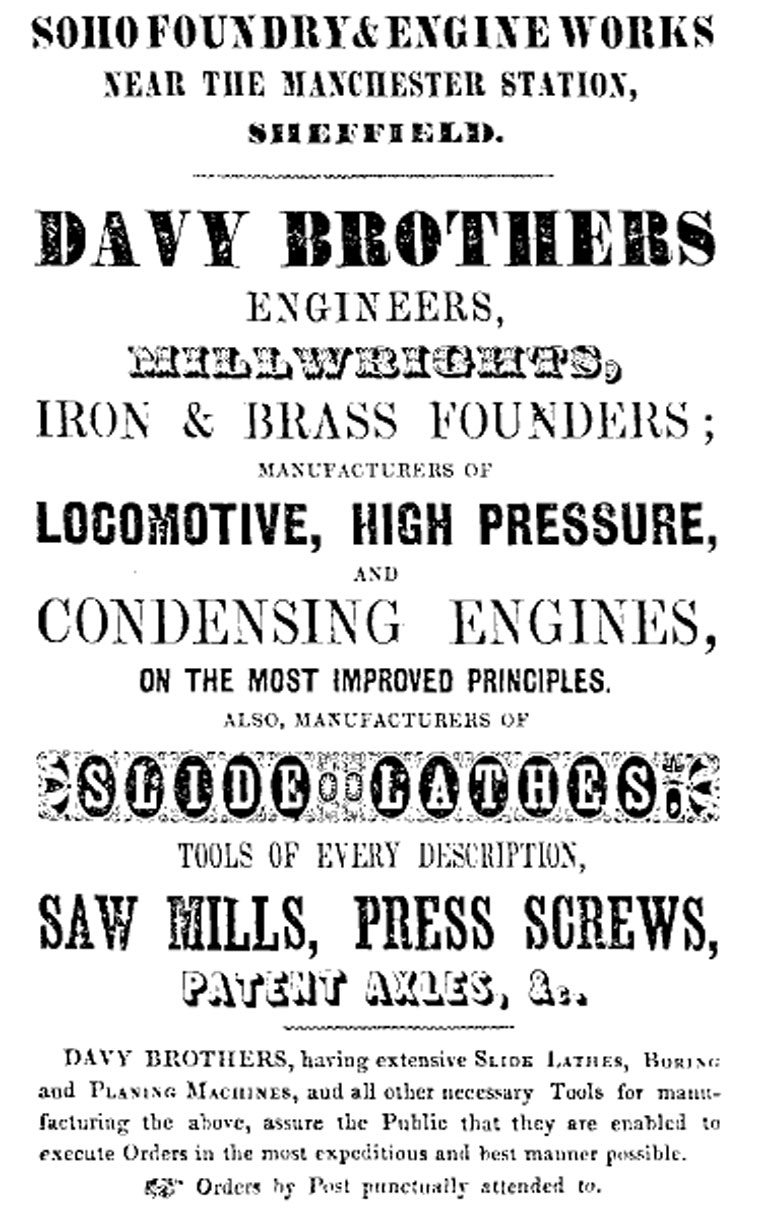 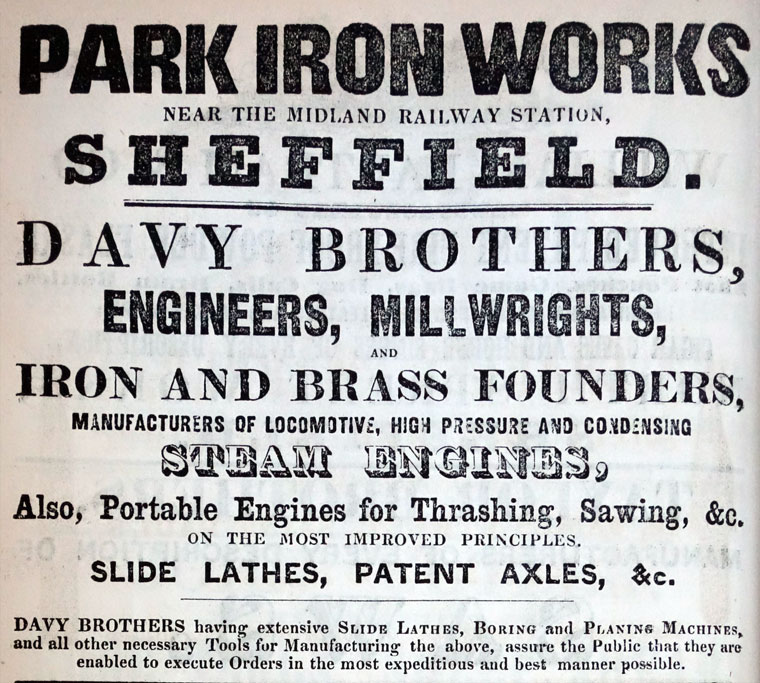 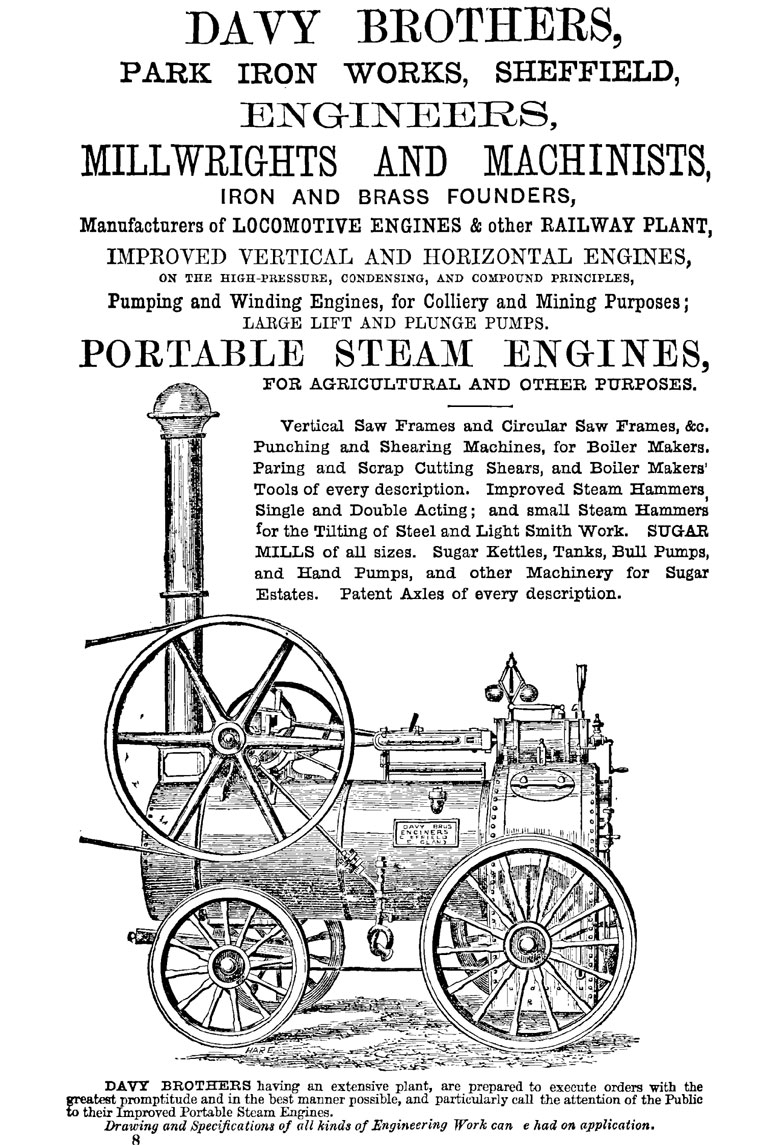 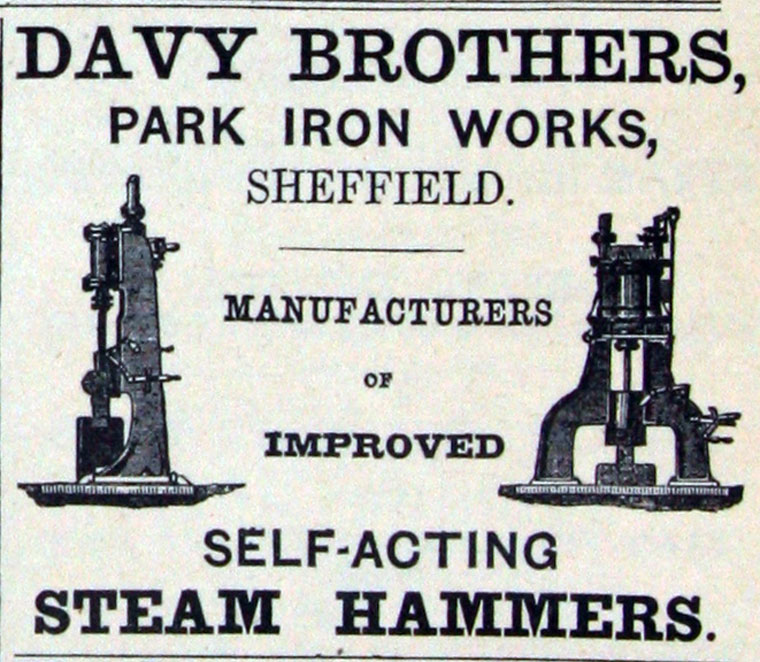 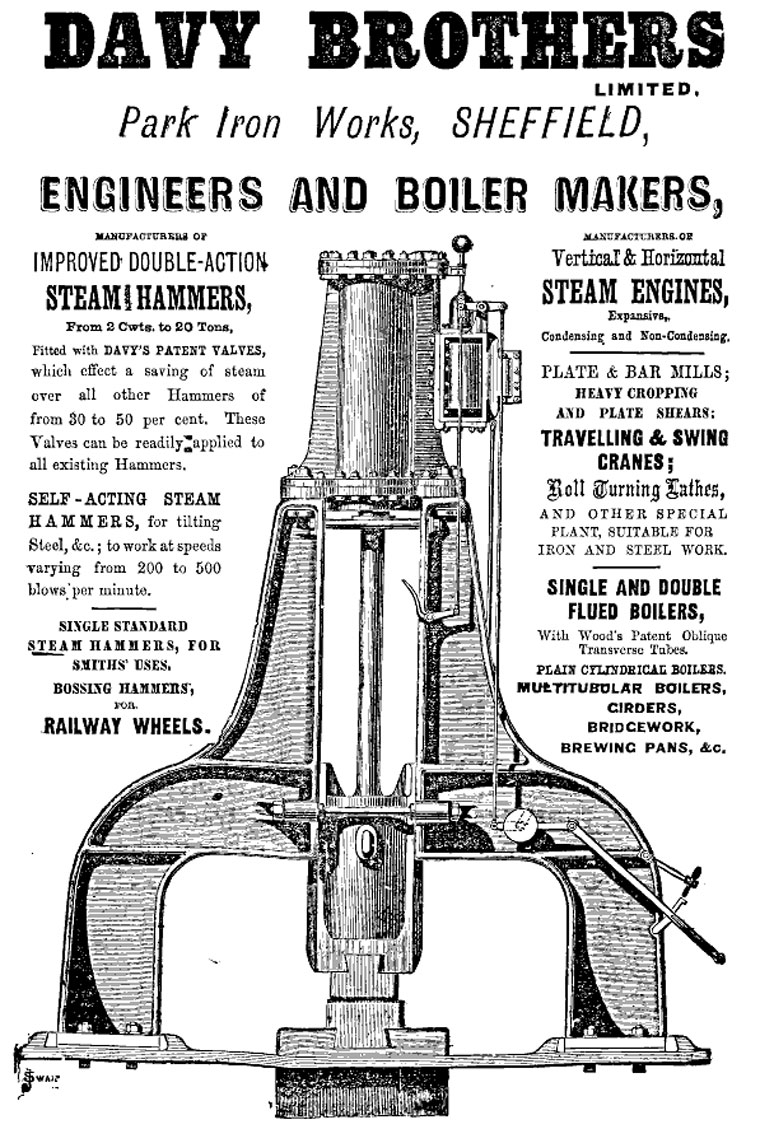 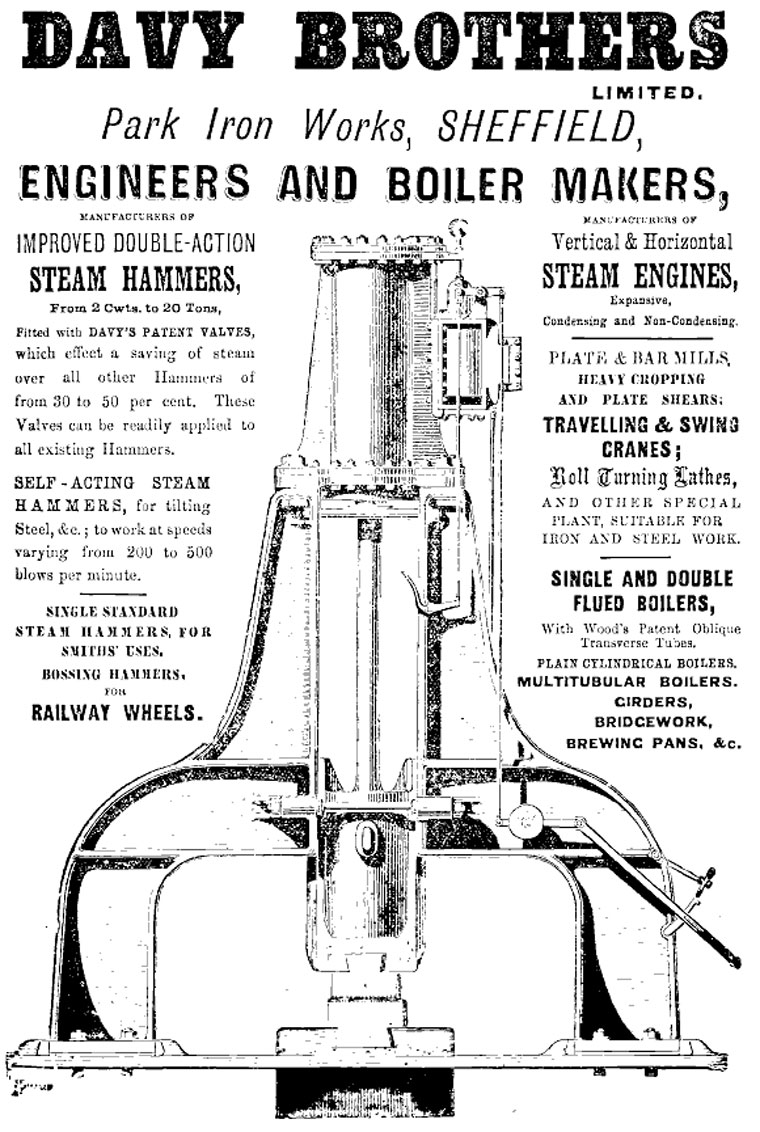 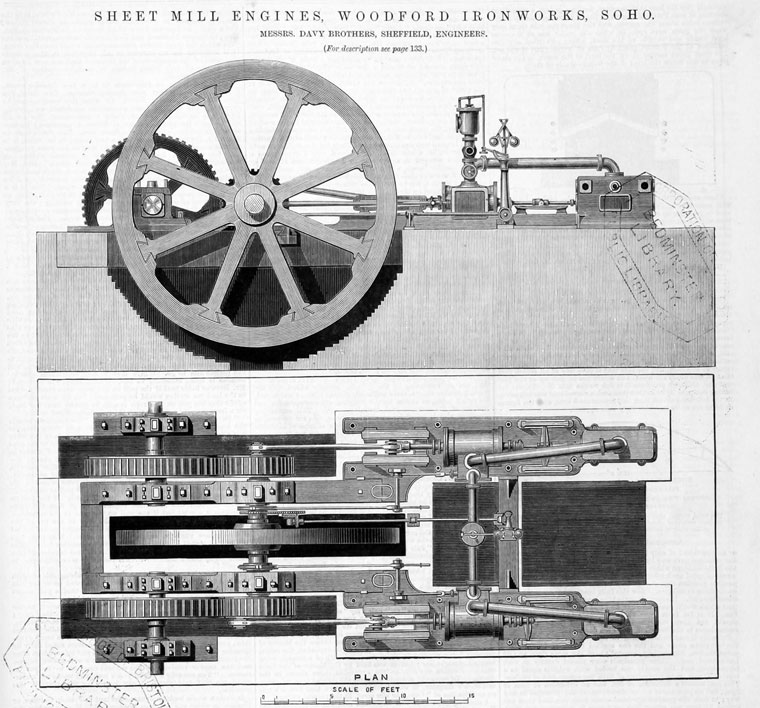 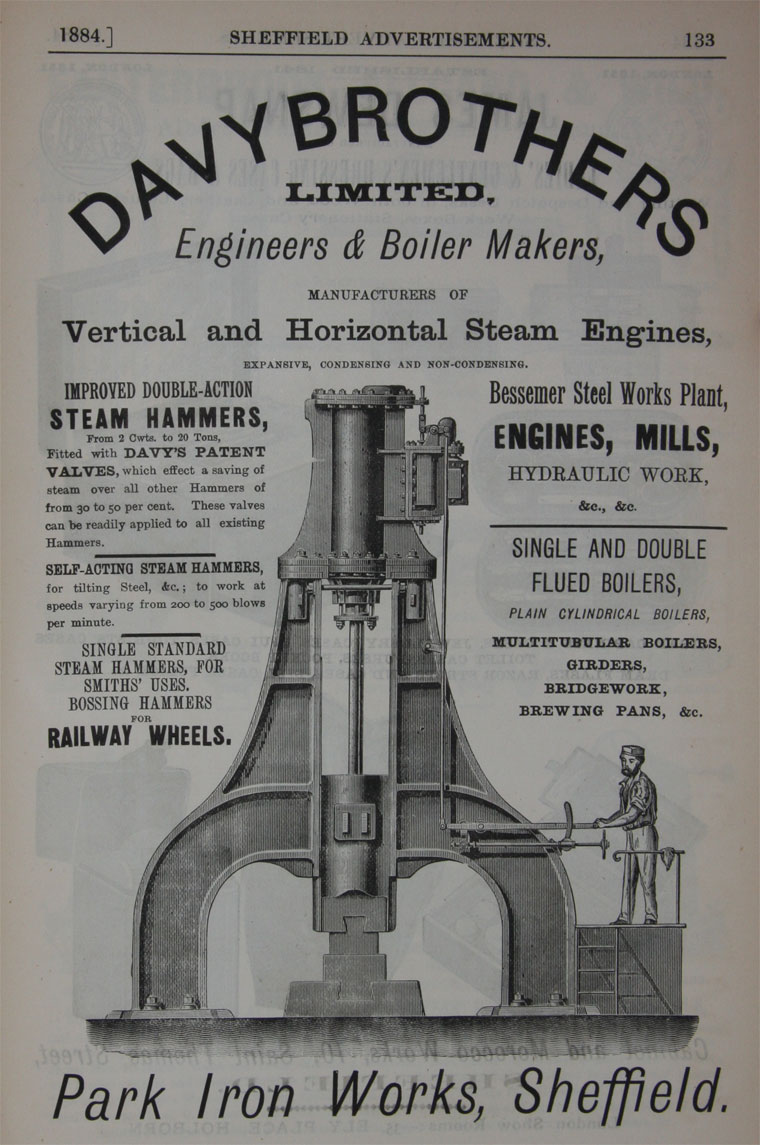 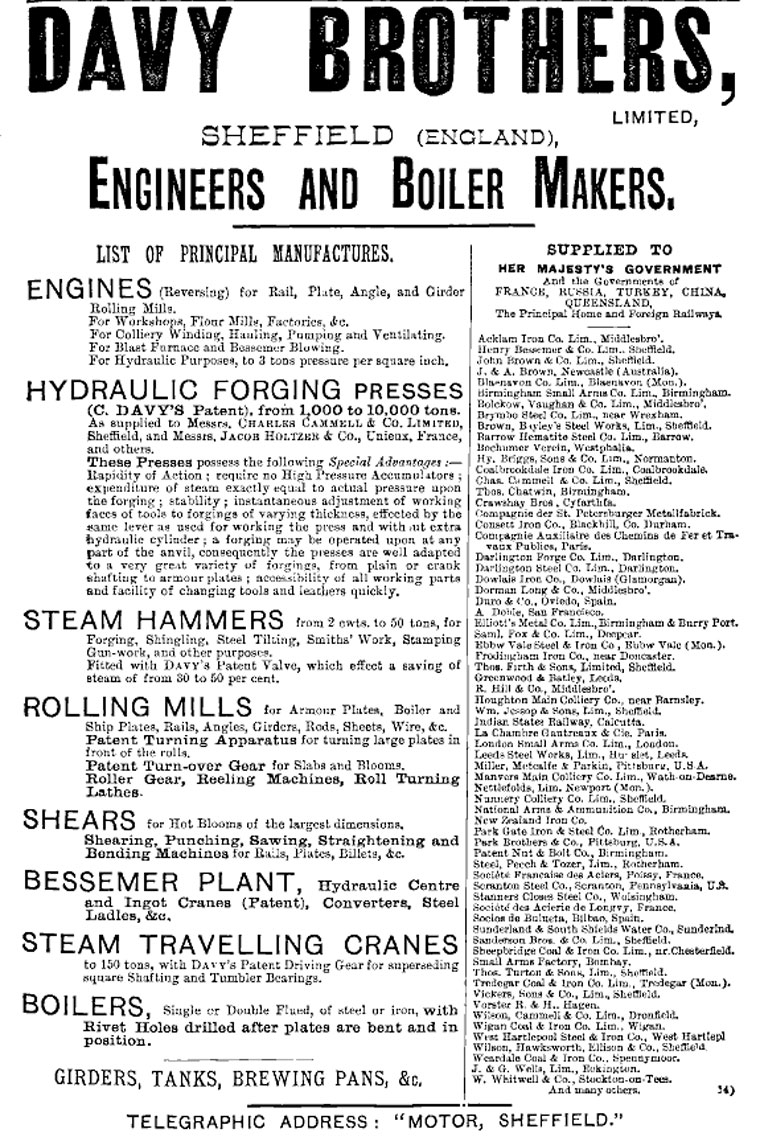 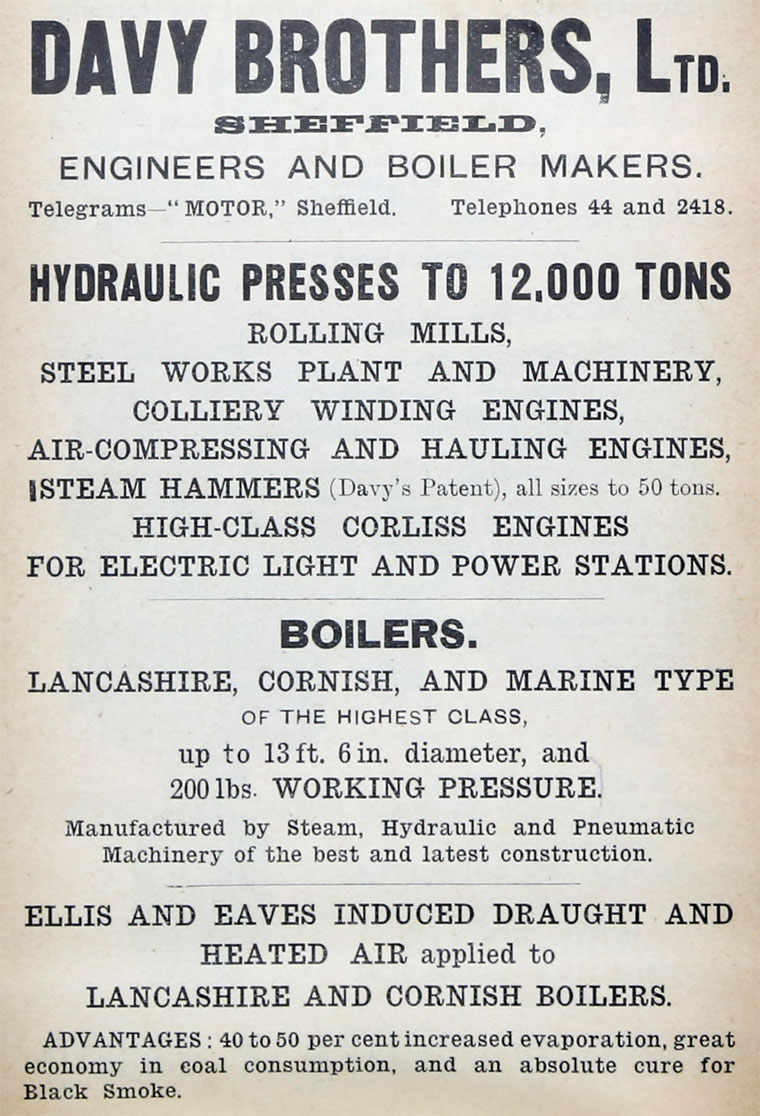 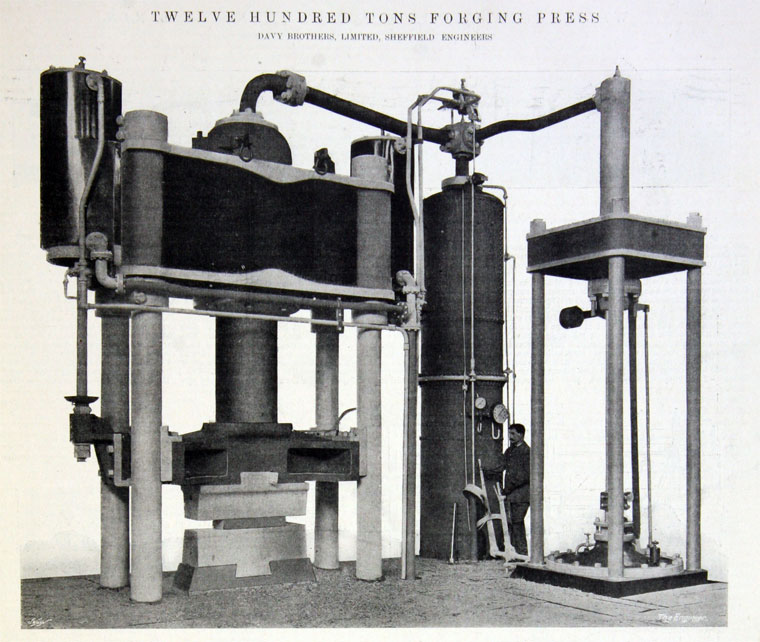 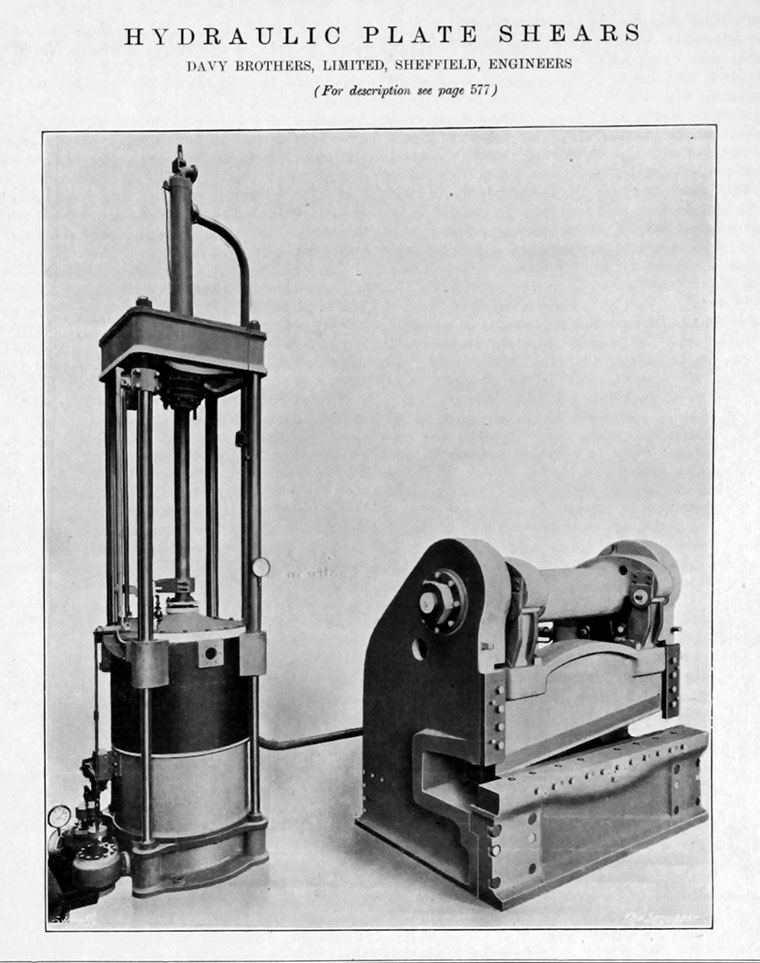 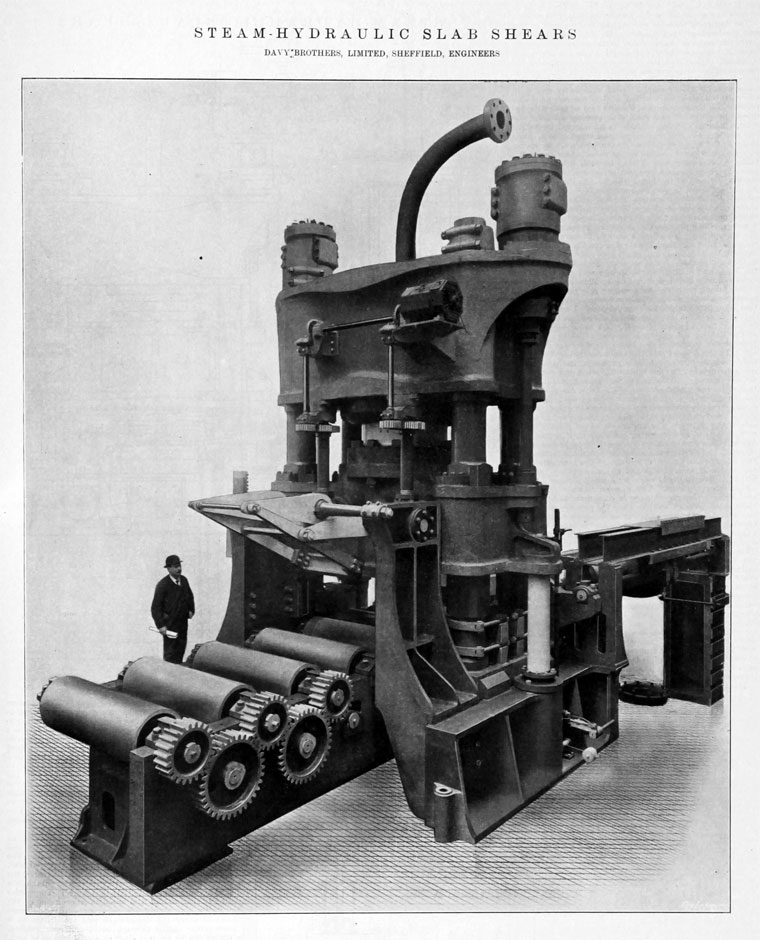 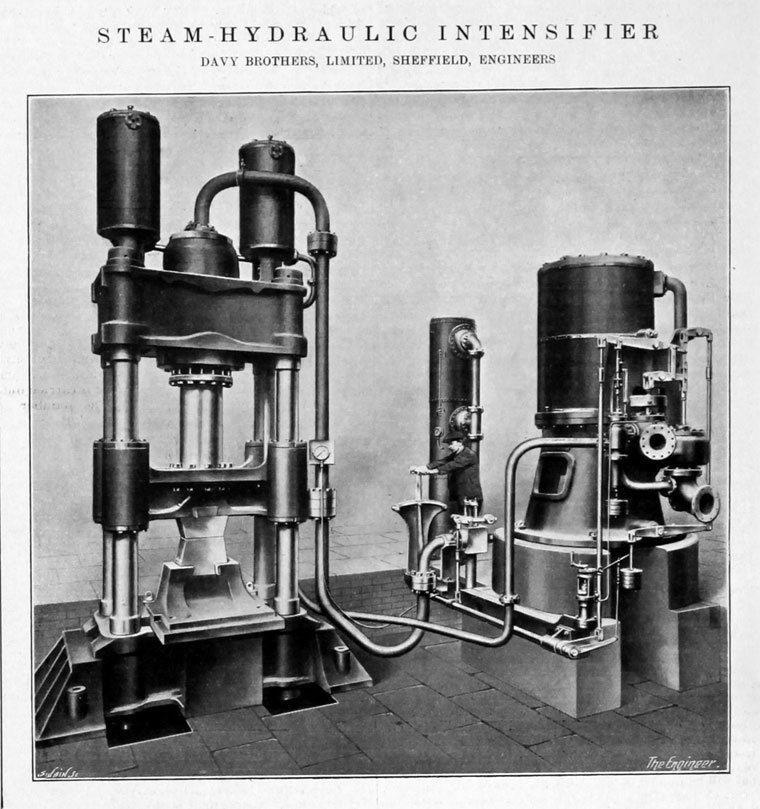 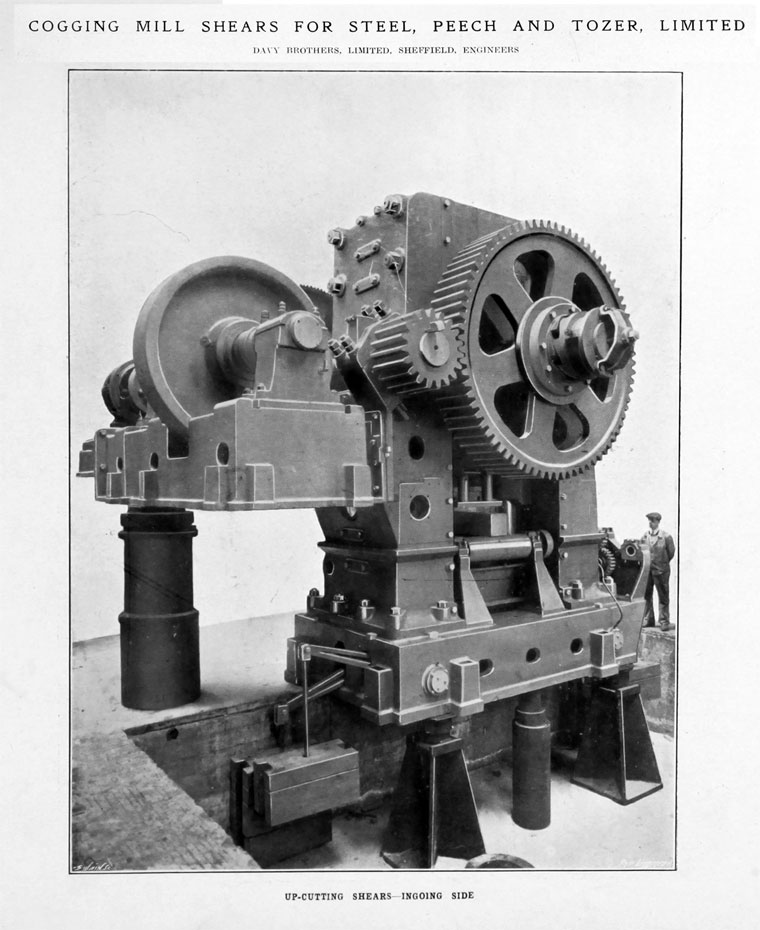 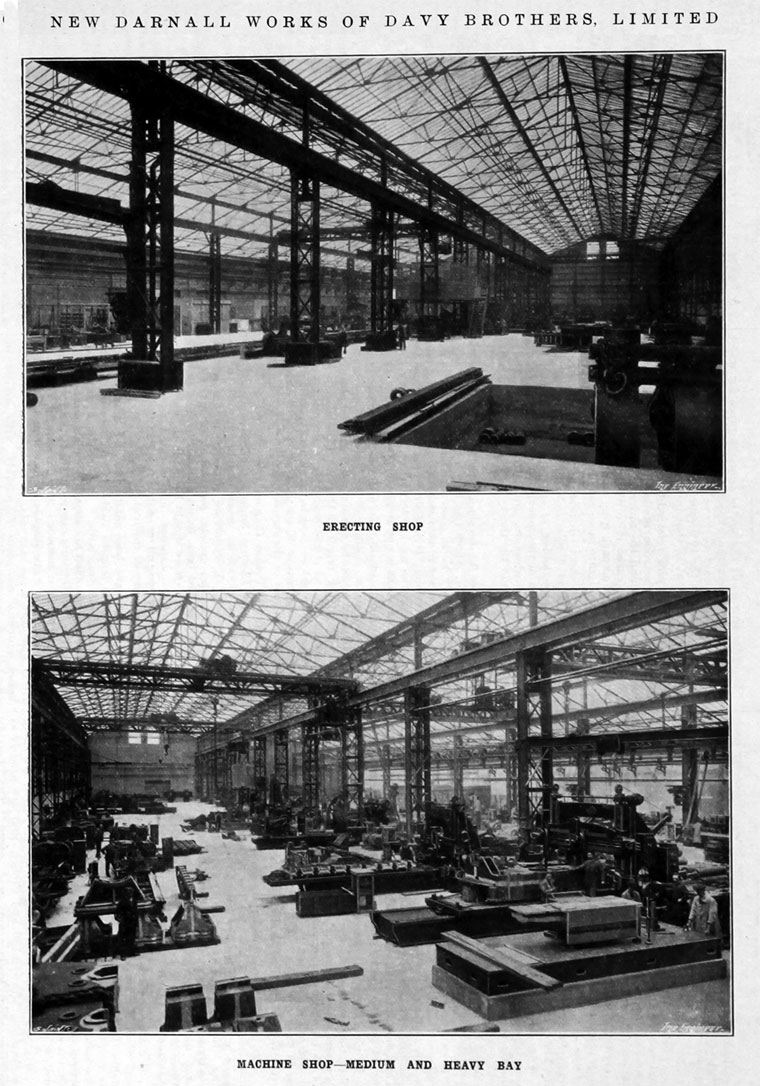 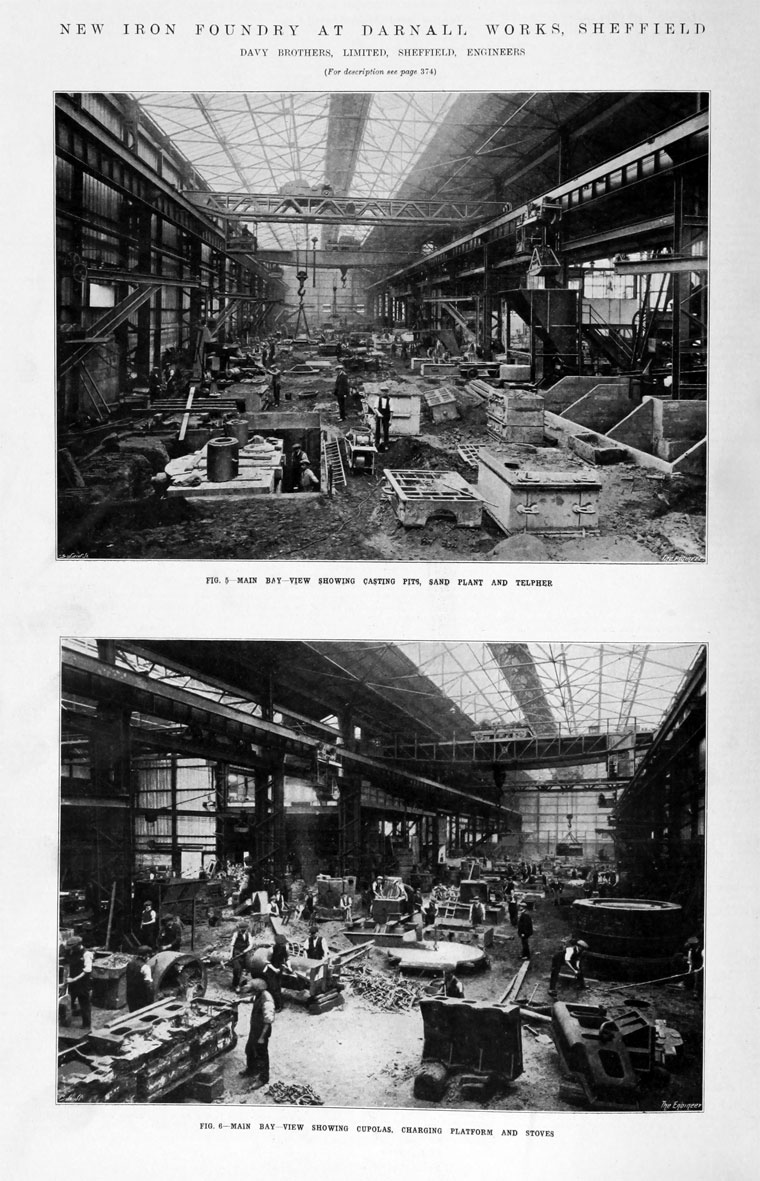 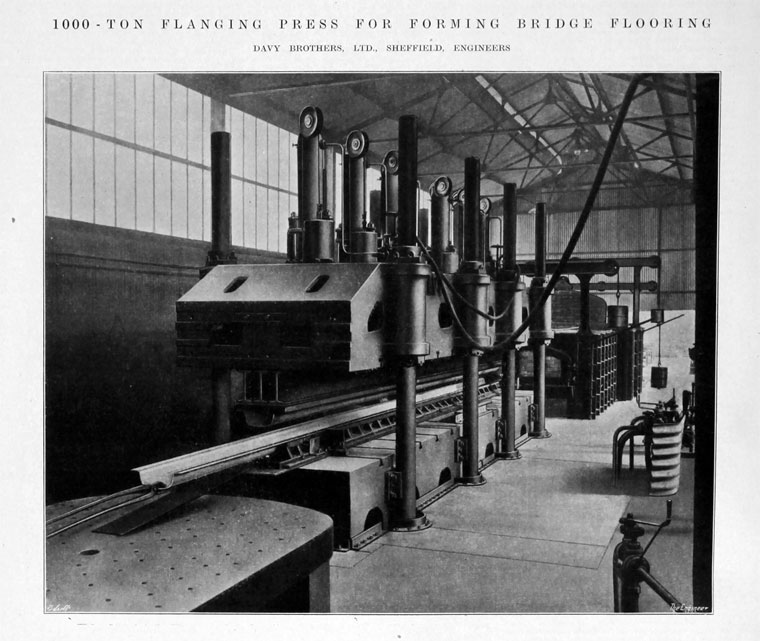 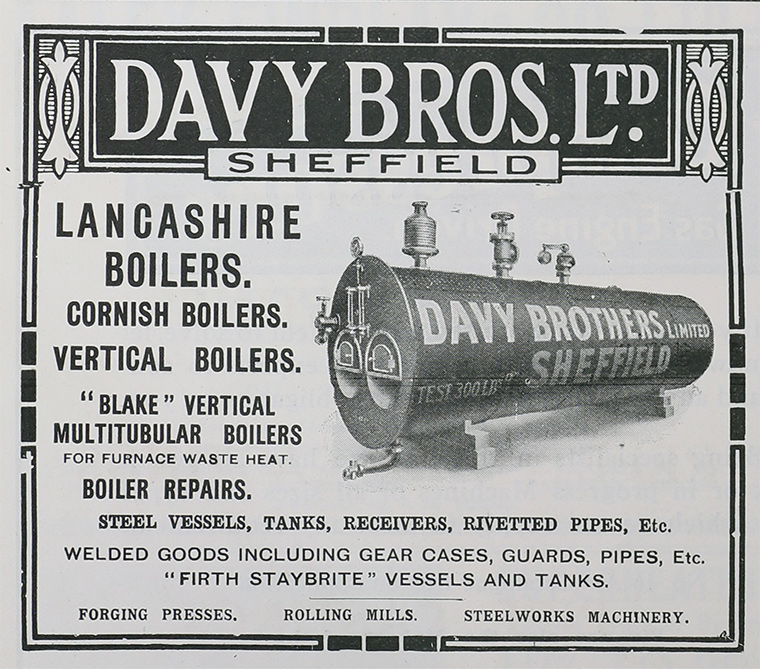 1840 Built the first railway locomotive in Sheffield, for the Sheffield and Rotherham Railway. It had a 2-2-2 wheel arrangement, but the leading and trailing wheels were driven from the centre wheels by 4" belts. This system was invented by William Vickers.[1]

At some point between 1847 and 1852 they moved to Park Iron Works, Sheffield.

1856 Yorkshire Agricultural Society, Grand Show at Rotherham: 'Messrs. Davy, Park Iron Works, exhibit a six-horse portable steam engine, of strong make and well adapted for all purposes of a farm yard. We must say that although there are other engines in the field which have more finish about them than this engine, we believe that this will show itself inferior to none. There is one remarkable feature the history of this identical engine — namely, that it is only five days ago since it was commenced!!' [2]

1861 On the death of Joseph Davy, the partnership between him, David Davy and Dennis Davy, as Davy Brothers, was dissolved; the business was then continued by David Davy[3]

1864 Letter: 'Sir, — Your paragraph respecting a large anvil block in this morning's paper came under my observation, and I should feel obliged if you would say that it is to form the bed for one of a number of hammers now being made by my firm for Messrs. Burys and Co.; and it may perhaps be worth your while to chronicle the fact that nine-tenths of the hammers put down here for the last three years emanate from the same source. I am, sir, yours truly, For Davy Brothers, ALFRED DAVY. Park Iron Works, ......' [4]

1871 Dissolution of the Partnership between Alfred Davy, David Davy, Abraham Davy the younger, Abraham Davy, and Walter Scott Davy, of the Park Iron Works, in Sheffield, Steel Rollers, and Millwrights, trading under the firm of Davy Brothers, as regards Alfred Davy. The other partners continued to trade as Davy Brothers; whilst Mr. Alfred Davy was to trade on his own account[5]

1872 Incorporated as a public Limited Company. The company was registered on 10 October, to acquire the business of the firm of the same name as engineers, boiler makers and steel rollers. [6]

1901 Directory: Davy Bros of Park Ironworks, Foley Street, Sheffield. Makers of Lancashire, Cornish and marine boilers up to 200lbs working pressure and up to 12ft 6in diameter. [8]

1904 The "River Don engine" was one of 4 engines built to the same design at Davy Bros, Park Iron Works, Attercliffe, between 1904 and 1905. Its purpose was to drive the new Armour Plate Mill at the Grimesthorpe Works of Cammell, Laird and Co and was subsequently moved to the River Don Works. Now preserved and run on steam at Kelham Island Museum. Another of these engines went to John Brown's Atlas Works, one went to Japan but the destination of the 4th is not known.

1932 Received an order worth £202,000 from the Russian Government for a complete plant for producing railway wheels on a patent process of the Edgewater Steel Co of Pittsburgh. Work to be carried out in conjunction with Taylor Brothers of Manchester[14]

1937 Change of name to Davy and United Engineering Co reflecting the agreement with United Engineering and Foundry Co of Pittsburgh that both companies would manufacture and sell the products of the other in their respective areas; also exchange of directors[17].

The 1903 O.S. map[18] shows the Park Iron Works as a collection of buildings of various shapes and sizes along the southern bank of the River Don. The western end was on Leveson Street, overlooked by Attercliffe Road Station. The southern face of the main building was on Foley Street. This street joined Effingham Street, which then bounded the southern flank of the works. There was an internal railway system, but there was no connection to the main railway systems. The northern corner of the works coincided with a wide weir on the River Don. On the opposite side of the river were the Crescent Steel Works and Norfolk Bridge Steel Works.

The book 'Sheffield Steel' by K C Barraclough (Sheffield City Museums, 1976) includes several Davy Bros works photos. One is an exterior view taken from the junction of Foley and Leveson Streets c.1900. This shows the south western end of the works, dominated by a tall two-bay building whose loading bay opens onto Leveson Street. One of the c.1900 interior shots shows assembly work being undertaken in one of these bays, which is served by a rope-driven overhead crane. These buildings were demolished in 2007, as can be seen in an online photograph [19]. Although the old buildings have gone, the boundary wall along Effingham Street may be original, being built of random stone blocks, capped with what appear to be slag blocks.

Another c.1900 photo shows an apparently older machine shop, with a less than ideal layout. The building is low, with a wooden roof structure, and individual wall- or post-cranes are installed to serve the large machine tools. These were evidently used in conjunction with a narrow gauge railway running through the shop.

Note that Park Iron Works was originally occupied by Booth and Co.