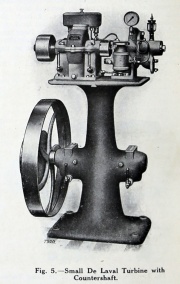 1902 From 14th annual meeting of Greenwood and Batley: 'Steady progress continues to be made with the De Laval steam turbines for electrical generation, pumping, and other purposes. The works of the English De Laval Steam Turbine Company, adjoining Albion Works, in which company Greenwood and Limited are large shareholders, are completed, the plant is installed, and the manufacture of turbines sa now being carried on there. The directors look forward to a steady increase in the sales in this important branch of the engineering business.'[1]

By 1923 The name of the English De Laval Steam Turbine Company had been changed to the Albion Turbine Co; the company secretary was at Greenwood and Batley's offices[4]

1901 'The Admiralty has requested Messrs. Greenwood and Batley, of Leeds, the owners of the British and Colonial patent rights of the De Laval steam turbine, to send one of their more powerful turbines to Devonport Dockyard so that it may subjected to a series of experimental tests.'[5]

1905 'STEAM TURBINES AT THE DOVER GASWORKS
At a meeting of the Southern District Association of Gas Engineers and Managers, held at the Hotel Cecil, London, Thursday, November 9th, Mr. R. Herring, of Dover, read the following paper, entitled: "A High Speed Exhauster for Pressure Raising in Gas Mains" ......
'After making careful enquiries, the Sturtevant Engineering Company, of London, assured that their high speed gas exhauster, directly geared to a De Laval steam turbine, would fulfil the conditions I asked.
"This being a new departure in gas pressure raising, and the first gas exhauster directly geared to a steam turbine, I could not easily decide as to its suitability for the purpose; but the Company were confident it would be successful. With this assurance, I recommended my Directors to adopt the plant; and in March, 1904, an order was given them to carry out the work. …… The arrangement has always worked well and to my entire satisfaction; and the promises of the makers have been fullv realised.
"The turbine runs at a very high speed of 32,000 revolutions per minute, directly geared to the exhauster running at 4000 revolutions per minute and increases the gasholder pressure 120-10ths. It is geared down eight to one; the usual practice being to gear up. The advantages of the former method will be easily recognized. The plant has a working capacity of 2,250,000 cubic feet per 24 hours; the floor space occupied being 36 inches by 20 inches. The connections are 12 inches in diameter; the whole apparatus being installed in a small room 10ft. by 7ft. 6in. This is quite large enough for a 5 million cubic feet set.
"From the foregoing particulars, it will be observed that the machinery is exceedingly compact, and also very light considering the work done. The total weight of the complete plant, including the bed plate, is 7 cwt. 0 qrs. 20 lbs. Compare this with a plant of the same capacity, in which the flywheel alone weighs more than this complete high speed of apparatus. The moving parts of the turbine are the wheel shafts and pinion; the total weight being 2 lbs. 6 ozs. This, for a 5 brake-horse-power engine, is less than ½ lb. per horse power. The turbine wheel is 5 inches in diameter, the pinion: 1 inch, and the smallest part of the shaft 3-16 th inch — all made of high grade steel, perfectly finished. It is a splendid example in every way of accurate machining—especially the double helical gearing, which runs at a circumferential speed of 30 yards a second. When this was examined Monday last, I could not detect the least signs of wear in any part. I may mention that the makers of the turbine were Messrs. Greenwood and Batley, of Leeds.
"As previously mentioned, I have the shaft and other parts of this machine, as well as photographs and plans of connections, for the members' inspection. Also a shaft for a 1½ brake horse-power turbine, which looks like a well-finished model, but is actually part of practical working machine constructed to run at 40,000 revolutions per minute, geared to a 20,000 cubic feet per hour gas exhauster. This is the smallest size made for pressure raising.
'The exhauster is made of thin sheet steel 17¼ inches in diameter, mounted on a shaft 1 inch in diameter; and the speed is 4000 revolutions per minute. At my suggestion, this was fitted with a bearing on the inlet side. Previously they were overhung. By its adoption, higher speeds are possible, and absolutely steady running ensured. All the Sturtevant exhausters are thus fitted.....'[6]

1906 'Turbines for Fishing Boats .....By way of experiment, Mr. Hamilton, Hunter's Quay, is at present fitting out a fishing boat, lying in Anstruther Harbour, between 50 and 60 feet keel, with a turbine engine and twin propellers, for the purpose of proving that the ordinary fishing boats can be fitted in this way, and obtain the speed of steam drifters at far less initial cost and actual working expenses. ..... The turbine has been supplied by the English De Laval Company, and is a thoroughly tried machine. It runs fast, but is geared down the usual way, the shafts being slowed down still further by using chain drivers of the English horse chain make, with different sized sprocket wheels, which permit the choice of the most efficient number of revolutions for the propellers and the right pitch for the work. The condenser of the Ljungstrom type. The boiler is fired by lucigen oil, which costs 1 3/4d. per gallon, with a burner of the maker’s invention, which has al [bell] metal, and can be straightened on getting bent. The pumps are chain belt driven, and start and stop with the turbine. The steam valve can only be got at when both propellers are out in the working position. Mr. Hamilton anticipates that the power available between the sail and the steam will be equal to about 100 horse-power for the greater part the year, and if this expectation is realised, the adaptation of the existing boats in the way proposed will be of great benefit to fisherment generally. .....' [7]