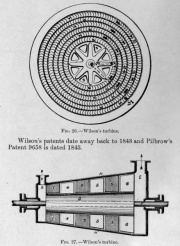 Two of the turbine designs proposed by Wilson[1]

Born 31 January 1796 at Kirknewton, where he received the rudiments of an education.

For some time he followed the occupation of a mechanic.

Moved to Edinburgh to study to become an architect, but was drawn to the church, and studied at Edinburgh University, and became an M.A. Studied theology at United Secession College.

'An esteemed member of the congregation, well qualified to judge, writes this:-

"Dr Robert Wilson in his latter years devoted a good deal of time towards working out a rotatory steam engine of a very novel character. This he patented, and had an engine made to his designs, which wrought very well, but was more expensive for fuel than the average engine of the time. By a slight alteration of the design, however, he found it made an admirable water-wheel, and several wheels on this principle were constructed in different parts of the country. To older engineers the 'Wilson Wheel' is still a familiar name, and at the present time part of the machinery at the Greenock Foundry is driven by one of them. Recent events have shown that Dr. Wilson's steam rotatory engine was right in principle, but had been introduced before its time. In recent years a demand for rapid driving engines has sprung up for driving dynamos for use in the production of electricity. Among the competitors in producing these engines is the Hon. Mr. Parson, son of Earl Rosse, of telescope fame. This gentleman has been successful in constructing a combined steam turbine and dynamo, which is now largely used. The steam turbine used by him is constructed on the same principle as one of the designs included by Dr. Wilson in his patent specification, the higher pressure of steam in use at the present day giving the conditions necessary to success which were wanting when Dr. Wilson conducted his experiments."

The foregoing biographical information is from 'A Century of Church Life and Work, Being a Historical Sketch of Trinity United Church, Greenock, and its Ministers' by James Frame, James McKelvie & Sons, 1893

He obtained patent No. 12,026 in 1848 for steam turbines[2]. Two of the drawings[3], reproduced above, show conceptual designs of steam turbines, which were decades ahead of their time. The axial flow and radial flow compound arrangements outlined by Wilson show a remarkable understanding of how steam could be be used efficiently in a steam turbine, and in fact such arrangements came to be widely used much later, being painstakingly developed by Charles Parsons. However, there is no evidence that these concepts were developed to any tangible form, and indeed any attempts at practical application would have faced enormous challenges at that time.

Charles Parsons described Wilson as '....one of the most conspicuous workers in the design of the compound turbine… The patent is of unusual length and rich in detail, and describes radial flow and parallel flow compound turbines design for moderate ratios of expansion. The blades and guides were proposed to be fastened by casting them into the hub and case, a method occasionally used at the present time. The principles of Wilson’s design are generally correct, but the proportions of his turbines are extravagantly incorrect, the blades being too large and too few for success. I had a model made of Wilson's turbine eighteen years ago, and under steam all that could be said is that it went the right way. I do not think that Wilson can have made a model and tested it before he applied for his patent…'[4]