Difference between revisions of "Edward Thompson" 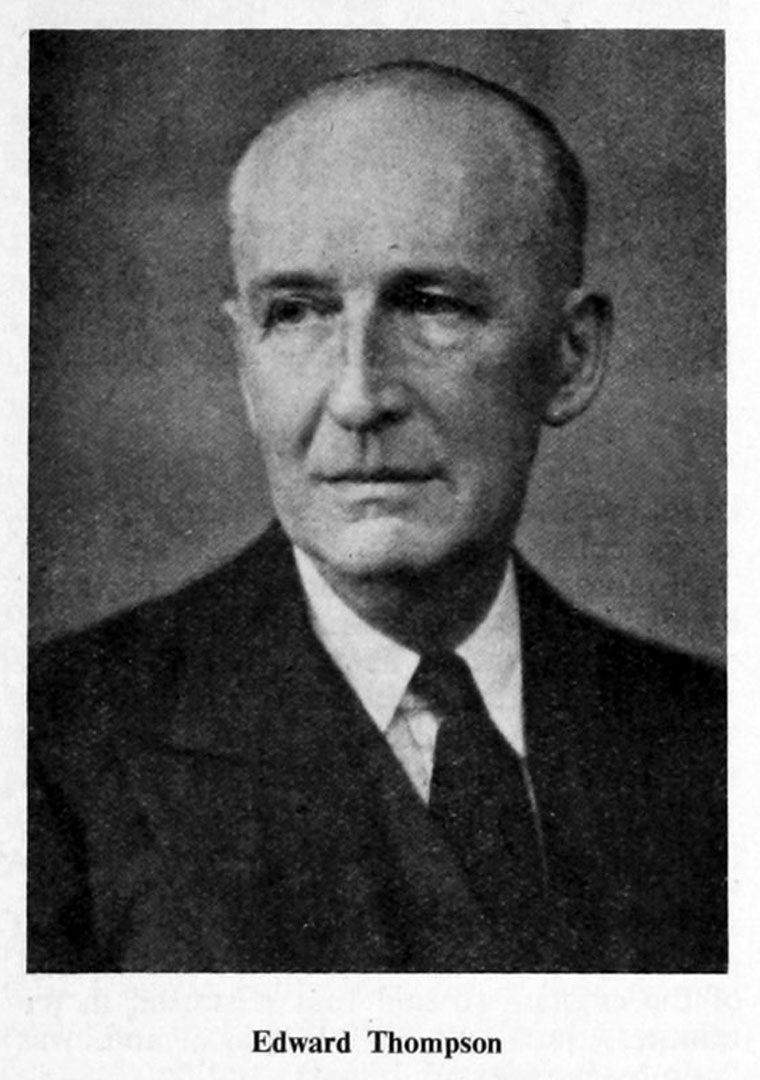 Edward Thompson came from an academic background having taken Mechanical Science Tripos at Pembroke College, Cambridge. This is unlike is predecessor Nigel Gresley who gained practical experience as a pupil at Horwich Works. After graduation Thompson working in both industry and the railways for a while, when in 1912 he was appointed Carriage and Wagon Superintendent for GNR. He remained at this post for 18 years until he became Workshop Manager at Stratford Works in 1930. This was his final post before becoming CME of LNER in 1941 after the untimely death of Nigel Gresley. Edward Thompson retired from the post of CME in 1946.

Its widely know that Gresley and Thompson disagreed on a number of issues. Many have interpreted this bitterness as NER (Thompson) vs. GNR (Gresley). Thompson happened to be the son-in-law of Sir Vincent Raven. The biggest disagreement between the two was on Gresley’s 3cyl conjugated valve gear. While this valve gear arrangement worked well during peace time, it experienced problems due to low maintenance during World War 2. This did give Thompson some justification for the criticism of the design.

When Thompson was appointed CME of the LNER he started a much needed standardisation programme. This program demonstrated Thompson's dislike for Gresley’s engineering practices. Many notable Gresley designs were rebuilt under this practice including the P2 Mikados, V2 Express goods and A1 Pacifics. The A1 chosen for rebuilding was non other than ‘Great Northern’, this being the original Gresley prototype for the class. Some have stated that this rebuild was sheer vindictiveness on Thompson’s part towards his old chief.

While Thompson criticised many of Gresley’s practices, equal comment can be made about many of Thompson’s designs. His Pacific rebuilds where not the best of designs. They all retained 3 cylinders, but with divided drive and 3 sets of independent Walschaerts valve gear. Thompson attached great importance to having connecting rods equal in length. This was not necessary, and as a result the outside cylinders were placed behind the front bogie with the inside cylinder well forward. This arrangement created long exhaust channels and encouraged flexing and fracture of the loco frames. All of his Pacifics where particularly prone to wheel slips. Such were the problems with his Pacifics they preceded many of the older counterparts to the scrapheap.

Thompson’s L1 class suburban tanks also left a lot to be desired - they were a mechanical disaster. The 5ft 2in wheels were to small for the fast outer suburban services and they quickly knocked themselves apart. The axle boxes suffered, water tanks split, oil pipes broke off, and crossheads wore rapidly.

On the other hand Thompson built one of the most successful LNER designs, the Thompson B1. This was a simple two-cylinder design mixed traffic engine, with a 4-6-0 wheel arrangement. Over 400 of these locos were built between 1946 and 1952 four years after thompsonns death / in a total of 8 batches. The boiler used in the class formed the basis for the rebuilding of many pre-grouping classes, including the ex-GCR O4 2-8-0 freight locos. The Thompson B1 compared equally with the LMS Black 5 engines during the BR exchange trials. It could be argued that the B1 is a better engine than the Black 5 due to its cheaper cost of manufacture.

We record with regret the death of Mr. Edward Thompson, of 61, Westgate Bay Avenue, Westgate, Kent, which occurred at Brymbo, Wrexham, on July 15th.

Mr. Thompson, who was seventy-three, was formerly Chief Mechanical Engineer of the London and North-Eastern Railway.

Edward Thompson was born at Marlborough, on June 25, 1881, and was educated at Marlborough College and at Pembroke College, Cambridge, where he gained a Mechanical Science Tripos in 1902.

In the following year he became a premium pupil in the works of Beyer Peacock and Co., Ltd., Manchester, and thereafter spent a year or so in the running department of the old Midland Railway at Derby, under the late Sir Cecil Paget, who was then works manager.

Mr. Thompson left the Midland in 1905 to join the staff of the Royal Arsenal at Woolwich, but he resumed his railway career a year later when he was appointed to a position in the running department of the North-Eastern Railway at Hull.

From there, he went to Gateshead in 1909 to become assistant divisional locomotive superintendent of the North-Eastern.

Three years later, Mr. Thompson transferred to the Great Northern Railway as carriage and wagon superintendent at Doncaster. His career with the G.N.R. was interrupted by the first world war, during which he served in France on the headquarters staff of the Director-General of Transportation, being twice mentioned in dispatches and awarded the O.B.E. (Military Division).

On the death of Sir Nigel Gresley in 1941, Mr. Thompson was appointed Chief Mechanical Engineer of the L.N.E.R., from which position he retired in June, 1946. Just before his retirement, an L.N.E.R. class "A2" "Pacific" which was the 2,000th locomotive to be built at the Doncaster works, was named "Edward Thompson" in his honour.

Mr. Thompson had been a member of the Institution of Mechanical Engineers since 1929.