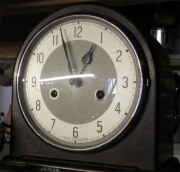 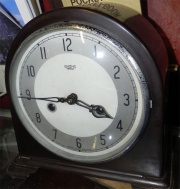 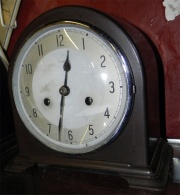 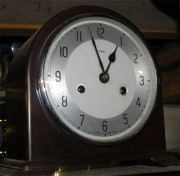 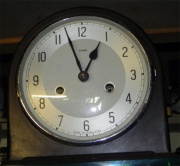 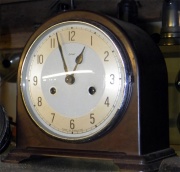 1929 The company was formed to manufacture clocks in the manner of the German factories. C. Schatz, the main force behind the company obtained suitable premises and brought in machinery and a core of workers from Germany.

1932 The first movements were shown and sold to the trade in February.

1933 Towards the end of the year, it became apparent the amalgamation or outright sale of the company was inevitable due to the low prices at which competing German products were available.

Smiths then stepped in and bought out the shareholders, but allowed the directors to remain and the company continued production from its premises at Pretoria Road, Edmonton.

It is probable that the quantity of clocks that Smiths were then buying would not be enough to keep Enfield viable, so the decision was made to allow them to continue to trade independently, though doubtless Smiths would have ensured priority supplies.

Enfield developed new lines and were well established when the war started. During the war they continued to make some clocks but were mostly on war work.

1940s In the late 1940s, the Smiths Group reviewed their position and decided to close down the Edmonton factory.

It is at about this time that The Enfield Clock Co ceased to advertise independently and became just another part of the Smiths Group.

1948 An Enfield advertisement in the March Horological Journal adds: "A Smiths of England product" to their usual header and by December 1948 the header was Smiths Enfield "All British Clocks".

1950 By September, the header was "Smiths Enfield Clocks" and it is believed that Enfield ceased to advertise independently after that.

c1951 The factory in Pretoria Road did not relocate to Gurnos Works, Ystradgynlais, Swansea until 1951 or even later.

Pretoria Road works was situated on a trading estate and the building's next occupant was 'Freemans' the very large mail order company. They later moved to a large purpose built warehouse in Peterborough. The company next door was operated by the soft drink company 'Tizer' (The area today is still in industrial use).[2]