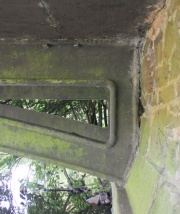 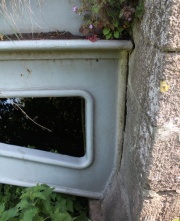 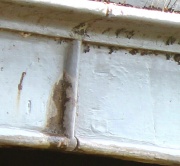 A minor detail: Note the square headed countersunk bolts at the junction of the two half ribs. Such fixings are found on James Green's Nynehead Aqueduct

'First Bridge' is the official name of the bridge, not a claim to priority!

This is a small cast iron bridge designed by James Green in 1839 to replace the bridge over the Spratford Stream, washed away by flooding of the River Culm.[1]

The bridge is of plain and simple design for economical construction, and continues to carry traffic on a minor road.

There are just three arch ribs, each assembled from two castings. The arches spring from, and rest on sloping and stepped stone blocks.

It is one of five known survivors of iron/masonry bridges designed by James Green. The others being two aqueducts at Nynehead, the iron ribs and deck plates of a former road bridge, reassembled and preserved at Nynehead, and Trefusis Farm canal bridge. Information on the Trefusis bridge here.

1839: 'The Surveyor's Report was presented by Mr Green, and the Court was occupied for a very considerable time upon it. Suffice it, that the work of the erection an iron bridge at First Bridge, Cullompton, at an expense not exceeding £600. was ordered to be proceeded with. The work to be tendered for in the usual way.'[2]