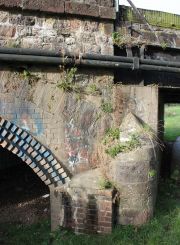 This clearly shows the old stone arch, later brick arch and brick base to take the arch thrust, and the brick spandrels

Upstream side. The 'teeth' are not there for decoration. They simply result from the staggering of the brickwork joints

See here for photo and map.

It was originally a three-arch masonry bridge carrying the railway line between St. Thomas Station and St David's Station in Exeter over a substantial waterway. The waterway is long gone, but the piers' cutwaters remain as a reminder of the former presence of flowing water. The topography around the bridge has been changed by the deposition of spoil.

A point of interest lies in the fact that at some point one of the arches was removed and replaced by a plate girder bridge. This would have imposed thrust loading on the remaining portion of the pier. For this reason, and perhaps to increase the load capacity of the bridge, additional brick arches were constructed beneath the original stone arches. The gaps (spandrels) between the old and new arches were infilled with brickwork at the exposed faces, and by some other method within. The spandrels on opposite sides of the arch are not symmetrical.

The arch brickwork is in three layers, which were laid parallel (rather than in helical courses, which would be difficult in this situation). An open wooden formwork would have been needed during construction of the new arches, with planks inserted to support the bricks as work progressed.

Thanks to the author of this article for pointing out that this is a more interesting bridge than might first appear.[1]

1844 'THE RAILWAYS FLOODED AT EXETER .... At Stoke bridge, about forty yards of tbe railroad bad been carried sway. As it was, the whole of St. Thomas's Marshes were inundated to the depth in some places of several feet; and the overflow, kept by the continuation of tbe South Devon Railway, out of the accustomed channel along tbe banks, found a new course, at the back of marshes, and through the Skew Bridge, which has been raised over the Exwick and Foxhayes pathway. We stood on the Skew Bridge at five o'clock in the afternoon, when the vast sheet of water above, and the impetuous rushing through the channel under our feet, formed a novel and striking scene. Near us, the raised bank crumbled away piece-meal; in a short time many yards were washed down, and a few hours after the beautiful Skew Bridge yielded to the torrent, and its three arches were swept sway. On the side most exposed, there is not one stone left on another. Wetern Times.'<ref> Western Courier, West of England Conservative, Plymouth and Devonport Advertiser - Wednesday 20 November 1844 </ref.